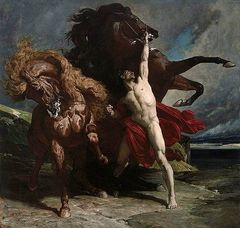 The horses of Achilles were named Xanthos (behind) and Balios with their chariot driver, Automedon; according to the Iliad, the horses could predict the future and are aware that Achilles will be taking them into combat where Achilles will set in train his death. Accordingly, Automedon struggles with the horses who see the impending disaster. Painting 1868 by Henri Regnault.

The Iliad is the first great work of European literature, an ancient Greek epic poem traditionally said to be by Homer. It was probably composed around the seventh century BCE or just before, in dactylic hexameters, but came from, and used, a tradition of oral verse, with many stock phrases. Peisistratus, tyrant of Athens is credited with first arranging for it to be written down.

The poem mainly describes a few days in the final year of the Trojan War, and it gets its name because Ilios was an alternative name for Troy. Among the besieging Greeks a dispute arises between their great champion, Achilles, and the Greek leader, King Agamemnon. In order to stop a plague Agamemnon has been forced to restore one of his captured women to her father, and he therefore takes one of the captives of Achilles, who thereupon refuses to take any further part in the fighting. The Greek forces led by Agamemnon, his brother Menelaus, Diomedes, Odysseus, and the two Ajaxes, and advised by the aged Nestor, are now brought near to defeat by the Trojans under their great champion Hector. Gods take part on both sides, but Zeus retains overall control of the outcome. Eventually Achilles allows his friend Patroclus to fight in support of the Greeks, wearing his own armour. Hector kills Patroclus, and Achilles' revenge killing of Hector sets in train his own death, which is predicted but not described. The poem ends with king Priam coming to Achilles to seek the return of his son Hector's body, and the funeral games which followed.

The Iliad was a cornerstone of culture in Ancient Greece, and has influenced countless other literary works. It has been copied and translated numerous times.