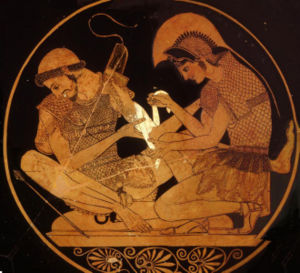 Achilles (Greek Ἀχιλλεύς, transliterated Akhilleus or Achilleus) was a hero of the Greek Acheans in the legends of the Trojan War, and the principal character of Homer's 8th century BC epic poem the Iliad. The son of a sea-nymph, Achilles was a fearsome warrior who chose a short, glorious life over a long and undistinguished one. During the Trojan War, in his wrath over the death of his companion Patroclus, who some consider his lover, he killed the Trojan hero Hector. According to later traditions he was killed by an arrow to the heel, the only part of his body which was not invulnerable.

The Iliad[1] begins nine years into the Trojan War, but contains passages explaining the backstory. Achilles' father was Peleus, king of the Myrmidons of Phthia in Thessaly, and his mother was the sea-nymph Thetis. He was educated in eloquence and the arts of war by Phoenix, and in the arts of healing by the centaur Cheiron. His mother foretold two possible futures for him: if he took part in the Trojan War, his life would be glorious but short, and he would not return home; if he did not, his life would be long but unremarkable. Achilles chose the former. He led fifty ships of his countrymen to Troy, and became the Achaeans' most formidable warrior, until his dispute with the Achaean high king Agamemnon.

As part of the sharing of booty from the sacking of the towns around Troy, Agamemnon and Achilles were each given a beautiful captive woman as a slave. Agamemnon's prize, Cryseïs, was the daughter of a priest of Apollo, who offered a ransom for her freedom, and when Agamemnon refused, prayed to Apollo to send a plague against the Achaeans. Achilles persuaded Agamemnon to free Cryseïs and stop the plague, but Agamemnon demanded Achilles' slave, Briseïs, in compensation. Outraged at this insult to his honour, Achilles withdrew himself and his men from the fighting, and Thetis used her influence with Zeus to persuade him to favour the Trojans until the Achaeans treated her son with honour once again.

With Zeus on their side, the war began to turn in the Trojans' favour, and the Achaeans sent an embassy to Achilles, offering him great gifts and the return of Briseïs in exchange for a reconciliation and return to the war, but Achilles refused. When the Trojan prince Hector stormed the Achaean naval camp, Achilles' closest friend Patroclus begged him to join the battle. Achilles still refused to fight himself, but agreed to allow Patroclus to wear his armour and lead the Myrmidons to the Achaeans' aid. The Trojan assault was repelled, but Patroclus was killed in the battle by Hector, and Achilles was overcome with grief and rage. Thetis provided him with new armour made by the craftsman-god Hephaestus, and he reconciled himself with Agamemnon and re-entered the fray, refusing to eat or drink until he could avenge Patroclus and rescue his body. In the renewed fighting, Achilles encountered Hector, and after a long chase around the walls of Troy, killed him and dragged his body behind his chariot back to the naval camp. He held funeral games for Patroclus, and cremated his body along with twelve Trojan prisoners as a sacrifice to his spirit. With the assistance of Hermes, the Trojan king Priam visited Achilles in his tent and persuaded him to return his son Hector's body for his funeral rites.

Achilles' death does not occur in the Iliad, which ends with Hector's funeral, although it does contain allusions to his demise at the hands of Apollo and Paris at the Scaean gate before the fall of Troy. Homer's Odyssey mentions his funeral, after which his cremated remains were buried under a mound on the Hellespont, in the same urn, a present from Dionysus to Thetis, as those of Patroclus.[2]

Achilles and Patroclus as lovers

Achilles and Patroclus are not stated to be lovers in the Iliad, although they use unusually intimate language towards each other,[3] and such an interpretation of their relationship seems to have been made as early as the 5th century BC by Aeschylus.[4] This interpretation was not uncontroversial among the classical Greeks: Plato[5] and Aeschines[6] accept it, but Xenophon rejects it, arguing that Achilles and Patroclus were simply comrades.[7]

However, homosexuality in ancient Greece was not comparable to modern-day homosexuality and same-sex sexual relationships, particularly among men in military service, were commonplace among the various Greek city-states.[8]

One well-known tradition which does not appear in Homer concerns Achilles' near-invulnerability. The earliest version of this comes from the Argonautica of Apollonius of Rhodes in the 3rd century BC, in which his mother Thetis attempted to make him immortal as a baby by anointing him with ambrosia and putting him on a fire to burn away the mortality he inherited from his father Peleus. Peleus did not understand and interrupted the ritual, and Thetis left him in a rage.[9] The better known story, in which Thetis attempted to make him immortal by dipping him in the river Styx, but left the heel she gripped him by vulnerable, is comparatively late, first alluded to in the Roman poet Statius' incomplete epic, the Achilleid, in the 1st century AD,[10] and spelled out in Fulgentius' Mythologies in the 5th century AD.[11]

Achilles' childhood is expanded upon by later writers. At the age of six, he was able to kill lions and wild boar, and run so fast he could hunt deer without dogs, impressing Artemis and Athena.[12] When he was nine, it was prophesied that Troy could not be taken without him. Thetis, aware of the prophesy that if he went to Troy he would not return, tried to protect her son by hiding him among the daughters of Lycomedes, king of the island of Skyros, disguised as a girl called Pyrrha. During his time there he fathered a son, Neoptolemus, by Lycomedes' daughter Deïdameia. Odysseus discovered him by bringing, among presents for Lycomedes' daughters, a shield and a spear. He had his trumpeter blow his trumpet as if the island was under attack, and Achilles reached for the weapons. His identity revealed, he agreed to go to Troy.[13]

The sacrifice of Iphigeneia

Another tradition involving Achilles, best represented by Euripides' 5th century BC play Iphigeneia at Aulis,[14] concerns the sacrifice of Agamemnon's daughter Iphigeneia before the Achaean fleet set sail for Troy. The fleet, gathered at Aulis, was prevented from sailing by unfavourable winds, the cause of which was identified as a debt owed by Agamemnon to the goddess Artemis, who demanded Iphigeneia's death as payment. Agamemnon summoned her to Aulis under the pretence that she was to be married to Achilles, but when Achilles discovered the deception he swore to defend her, against the entire Achaean army if necessary. However, Iphegeneia agreed to be sacrificed to allow her father to take Troy. In Iphegeneia at Aulis, Artemis substituted a deer as the sacrifice at the last minute, and took Iphegeneia to live with the gods. In other versions, for example Euripides' Electra[15] or his older contemporary Aeschylus' Agamemnon,[16] Iphegeneia was indeed sacrificed, in revenge for which Clytemnestra murdered Agamemnon after his return from the war.

The healing of Telephus

When the Achaeans, not knowing the way to Troy, attacked Mysia by mistake, Achilles wounded Mysia's king, Telephus, in the thigh with his spear. The wound did not heal, and an oracle told him that it would only be healed by the spear that delivered it, so Telephus came to the Achaeans, and Achilles healed him by scraping rust from his spear into the wound. In return Telephus guided the Achaeans to Troy.[17]

Homer, as we have seen, alludes to Achilles death at the hands of Paris and Apollo at the Scaean gate. Sophocles makes a similar allusion in his 5th century BC play Philoctetes, in which Achilles' son Neoptolemus says his father was not killed by a mortal man, but by an arrow of Apollo.[18] Ovid says that Neptune, angry that Achilles had killed his son Cycnus,[19] asked Apollo to intervene on his behalf. Apollo appeared to Paris, who was shooting his bow at the Achaean army, pointed out Achilles, and guided his arrow to his target.[20] Hyginus says that Apollo took the form of Paris, and shot Achilles because he had boasted that he alone had reduced Troy.[21] Pseudo-Apollodorus says it was because Achilles had killed Apollo's son Tenes, king of Tenedos, in the early stages of the war.[22] Another possible reason was that he had killed Priam's son Troilus in Apollo's sanctuary.[23] The idea that the arrow hit Achilles in his vulnerable heel is mentioned by pseudo-Apollodorus[24] and Quintus Smyrnaeus.[25]

Odysseus and Ajax recovered Achilles' body, and a dispute arose between them over who should have his arms. Odysseus was awarded them, and Ajax killed himself. Odysseus then brought Achilles' son Neoptolemus from Skyros to join the fighting.[26] After the sack of Troy, the Achaeans sacrificed the Trojan princess Polyxena at Achilles' grave.[27]