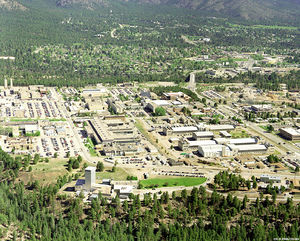 Los Alamos National Laboratory (LANL), located in Los Alamos, New Mexico, is one of several U.S. Department of Energy (DOE) national laboratories. It is noteworthy as the site where the first atomic weapon was developed under a heavy cloak of secrecy during World War II, and has been known variously as Site Y, Los Alamos Laboratory, and Los Alamos Scientific Laboratory. Today, it is recognized as one of the world's leading science and technology institutes.

Since 2006, LANL has been managed and operated by Los Alamos National Security, LLC (LANS).[1] LANL's self-stated mission is to ensure the safety, security, and reliability of the nation's nuclear deterrent.[2] Its research work serves to advance bioscience, chemistry, computer science, earth and environmental sciences, materials science, and physics disciplines.[3][4] 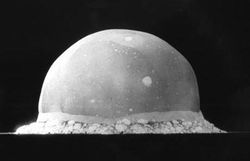 The Manhattan Project was the secret United States project conducted primarily during World War II with the participation of the United Kingdom and Canada that culminated in developing the world's first nuclear weapon, commonly referred to at that time as an atomic bomb.

The project was initiated in 1939 by U.S. President Franklin Delano Roosevelt after he received a letter from physicist Albert Einstein (drafted by fellow physicist Leó Szilárd) urging the study of nuclear fission for military purposes, under fears that Nazi Germany would be first to develop nuclear weapons. Roosevelt started a small investigation into the matter, which eventually became the massive Manhattan Project that employed more than 130,000 people at universities across the United States, the United Kingdom and Canada as well as at the three major design, development and production facilities: Los Alamos; Hanford, Washington; and Oak Ridge, Tennessee.

The weapons design and development facility was headquartered at Los Alamos, New Mexico, which was known then as Site Y, later to become the Los Alamos Scientific Laboratory. It was here that 90 eminent scientists (20 of whom were or later became Nobel Laureates)[5] from the United States, the United Kingdom, Germany, Hungary, Italy, and elsewhere worked to develop a workable atomic weapon. The scientific director of the Los Alamos site was the American physicist J. Robert Oppenheimer. The Hanford Site in eastern Washington state was the plutonium production facility and the Oak Ridge, Tennessee site was the uranium enrichment facility.

President Roosevelt died in mid-April 1945 and was succeeded by President Harry S. Truman just a few weeks before the war against Germany and Italy in Europe ended in May 1945.

The Manhattan project culminated with the detonation of the first nuclear weapon, known as the Trinity test, in July 1945 at White Sands, New Mexico. Since the U.S. was still at war with Japan in the Pacific, President Truman decided to use atomic bombs on Japanese cities. The atomic bombs were dropped by air on Hiroshima on August 6, 1945, and on Nagasaki on August 9, 1945. The Japanese surrendered shortly thereafter (August 14, 1945), and the war in the Pacific ended.[4][6] A formal surrender ceremony took place aboard the USS Missouri in Tokyo Bay on September 2, 1945.[7]

As soon as the war ended, many of the scientists returned to their prewar universities. J. Robert Oppenheimer, who had served as the Director of the Los Alamos site for the duration of the Manhattan project and the war, asked physicist Norris Edwin Bradbury to succeed him. Bradbury accepted and, during his 1945–1970 tenure as Director, he became the acknowledged architect of the modern Los Alamos National Laboratory.[8][9]

The atomic bombs that had been developed by the end of 1949 were based on the energy released by nuclear fission reactions or, more simply, the splitting of atoms. Some research had already begun at the Los Alamos site by physicists Hans Bethe and Edward Teller as well as mathematician Stanislaw Ulam on what became known as thermonuclear weapons (also referred to as hydrogen bombs or H-bombs). Thermonuclear weapons are based on the energy released by nuclear fusion reactions or, more simply, the fusion of atoms.

A thermonuclear weapon generates vastly more energy, per unit of weight of the physical weapon, than does a pure fission bomb. In January 1950, faced with the fact that the Soviet Union had successfully detonated an atomic bomb, President Truman announced that the United States was going to develop thermonuclear weapons of all kinds.[10] Almost three years later, on October 31, 1952 (local time), the United States detonated its first full-scale thermonuclear test device, code-named Ivy Mike, on Enewetak Atoll, located in the Marshall Islands of the Pacific Ocean. The test device was based on a design developed by Edward Teller and Stanislaw Ulam and it produced an energy yield of 10.4 megatonnes of TNT equivalent,[note 1] which was equal to the energy yield of 800 atomic bombs such as had been used on Hiroshima.[11] The Ivy Mike thermonuclear device was specifically designed as a test device to validate the concept of creating a nuclear fusion weapon. It weighed about 74 tonnes (82 short tons) and was much too large and unwieldy to be used as a deliverable bomb or weapon.[11]

Two years later, the United States conducted its first test of a deliverable thermonuclear hydrogen bomb. The test was code-named Castle Bravo and it took place on March 1, 1954 (local time) on Bikini Atoll in the Marshall Islands of the Pacific Ocean. The bomb weighed 10.70 tonnes (11.75 short tons) and had an energy yield of 15 megatonnes of TNT equivalent. The Bravo crater in the atoll had a diameter of 1.98 km, with a depth of 76 m. Within one minute, the mushroom cloud had reached 15 km, breaking 30 km two minutes later. Eight minutes after the test the cloud had reached its full dimensions with a diameter of 100 km, a stem 7 km thick, and a cloud bottom rising above 16.5 km. It was the most powerful nuclear weapon ever detonated by the United States.[11][12] LANL played a major role in the design and construction of the thermonuclear test devices and bombs.

The success of the Ivy Mike and Castle Bravo tests inaugurated a new era of developing smaller nuclear weapons having increased destructive power. From the mid-1950s until the early 1970s, the focus was upon miniaturizing the thermonuclear weapons to make them deliverable by aircraft and, later, to fit into long-range missiles.[13]

By the early 1970s, the focus on designing and building new weapons began to wane and the emphasis shifted to the stewardship and upgrading of the weapons already in the stockpile. It became important to make sure that nuclear weapons would only detonate on command and not by accident.[note 2] Many of the underground nuclear tests conducted by the United States in the 1980s and early 1990s were safety tests of stockpiled weapons. With the current ban on nuclear weapon tests, computer simulation and other methods are now used to ensure the safety of the stockpiled weapons.[13]

The University of California has managed the Los Alamos Laboratory for much of the laboratory's history. However, in 2003 the Department of Energy opened the management contract up to other bidders. In June 2006 management of the laboratory was taken over by Los Alamos National Security, LLC, a private company of partners that include the University of California, Bechtel National Corporation, Babcock & Wilcox Company, and URS Corporation.[14]

Los Alamos National Laboratory is managed by Los Alamos National Security, LLC (LANS), which is a private limited liability company formed by the University of California, Bechtel National Corporation, Babcock & Wilcox Company, and URS Corporation. As agreed by the four LANS partners, a Board of Governors is charged with oversight and governance of LANS. The Board includes three individuals appointed by the University of California and three individuals appointed by Bechtel, as well as five independent Governors who are selected for their expertise and experience in fields pertinent to LANL operations. The Board includes an Executive Committee that consists of the six University of California and Bechtel appointees.[15]

The President of LANS reports directly to the Board of Governors and also serves as the Director of Los Alamos National Laboratory.

The day-to-day operations of LANL are led by its Director and a Deputy Director assisted by an Executive Director and an Executive Office Manager.[16] As shown in the organization chart below, five operating divisions, each headed by a Principal Associate Director, report to the Director's office:[17]

In addition, these twelve administrative functions report to the Director's office:[16]

As of May 2011 there were a total of 11,782 personnel in the Los Alamos National Laboratory with the following breakdown:[18]

LANL participates in a number of collaborative programs such as: