This article is about Plutonium. For other uses of the term Pluto, please see Pluto (disambiguation).

Plutonium is a chemical element, typically found as a solid in its elemental form. It has the chemical symbol Pu, atomic number (number of protons) Z = 94, and its longest-lived isotope has a mass number of 244.

Plutonium belongs to the class of elements called transuranic elements whose atomic number is higher than 92, the atomic number of uranium. It is named after the dwarf planet Pluto, since it comes after the chemical element neptunium just as Pluto came after Neptune as a planet in our Solar System before Pluto's reclassification to dwarf planet in 2006.

In nature, plutonium-239 has been detected in trace quantities in uranium ores, but only after it had been prepared in the laboratory by Glen Seaborg, Edwin McMillan, Joseph W. Kennedy, and Arthur C. Wahl in early 1941.[1] All isotopes of the element are radioactive, most of them emit high energy (generally >5 MeV) alpha particles and low energy (<20 keV) gamma and x-rays as they transform into uranium. The isotopes Pu-241 and Pu-243 undergo β− decay transforming into isotopes of americium. Small amounts of Pu-244 exist in nature from remnants of primordial stellar nucleosynthesis. Atmospheric testing of nuclear weapons, which ended in 1980, is the source of most of the plutonium in the environment worldwide. The testing released approximately 10 000 kg of plutonium.

Plutonium is a radiological poison because of its high rate of alpha emission. It may remain in the lungs or move to the bones, liver, or other body organs and is highly carcinogenic.[2]

Plutonium dissolves in acids and can exist in four oxidation states, Pu(III), Pu(IV), Pu(V), and Pu(VI). Very many compounds of plutonium have been prepared, often starting from the dioxide, PuO2.

The very first preparation of plutonium by Seaborg et al. was the 238 isotope. It was produced in the 60 inch cyclotron in Berkeley by colliding the naturally occurring uranium-238 (238U) with 16 MeV deuterons giving neptunium (238Np) and neutrons (

n). The Np-isotope decays to plutonium, while radiating electrons (β−-particles):

The industrial production of the Pu-239 isotope occurs in nuclear reactors in which uranium-238 captures slow neutrons and decays via neptunium:

Capture of neutrons and the two following decays form a slow process. Even after a few days, the Pu-239 isotope is still mixed with considerable quantities of U-238, other components of the original materials, and fission products. When sufficient plutonium has been formed, the mixture is chemically separated and the plutonium can be crystallized out as the (chemically pure) Pu-239 metal. In general, this metal shows considerable contamination with the Pu-240 isotope. 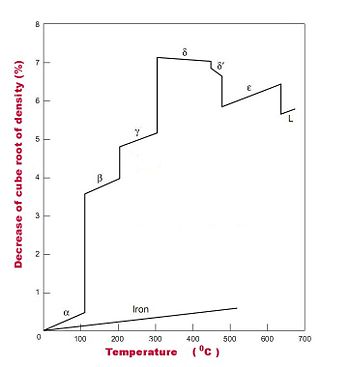 Decrease in cube root of density of Pu-metal as function of temperature; compared with Fe-metal

Plutonium, warm because of energy released in alpha decay, is a silvery metal that oxidizes easily and takes on a yellow tarnish in air. Solid plutonium at normal pressure exhibits six different allotropes (crystal structures), labeled α, β, γ, δ, δ', and ε, see the figure. They exist at increasing temperatures. The allotropes show fairly large volume changes upon phase transitions, their densities ("specific weights") vary from 16.00 g/cm3 to 19.86 g/cm3, see the table. It is remarkable that the density of the δ phase decreases upon temperature increase (see the figure) and that around 430 °C there is a transition to a higher-temperature phase (δ') of lower density and that around 480 °C there is again a phase transition to a crystal structure of even lower density (ε), while the ε phase itself expands normally (cf. the iron curve). Just as water, but unlike many other materials, plutonium becomes denser when it melts (at 639.4 °C, normal pressure). The boiling point is at very high temperature, 3228 °C.

The α crystalline form is the phase stable at room temperatures. It is not a very good conductor of electricity, it has the highest electrical resistivity of any pure metallic element (1.46×10−6 Ω· m).

Metallurgy of plutonium, especially under high pressures creating solid-state phases that would occur during implosion of nuclear weapons, is one of the areas especially sensitive in nonproliferation.[3]

Twenty isotopes of plutonium (228-247Pu) have been identified, the most commonly encountered isotopes being Pu-238 and Pu-239.

The fissionable isotope Pu-239 is used in nuclear weapons. "Weapons grade" has less than 7% Pu-240 and close to 93% Pu-239. Although Pu-240 is predominantly an α-radiator, it shows some spontaneous fission with accompanying emission of neutrons. When Pu-240 is compressed in a fission device, it emits sufficient neutrons to cause a premature chain reaction (nuclear pre-detonation, also known as fizzling), disrupting the core before it can give a full explosive yield.

Plutonium fission devices must use implosion technology, as opposed to the simpler gun-type usable with uranium bombs that do not have the pre-detonation problem. The atomic bomb Fat Man that detonated over Nagasaki on August 9, 1945 had a Pu-239 core, as had the device (Trinity) tested at White Sands, New Mexico a few weeks earlier (on July 16). Because of the fizzling problem there was lower confidence in the plutonium bomb, which is why it was pretested.

The gun-type design is obsolete, as implosion can be used with uranium devices as well, but plutonium offers the advantage of requiring a lighter fissionable mass than uranium—the critical mass of plutonium-239 is only about one-third that of uranium-235. This is advantageous both in requiring less material, but also in reducing the overall weight of warheads, a major concern for missile delivery systems.

Plutonium-238 is used in small lightweight thermoelectric and thermionic devices in which the heat associated with the α decay is harvested. Such devices are installed in unmanned spacecraft.

The isotope Pu-240 is useful as a fuel in nuclear reactors. Nuclear reactors, which operate at a low neutron flux density, are not hindered by the neutrons generated by the spontaneous fission of this isotope. But also in nuclear reactors the application of the Pu-239 isotope is predominant. Approximately one-third of the total energy produced in a typical commercial nuclear power plant comes from the fission of Pu-239 produced from U-235.