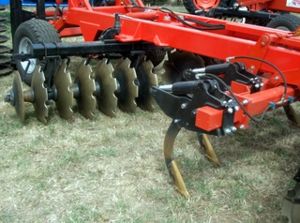 Agriculture (a term which encompasses farming) is the process of producing food, feed, fiber and other goods by the systematic raising of plants and animals.

Agri is from Latin ager ("a field"), and culture is from Latin cultura, meaning "cultivation" in the strict sense of tillage of the soil. A literal reading of the English word yields: tillage of the soil of a field, which in modern use is called agronomy, while the word Agriculture has come to mean all activities essential to food/feed/fiber production, including all techniques for raising and processing livestock no less than those essential to crop farming.

Continual improvement in agricultural methods from prehistory to the present has been the key factor in the extreme specialization of human activity during the historical epoch. Many of these specializations have nothing to do with food production, but when specialists such as scientists, inventors and mechanical and chemical engineers devote their efforts to the improvement of farming methods, resources and implements, they too, along with those who work the fields and pens, are "in agriculture".

42% of the world's population is employed in agriculture, making it by far the most common occupation, yet it accounts for less than 5% of the Gross World Product (an aggregate of all Gross Domestic Products).[1]

"Oh Farmers, Pray That Your Summers Be Wet And Your Winters Clear." - Virgil 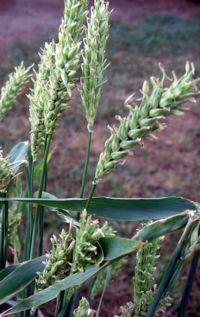 Farming sometimes refers to subsistence agriculture, the production of enough food to meet just the needs of the farmer/agriculturalist and his/her family. It may also refer to commercial agriculture, long prevalent in developed nations and increasingly so elsewhere, which consists of obtaining financial income from the cultivation of land to yield produce, the commercial raising of animals (animal husbandry), or both. 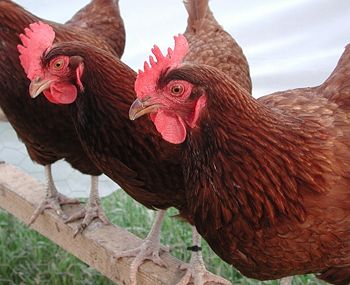 Chickens, such as these Rhode Island Red hens, which provide both eggs and meat, are a common livestock in subsistence farming

Agriculture is also short for the study of the practice of agriculture— more formally known as agricultural science.

In the Western world, crop breeding based on scientific genetics, and most recently the use of gene manipulation, better management of soil nutrients, availability of synthetic fertilizers and improved weed control have greatly increased yields per unit area. At the same time, the use of mechanization has decreased labor requirements. The developing world generally produces lower yields, having less access to the latest technology, and in some cases, as in much of Africa, farmers are faced with high fertilizer costs.

Modern agriculture depends heavily on engineering and technology and on the biological and physical sciences. Irrigation, drainage, conservation, and sanitary engineering, each of which is important in successful farming, are some of the fields requiring the specialized knowledge of agricultural engineers.

Agricultural chemistry deals with other vital farming concerns, such as the application of fertilizer, insecticides (see Pest control), and fungicides, soil makeup, analysis of agricultural products, and nutritional needs of farm animals.Plant breeding and genetics contribute additionally to farm productivity. Advanced seed engineering has allowed strains of seed to be perfected for most farming situations. Seeds can now germinate faster, and with higher percentages of viable seed, and adapt to shorter growing seasons in different climates. Present-day seed can be bred resist certain herbicides with advantages for weed control and soil conservation. Hydroponics, a method of soil-less gardening in which plants are grown in chemical nutrient solutions, may help meet the need for greater food production as the world's population increases.

Mechanization, the outstanding characteristic of late 19th and 20th century agricultural evolution, has eased much of the backbreaking toil of the farmer. More significantly, mechanization has enormously increased farm efficiency and productivity (see Agricultural machinery). Animals, including horses, mules, oxen, camels, llamas, alpacas, and dogs; however, are still used to cultivate fields, harvest crops and transport farm products to markets in many parts of the world.

Airplanes, helicopters, trucks and tractors are used in agriculture for seeding, spraying operations for insect and disease control, Aerial topdressing, transporting perishable products, and fighting forest fires. Radio and television disseminate vital weather reports and other information such as market reports that concern farmers. Computers have become an essential tool for farm management.

According to the National Academy of Engineering in the US, agricultural mechanization is one of the 20 greatest engineering achievements of the 20th century. Early in the century, it took one American farmer to produce food for 2.5 people, where today, due to engineering technology (also, plant breeding and agrichemicals), a single farmer can feed over 130 people [2]. This comes at a cost, however, of large amounts of energy input, from unsustainable, mostly fossil fuel, sources.

Animal husbandry means breeding and raising animals for meat or to harvest animal products (like milk, eggs, honey, or wool) on a continual basis.

In recent years some aspects of industrial intensive agriculture have been the subject of increasing discussion. The widening sphere of influence held by large seed and chemical companies, meat packers and food processors has been a source of concern both within the farming community and for the general public. There has been increased activity of some people against some farming practices, raising chickens for food being one example. Another issue is the type of feed given to some animals that can cause Bovine spongiform encephalopathy in cattle. There has also been concern because of large impacts that intensive agriculture has on the environment. In the US, for example, fertilizer has been running off into the Mississippi for years and has caused a dead spot in the Gulf of Mexico, where the Mississippi empties. Bad intensive agriculture practices can also deplete the fertility of the land over time and the end effect is that which happened in the Middle East, where some of the most fertile farmland in the world was turned into a desert by ancient agricultural practices. But with expanding more wealthy human populations, the efficiencies of intensive farming save land from the plow: without fertilizer use and irrigation, millions of extra farm hectares would have been used to served the needs of population growth since 1960, and new approaches such as no-till agriculture can be deployed to improve soil carbon content, save water, and reduce atmospheric carbon dioxide emissions.

The patent protection given to companies that develop new types of seed using genetic engineering has allowed seed to be licensed to farmers in much the same way that computer software is licensed to users. Some critics argue that his has changed the balance of power in favor of the seed companies, allowing them to dictate terms and conditions previously unheard of, but hybrid corn seed companies evolved a similar arrangement with their clients when hybrid vigor was discovered early in the 20th century, because the farmers obtained economic benefits from commercial seed. Some argue biotechnology-based seed companies companies are guilty of biopiracy[3]. Others point out that excessive precaution in rich countries that result in delayed introduction of beneficial technology to less-developed countries to the detriment of the poor is a form of eco-imperialism [4].

Soil conservation and nutrient management have been important concerns since the 1950s, with the best farmers taking a stewardship role with the land they operate. However, increasing contamination of waterways and wetlands by nutrients like nitrogen and phosphorus are of concern in many countries.

Increasing consumer awareness of agricultural issues has led to the rise of community-supported agriculture, local food movement, Slow Food, and commercial organic farming, though these yet remain fledgling industries.

People rely on plants and animals for sustenance, and paleolithic cave paintings show that meticulously careful observations of prey have been expressed for at least tens of millennia. Human interest in food was not limited to passive considerations since, rather than eaten as found, it was carried from place to place and processed in various ways. In neolithic times, probably somewhere in the fertile Nile delta, more planned interactions with certain plants and their seeds led to the establishment of agriculture in many societies. When the intellectual consideration of what plants are was combined with evidence-based experiments to understand their growth, then botany, the science of plants began.[5]

Agriculture in the Middle Ages

The Middle Ages owe much of its development to the advances made by the Muslims, as Islamic culture flowered while Europe and other Roman and Byzantine administered lands entered an extended period of societal stagnation. In the Arab caliphates , a modern agricultural system became central to economic life and organization as early as the ninth century, development of a sophisticated system of irrigation using machines such as norias (newly invented water raising machines), dams and reservoirs. With such technology, Muslims managed to greatly expand the exploitable land area. The Muslims also introduced new crops into Europe via Spain. These included sugar cane, rice, citrus fruit, apricots, cotton, artichokes, aubergines (eggplant), saffron, lemons, oranges, cotton, almonds, figs and sub-tropical crops such as bananas and sugar cane.

The invention of a three field system of crop rotation during the Middle Ages vastly improved agricultural efficiency.

After 1492 the world's agricultural patterns were shuffled in the widespread exchange of plants and animals known as the Columbian Exchange. Crops and animals that were previously only known in the Old World were now transplanted to the New and vice versa. Perhaps most notably, the tomato became a favorite in European cuisine, with maize and the potato widely grown, while certain wheat strains quickly took to western hemisphere soils and became a dietary staple even for native North, Central and South Americans.

By the early 1800s agricultural practices, particularly careful selection of hardy strains and cultivars, had so improved that yield per land unit was many times that seen in the Middle Ages and before, especially in the largely virgin lands of North and South America. With the rapid rise of mechanization in the 20th century, especially in the form of the tractor, the demanding tasks of sowing, harvesting and threshing could be performed with a speed and on a scale barely imaginable before. Breeding techniques such as artificial hybridization have created better yielding and more stress tolerant crops, and many new options for weed and pest management.

This high productivity per unit area has important positive ecological consequences as agricultural output has expanded to meet the needs of a growing world population. Since around 1960 there has been relatively little expansion of global arable land area, and farming output has largely kept pace with substantial inceased demand for food and feed because of introduction of better crop varieties and larger use of irrigation and fertilizer. This productivity boost has spared millions of hectares of forest and wilderness from conversion to agriculture, and is highly relevant to addressing the extra challeges of global agriculture posed by 21st century demands such as the biofuels ethanol and biodiesel, and manufacturing of polymers from renewable resources.[6] [7].

See main article Agricultural crops which discusses or has links to the following: 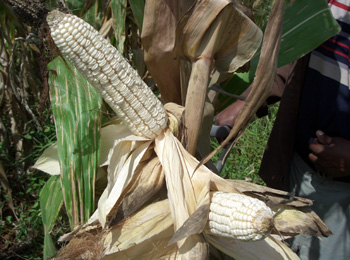 White maize is a staple traditional food (mealies) in much of Southern Africa, but maize has a center of origin near Southern Mexico, Photo Kwa Zulu Natal, 2005

Environmental problems and their management 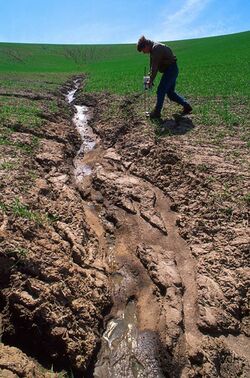 Severe soil erosion in a wheat field near Washington State University, US (c.2005)

Agriculture may often cause environmental problems because it changes natural environments and produces harmful by-products. Some of the negative effects are:

On the other, changes to agricultural practices can have beneficial environmental effects. For instance conservation tillage can be used to mitigate atmospheric emissions of carbon dioxide by preventing carbon loss from farm soils, or even promoting build-up of soil carbon content [8] [9].

Agriculture is cited as a significant adverse impact to biodiversity in many nations' Biodiversity Action Plans, due to reduction of forests and other habitats when new lands are converted to farming. Better farm productivity per unit area of farmland can, as mentioned before, reverse the trend for arable land to encroach on forest and wilderness [10]. Some critics include agriculture as a significant contributor to current global climate change.