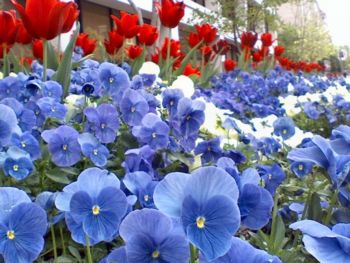 Humans have long used flowers to beautify their living and work spaces.

The overwhelming majority of land plants reproduce by means of flowers. Flowers produce fruit through pollination; pulpy cases for seeds, which contain all the genetic information required to create a new plant. Seeds are formed when pollen is transferred from one flower to another, this can be spread by the wind, or by animals. 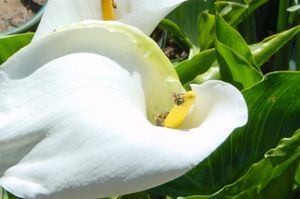 Bees aiding in the pollination of Calla Lillies (Arum Lily).

Many animals, including birds, bats, humans and insects, find flowers attractive. There is a good reason for this: plants have evolved showy flowers that attract animals so that when the animal comes to the flower, pollen attaches to them, and is spread when they visit another flower. Things that attract animals to plants include colour, scent, nectar, pollen, pattern and shape. Plants that do not rely on animals for pollination, such as grasses, typically have small, seemingly insignificant flowers. 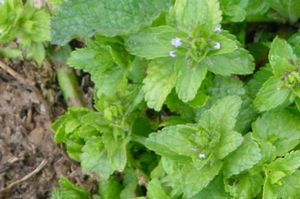 Birds and bees are of particular importance to plant reproduction as they flit from flower to flower gathering nectar and pollen, or eating the flower petals. Birds also eat fruit, which contains seeds, and the seeds are later passed through the bird's digestive system and eventually land on the ground, sometimes many miles away. A percentage of these grow into new plants. Because of the role birds and bees play in plant reproduction, to tell children about "the birds and the bees" has become a euphemism for sex education in the English language.

People generally like the fragrance and form of flowers, and cultivate them in gardens. They are given as gifts in many cultures, and are an important token in courtship rituals. Flowers also serve as expressions of love, sympathy and apology. Several industries and hobbies have grown around the selective breeding, growing and arranging of flowers.

Many flowers are bisexual having both the male stamens and the female carpels in addition to the specialized sepals and petals that surround these sex organs. Such flowers are termed complete or perfect. The carpels usually fuse together to form the gynecium that will protect the seeds and form the fruit if the flower is fertilized.

These four characteristic organ types that form a flower, the sepals, petals, stamens and carpels, were proposed to be modified leaves by Johann Wolfgang von Goethe.[1] His hypothesis was that each organ started as a leaf and underwent a metamorphosis to become the more specialized organ. His thinking has survived the test of time, and recent molecular genetic research confirms the genetic basis for his original idea.[2] 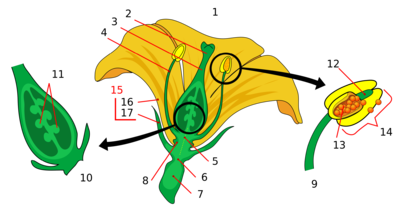