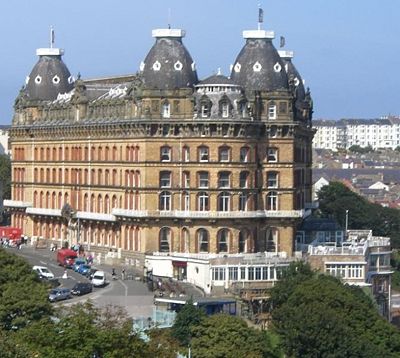 The Grand Hotel, overlooking Scarborough's South Bay, is a well-known nineteenth-century landmark in this English seaside town. Owned by Britannia Hotels,[1] it has undergone a £7 million refurbishment.[2] The hotel was designed by the Hull architect Cuthbert Brodrick,[3] and when completed in 1867,[4] was one of the largest hotels in the world, as well as one of the first giant purpose-built hotels in Europe. The hotel's distinctive yellow brickwork was made locally in Hunmanby, and the building is designed around the theme of time: four towers to represent the seasons, 12 floors for the months of the year, 52 chimneys symbolise the weeks, and originally there were 365 bedrooms, one for each day of the year.

The hotel's heydey was arguably during Victorian times, when wealthy holidaymakers made up the establishment's clientele. As Scarborough was a famous spa town, the building's baths originally included an extra pair of taps, so guests could wash in seawater as well as fresh.[5]

Detail of one of the hotel's four towers.

The hotel was damaged when the German Navy bombarded the town in 1914; with few guests staying at the time, no-one was injured. Two shells hit the Grand Restaurant, shattering the windows and showering the interior with debris. A bedroom on the third floor was completely destroyed by a direct hit; later, a story emerged that a waiter with a reputation for lateness, who had just left the room, thereafter improved his conduct considerably. Minor damage occurred elsewhere. The repair bill totalled about £10,000.[6] 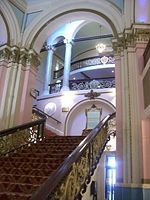 Nowadays, the hotel caters towards the budget end of the spectrum. The hotel was bought by Butlins, the company better-known for its holiday camps, in 1978, and run as an inexpensive choice of accommodation until it was sold to Britannia in 1998. 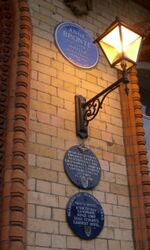 Three blue plaques outside mark where the novelist Anne Brontë died in 1849, the contribution of the RAF trainees stationed at the hotel during World War II, and the original opening of the building.

The Grand Hotel has been in the news several times over the years, often for reasons relating to public health. Several cases of sickness were reported in the mid-1990s under previous ownership, and between 2002 and 2007, the hotel was hit by six further outbreaks.

Following cases of ill-health among guests in the 1990s, in 2002 an outbreak of gastro-enteritis hospitalised one man and affected more than 200 guests and staff. The hotel suffered a further setback a month later, when the hotel was closed for cleaning over ten days after 54 people fell ill.[7]

Unfortunately, the Grand was unable to leave such incidents in the past: in October 2004, a number of guests were quarantined in their rooms due to reports of sickness. Following this, in December, the hotel shut for ten days due to an outbreak of the Norwalk virus. This incident, in which no-one required hospital treatment, closed the establishment for several days. A spokesperson for the North Yorkshire Health Protection Unit blamed the outbreaks on the age of the building and "bad luck".[8] A local report suggested that the airborne infection had spread more easily due to the hotel catering to more elderly guests.[9] By this point, the hotel's health-related issues had attracted interest outside the town; in 2005 a televised BBC investigation revealed further problems, including the presence of e-coli bacteria.[10] This report was branded "sensationalist" by Scarborough's environmental health officer.[11]

The most recent health incidents at the hotel occurred in March and October 2007: that spring, 120 people fell ill with the Norwalk virus, followed by 70 more with the same infection in the autumn. A representative for infection control specialists called in to remove the danger in March stressed that the outbreak should be placed in the context of many such occurrences elsewhere.[12] The October outbreak led to the temporary closure of the hotel to non-residents,[13] and local press noted how on both occasions, the nearby Royal Hotel had put up a notice asking the Grand's guests not to enter their premises.[14]

The hotel has also fallen victim to a number of other unfortunate events. In 2006, it was fined £10,000 after a guest drank tap water that contained dangerous levels of bleach.[15] Also that year, a fire broke out on the sixth floor of the building, possibly caused by renovation work. The hotel was quickly evacuated while local fire crews dealt with what they described as "quite a severe fire". Extinguishing the blaze took over 40 minutes, due to the number of stairs in the building and the amount of smoke, which both hampered firefighters' movements.[16] Less seriously, the hotel was in the local press that September over local seagulls' mating antics disturbing guests; the management installed extra netting and spikes on the exterior of the building to deter the nesting birds. Their droppings were also responsible for a significant proportion of the hotel's cleaning expenses.[17]