Bombardment of Scarborough, Whitby and Hartlepool

From Citizendium
(Redirected from Bombing of Scarborough, Hartlepool and Whitby)
Jump to navigation Jump to search

The bombardment of Scarborough, Whitby and Hartlepool was a World War I attack by the German Navy on English seaports on the morning of 16th December 1914. The assault on the east coast brought about hundreds of casualties and led to a British propaganda campaign, Remember Scarborough, that was used on army recruitment posters.

The bombardment commenced at about 8 a.m., carried out by a fleet of German warships led by Admiral Franz von Hipper. Over a period of around 90 minutes, the fleet unleashed 1,150 shells onto military targets and civilian areas. 137 people were killed and 592 wounded.[1] Scarborough had no gun batteries to defend itself from the three battleships Derfflinger, Von der Tann and Kolberg. 17 people died and about 80 were injured in the bombardment, with about 500 shells fired. The fleet moved on to Whitby, another defenceless town, and like Scarborough mainly known for tourism and the fishing industry. However, defence batteries at Hartlepool responded to the attack, scoring light damage on three ships - Moltke, Seydlitz and Blücher - though at the conclusion the fleet moved away without loss.[2] 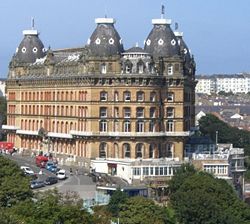 CC Image
The Grand Hotel at Scarborough was damaged in the 1914 bombardment.

The attack had caused extensive devastation in some areas. At Scarborough, the town's lighthouse received a shell clean through its tower. The Grand Hotel suffered damage but no guests were injured. There were also 'miracle' escapes among the townsfolk; one story recalls how a milkman's horse was killed by a shell that left both milkman and milk unscathed.