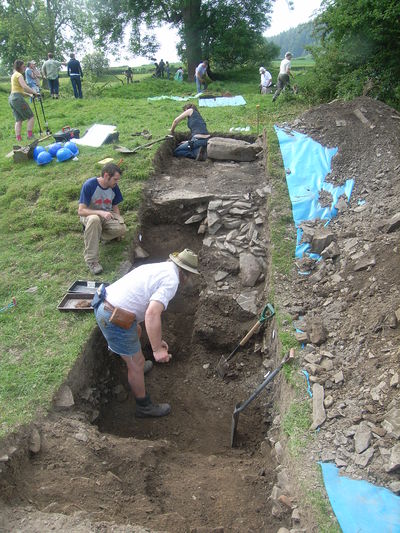 Excavation is one of the processes by which archeologists, paleoanthropologists and paleontologists uncovers the past.

In the words of archaeologist Philip Barker, "The principle of all excavations, large or small, is to remove the superimposed contexts one by one in the reverse order from that in which they were deposited, recording each in as much detail as is necessary to reconstruct, in theory at least, the site context by context, complete with its features and finds, long after the actual process of excavation has destroyed it."[1]

The principle of stratigraphy is that when one layers lies on top of another the one of top must have been deposited later. On an archaeological site, these layers (or contexts) can be removed one by one in reverse of the order they were laid down.[2] Each context represents a stage of activity. There are exceptions to this principle, where animals burrows upset the stratigraphy, or erosion causing layers to be deposited elsewhere, but in general it offers a form of relative dating. The vertical side of a trench shows the order of the layers with their different compositions and thickness. The importance of stratigraphy is that where the stratigraphic sequence of a site survives it is possible reconstruct a chronology of events. The order of the contexts does not necessarily provide a date, however the artefacts discovered within them may be used to date that particular layer and any other finds within it.[3]

Before the first spade enters the ground, numerous methods are available to archaeologists to focus efforts and ensure that as much information on a site is collected to inform excavations. Documentary sources and historical depictions may record details of the site. Aerial photographs are a valuable resource, and can highlight features which are not immediately obvious from the ground. Where appropriate, usually on ploughed farmland, fieldwalking can indicate concentrations of finds which may suggest activity on in a particular area of a site. Geophysics allows the properties of the soil to be measures – for example for resistivity – and can show where buildings once stood and whether buried foundations still remain.[4]

Extracting information from a site

The most common tool of excavation is the trowel, though other tools such as brushes, picks, mattocks, and even mechanical diggers can be used.[5] There is considerable debate over how excavations should be conducted. One school of thought is that excavations may serve to answer particular research questions, for example examining activity on a site during a particular period. However, this may lead to other contexts being ignored as being tangential. As excavation is destructive, to avoid the accidental loss of information Barker suggests that the best question to ask of a site is therefore “what is the whole sequence of events on this site”.[6]

The ideal excavation would examine a site in its entirety to ensure as much information is recorded as possible. There are conditions which prevent total excavation, not least of which are time and money. Excavations at Wharram Percy, a deserted medieval village in Yorkshire, have take place over thirty years, three weeks per year. Despite this long term investment of resources less than 5% of the village has been excavated.[7] In contrast at Pompeii only a fraction as the Roman city is still buried, but it is an exceptional case and has taken centuries to reach that stage.[8]   There are two main types of excavation: open excavations which cover a large area, and trenching which is more restricted. The principle of removing one layer at a time applies to both types. The vertical sides of a trench show the relation between different layers.[7]

One problem, however, that is still encountered is the creation of deep, dangerous holes that run the risk of collapse. An excavator that proceeds without regard to this can run the risk of having their efforts covered by collapse or worse, someone might be injured or killed. Such a major collapse has occurred as recently as the late 1990s at the Sterkfontein site in South Africa, and it took years of effort to clear the rubble. One way to prevent such a disaster is to create step trenches. Step trenches are, as their name implies, cut like a staircase so as to prevent steep sides from being created. Unfortunately, not all sites allow proper step trenching because of the nature of the topography or the presence of walls or large roof blocks. Whatever the methods of excavation used, it is critical that as much evidence of the work is recorded, because the context is destroyed once the material is removed from the site.

In a subject such as chemistry experiments should be repeatable so the results can be reproduced and verified. No two archaeological sites are identical and even within a single site two areas may not give the same results when excavated. Moreover, once a particular area has been excavated re-excavation will not produce the same results. Removing layers of soil and the finds within the contexts removes their relationship, and refilling an excavated area would not restore it to its untouched state. Because of this archaeology if often described as a destructive activity. So that information such as the relationships between layers and where artefacts were recovered is not lost excavators meticulously record their work. The resulting record can then be used in the future to reconstruct the site.[9]

There are two types of record: the visual record, which includes photographs and diagrams, and the written record which is a description of what was found. Video cameras are also of tremendous assistance for documenting the progress of excavations for future researchers.

Once an artefact or bone has been recovered its provenance must be recorded immediately. The specimen must be given an independent field number and its 3-D coordinates entered into a field book or directly into a computer or both. Modern theodolites allow for the internal recording of coordinates that may be downloaded at a later date. The recovered artefacts or bone should be placed in a suitable receptacle and either marked there and then or placed with an identifying field tag.

When excavating in hard sediments such as breccia or stone, the individual plotting of bone may be more difficult as drills are often necessary to remove either whole blocks or individual finds. When removing a large area of breccia, it is best to first plot many different 3-D coordinates on the surface of the rock. In areas like South African hominin-bearing caves it has been found it effective to use a black permanent marker to write the coordinates directly onto the rock surface after plotting them with the theodolite. If one is still using a grid-based method, then plumb down from the grid and mark these coordinates directly onto the rock. Generally, larger drills are used to put holes around the area to be moved and “feathers and wedges” are used to pry the rock loose. Removal of breccia and fossils by this method can be extremely dangerous for both the excavator and the fossils themselves, so initial work with large drills and feathers and wedges should only be done under supervision of an experienced technician or scientist. Once the block is removed however, the coordinates mapped on its surface can be used to plot any individual finds within the matrix.

A more delicate but also more time consuming method of extracting fossils from hard sediments in the field is through the use of an air or electrically driven fine drill that is much like an engraving tool. This method works best for the area directly around the fossil and thus should only be undertaken by an expert and under magnification.

It is preferable to do any fine work around a fossil in the laboratory rather than in the field. In many situations where fossils are artefacts are found in hard sediments, the consolidating matrix is held together by lime or Calcium carbonate. For the removal of limestone, most scientists feel that acid preparation is usually preferable to manual preparation by fine needle drill as this does less damage to the surface of the bone. Acid preparation is conducted by a series of baths of the fossil in weak (acetic) acid (generally around 5% although this may vary based on calcium carbonate content). Preservatives such as Paraloid, a complex polymer, are used to protect exposed bone. Ideally, the acid removes the calcium carbonate but leaves the protected fossil bone intact. The fossil is bathed in clean water or buffered water for long periods between acid baths to prevent the build-up of acid crystals. Great care should be taken when conducting acid preparation as damage can easily be done to the bone surface or to bones that are not yet visible, but reachable through cracks and holes in the rock.

Below is a modified guideline, or protocol, for the stages of an excavation that is used at several major institutions worldwide.[10][11] This is only a work protocol and must be adapted to the excavators specific situation but it does give the excavator a good guideline for a step by step procedure in the field:

Under several countries laws, the keeping of field notes is mandatory and these should eventually be permanently kept in the host institution or in a permanent place of safety.