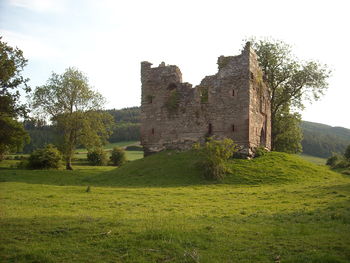 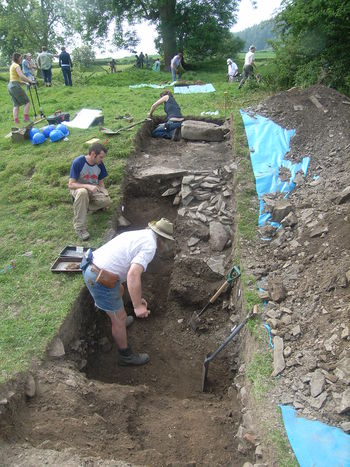 Hopton Castle is a medieval ruin in Shropshire. It is was probably founded in the 11th or 12th century. The castle's history is poorly documented until the 17th century when it was besieged during the English Civil War. The Royalist besiegers captured Hopton Castle from the Parliamentarian defenders and executed the garrison and damaged the castle. The castle was fell into ruin, and only a 14th-century tower is left standing. The site is owned by Hopton Castle Preservation Trust.

The castle is first mentioned in 1264, but it may have been founded as early as the 11th century. There are many castles near England's border with Wales, and taken in this context it is likely Hopton Castle was founded before the mid-12th century. The owner of the surrounding area would probably have been responsible for building the castle, though as it is uncertain when Hopton Castle was first built it is equally clear who was responsible. In 1086 a man named Picot de Say controlled the area, but by the middle of the 12th century it was owned by the de Hopton family. It remained with the family until the 15th century. The estate then passed the Corbet family and then the Wallop family, both times through marriage. It remained in possession of the Wallops until the 17th century.[1]

At the outbreak of the English Civil War in 1642, Robert Wallop was a Member of Parliament and supported the Parliamentarian cause against King Charles I and his supporters. As Shropshire was mostly Royalist territory, Wallop anticipated the castle would be attacked. In February 1644 Samuel More garrisoned the castle for Parliament, and later that same month Sir Michael Woodhouse commanding the king's men laid siege to the castle. More kept a diary which is the main source for the events of the siege. On 26 February Woodhouse's men assaulted the castle, using ladders to climb over the walls. After losing three men the Royalists were repulsed. Woodhouse then asked the garrison to surrender, a request which was summarily refused. Woodhouse and temporarily and more soldiers joined the garrison so the defenders numbered 31.

When Woodhouse returned, he led a force of 200 soldiers and again asked for the castle to be handed over. His demand was refused and in response he mounted an assault which was again ultimately unsuccessfully. The Royalists again withdrew and returned with artillery. Before attacking, the Royalists asked a third time for the garrison to surrender. After this proposal was declined the Royalists attacked. This time a hole was battered in the outer walls, and fire broke out. The garrison retreated to the stone tower which still stands today. With defeat imminent, Hopton's defenders surrendered. The remaining members of the garrison were executed aside from More. It was not uncommon once a garrison to be put to death if they had turned down the chance to avoid bloodshed. After the fighting was done the castle was deliberately damaged, an act known as slighting.[2] The tower's porch has reddened stone which may indicate fire damage, and according to local legend this took place during the siege.[3]

In 1655 Bartholomew Beale bought the castle from Robert Wallop. Ownership descended through his family.[2] Repairs were carried out in the 1950s and 1960s, though the ruins remained in poor condition. The early 21st century saw an increase in the amount of archaeological fieldwork at the castle, with a geophysical survey in 2005, an earthwork survey in 2006, and excavations by Time Team in 2009.[4][5] The Hopton Castle Preservation Trust was formed in 2006, and two years later they took over ownership of the castle. In 2009 the Trust began a programme of restoration which cost £1 million and was completed in 2011. Hopton Castle is both a Grade I listed building and a scheduled monument and is included in English Heritage's 'Heritage at Risk Register'; a sixth of the scheduled monuments in the West Midlands are considered "at risk", and Hopton Castle's state is "very bad".[6][7]

The remains of Hopton Castle are dominated by a 14th-century stone tower on a 2m-high mound. Two enclosures known as baileys were part of the castle, however only earthworks now survive.[8] The three-storey tower was built in the late 13th or early 14th century in the style of an 11th- or 12th-century Norman great tower called a keep. It survives to a height of 12.2m and is roughly rectangular in plan, measuring 12.2m by 14.1m at its base excluding a projecting tower in the south-west corner. The first floor was probably used as a hall, while the second floor likely provided high-status accommodation.[9] The basement provided storage.