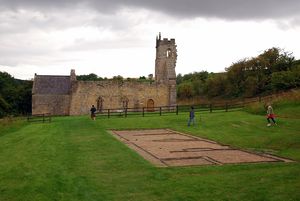 (CC [1]) Photo: Paul Thomas
While the medieval village of Wharram Percy was abandoned, its church (pictured) remained in use until the mid 20th century.

During the late medieval period many villages in England were abandoned or shrank, becoming what are now termed deserted medieval villages (referred to as DMVs henceforth). Despite the name, many settlements were abandoned in the post-medieval period, while at others the extent of settled area diminished though may not have been entirely deserted.

Patterns of medieval settlement were of little interest to historians before the 1940s. In the 1950s, historians W. G. Hoskins and Maurice Beresford were the first people to investigate the phenomenon of DMVs in England. Archaeological excavations at Wharram Percy in Yorkshire, overseen by Beresford and John Hurst were amongst the first thorough investigations of a DMV. The identification of deserted settlements remaining as earthworks prompted their investigation, and in 1952 the Deserted Medieval Village Research Group (DMVRG) was founded. The organisation began compiling details of the DMVs in England. While the initial focus of study was on DMVs, it expanded to encompass other types of settlement, and those medieval villages which are still inhabited. As the study of settlements expanded, so did the remit of the DMVRG which was renamed to the Medieval Settlement Research Group.[1][2][3]

There are an estimated 3,000 DMVs in England, and a further 30,000 abandoned hamlets and farms.[4] The majority of DMVs are found in the Midlands. Early study of deserted settlements focussed on the reasons for desertion, and sought to find out when they were abandoned. At this time the most common explanation was the blame the Black Death in 1348 and 1349. Historiography has changed since then, and now a wider range of factors are considered to have influenced settlement pattern., such as economic and social issues [5][6] In upland villages in particular, population pressure (or lack of it) and climate change might make a vital difference to the economic viability of a settlement.[7][8]