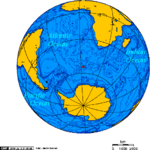 Bouveteya (Bouvet Island) is a 49 square kilometre Island located at 54°26′S 3°24′E﻿ -- halfway between Africa and Antarctica.[1] The Island is uninhabited. Most of the Island is covered by ice, year-round.

It was claimed by Norway in 1929, and is considered a Norwegian dependency.[1]

The movie Aliens v. Predator is set on Bouveteya.