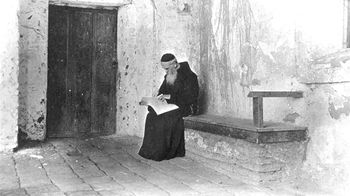 Father Zephyrin (Charles Anthony) Engelhardt, O.F.M., (1851-1934) was a German-born Roman Catholic priest and clerical historian of the Franciscan Order. Reverend Engelhardt, known as the "Father of Mission History," compiled extensive histories of the twenty-one Spanish missions in Alta California as well as other Franciscan settlements in Baja California and Arizona during the opening decades of the 20th century. Fray Engelhardt's work is today considered to be the standard authority regarding California mission history.

His many works include:

Reverend Engelhardt also worked with the Pomo Native Americans of Northern California and compiled the vocabulary of their language.

The plays could be made most touching and instructive at the same time, without connecting the Fathers in an unholy way with everlasting, silly femininity, as some would-be poets have done with no foundation in fact, but merely as a manifestation of their own unclean dreams, Godspeed to your work in that line.

—Father Engelhardt to John S. McGroarty regarding McGroarty's then upcoming three-part work The Mission Play, which premiered in April of 1912 (1910).[1]