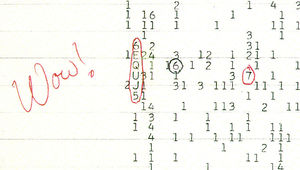 The Wow! signal was a strong narrowband radio signal detected by Jerry R. Ehman on August 15, 1977, while working on a SETI project at the Big Ear radio telescope of The Ohio State University then located at Ohio Wesleyan University's Perkins Observatory, Delaware, Ohio.[1] The signal bore expected hallmarks of potential non-terrestrial and non-Solar System origin. It lasted for the full 72-second duration that Big Ear observed it, but has not been detected again. The signal has been the subject of significant media attention.

Amazed at how closely the signal matched the expected signature of an interstellar signal in the antenna used, Ehman circled the signal on the computer printout and wrote the comment "Wow!" on its side. This comment became the name of the signal.[1]

Interpretation of the paper chart

The circled alphanumeric code 6EQUJ5 describes the intensity variation of the signal. A space denotes an intensity between 0 and 1, the numbers 1 to 9 denote the correspondingly numbered intensities (from 1.000 to 10.000), and intensities of 10.0 and above are denoted by a letter ('A' corresponds to intensities between 10.0 and 11.0, 'B' to 11.0 to 12.0, etc.). The value 'U' (an intensity between 30.0 and 31.0) was the highest detected by the radio telescope; on a linear scale it was over 30 times louder than normal deep space.[1] The intensity in this case is the unitless signal-to-noise ratio, where noise was averaged for that band over the previous few minutes.[2]

Two different values for its frequency have been given: 1420.356 MHz (J. D. Kraus) and 1420.4556 MHz (J. R. Ehman). The frequency 1420 MHz is significant for SETI searchers because, it is reasoned, hydrogen is the most common element in the universe, and hydrogen resonates at about 1420 MHz, thus extraterrestrials might use that frequency on which to transmit a strong signal.[1] The frequency of the Wow! signal matches very closely with the hydrogen line, which is at 1420.40575177 MHz. The two different values given for the frequency of the Wow! signal (1420.356 MHz and 1420.4556 MHz) are the same distance apart from the hydrogen line—the first being about 0.0498 MHz less than the hydrogen line, and the second being about 0.0498 MHz more than the hydrogen line. The bandwidth of the signal is less than 10 kHz (each column on the printout corresponds to a 10 kHz-wide channel; the signal is only present in one column).

The location of the signal in the constellation Sagittarius, near the Chi Sagittarii star group. Because of the design of the experiment, the location may lie in either one of the two red bands, and there is also significant uncertainty in the declination (vertical axis). For clarity, the widths of the red bands are not drawn to scale; they should actually be narrower.]] The original print-out of the Wow! signal, complete with Jerry Ehman's famous exclamation, is preserved by the Ohio Historical Society.[3]

Location of the signal

Determining a precise location in the sky was complicated by the fact that the Big Ear telescope used two feed horns to search for signals, each pointing to a slightly different direction in the sky following Earth's rotation; the Wow! signal was detected in one of the horns but not in the other, although the data was processed in such a way that it is impossible to determine in which of the two horns the signal entered. There are, therefore, two possible right ascension values:

The Big Ear telescope was fixed and used the rotation of the Earth to scan the sky. At the speed of the Earth's rotation, and given the width of the Big Ear's observation "window", the Big Ear could observe any given point for just 72 seconds. A continuous extraterrestrial signal, therefore, would be expected to register for exactly 72 seconds, and the recorded intensity of that signal would show a gradual peaking for the first 36 seconds—until the signal reached the center of Big Ear's observation "window"— and then a gradual decrease.

Therefore, both the length of the Wow! signal, 72 seconds, and the shape of the intensity graph may correspond to a possible extraterrestrial origin.[5]

Searches for recurrence of the signal

The signal was expected to appear three minutes apart in each of the horns, but this did not happen.[5] Ehman unsuccessfully looked for recurrences of the signal using Big Ear in the months after the detection.[6]

In 1995 and 1996, Gray also searched for the signal using the Very Large Array, which is significantly more sensitive than Big Ear.[6][7]

Gray and Simon Ellingsen later searched for recurrences of the event in 1999 using the 26m radio telescope at the University of Tasmania's Mount Pleasant Radio Observatory.[8] Six 14-hour observations were made at positions in the vicinity, but did not detect anything similar to the Wow! signal.[5][7]

Speculation on the signal's origin

Interstellar scintillation of a weaker continuous signal—similar, in effect, to atmospheric twinkling—could be a possible explanation, although this still would not exclude the possibility of the signal being artificial in its nature. However, even by using the significantly more sensitive Very Large Array, such a signal could not be detected, and the probability that a signal below the Very Large Array level could be detected by the Big Ear radio telescope due to interstellar scintillation is low.[6] Other speculations include a rotating lighthouse-like source, a signal sweeping in frequency, or a one-time burst.[4]

Ehman has stated his doubts that the signal is of intelligent extraterrestrial origin: "We should have seen it again when we looked for it 50 times. Something suggests it was an Earth-sourced signal that simply got reflected off a piece of space debris."[9]

He later recanted his skepticism somewhat, after further research showed an Earth-borne signal to be very unlikely, due to the requirements of a space-borne reflector being bound to certain unrealistic requirements to sufficiently explain the nature of the signal.[10] Also, the 1420 MHz signal is problematic in itself in that it is "protected spectrum": it is bandwidth in which terrestrial transmitters are forbidden to transmit due to it being reserved for astronomical purposes.[11][12] In his most recent writings, Ehman resists "drawing vast conclusions from half-vast data"—acknowledging the possibility that the source may have been military in nature or otherwise may have been a production of Earth-bound humans.