Space debris, also called orbital debris, space junk and space waste are man-made objects in orbit around the Earth and that no longer serve any useful purpose. They include defunct satellites, spent rocket stages, rocket slag, coolant droplets, paint flakes, and other objects.[1] Space debris is a risk to both manned and unmanned spaceflight. Because objects in orbit travel at very high velocities, they release large amounts of energy in a collision. Large debris can severely damage or destroy a satellite or other spacecraft on impact.

History and creation of space debris 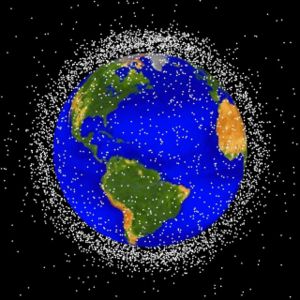 The history of space debris very closely follows the history of spaceflight. The oldest piece of debris still in orbit is Vanguard 1, which was launched in 1958. The satellite functioned from March through June of that year before ceasing useful operation, but it is likely to remain in orbit for 200 more years before finally re-entering the atmosphere. Since its launch hundreds of additional artificial satellites have been launched into orbit, and many remain even after their useful lifetime has ended.

Defunct satellites aren't the only pieces of debris in orbit, however. Spacecraft from Earth are launched on multiple-stage rockets, and the upper stages of these rockets usually separate from the payload after having already achieved low Earth orbit. Vehicles also commonly produce other debris during the deployment phase, including the release of explosive bolts and other components only needed during the launch phase. All of these can remain in orbit, contributing to the debris population.

One of the biggest source of dangerous space debris is explosions. Upper stages of rockets typically contain leftover fuel, and electric shorts or impacts can cause these to explode, creating more debris fragments.

Manned spaceflight is a source of some unique pieces of debris. Astronauts sometimes lose objects during spacewalks, and these have included a glove lost by astronaut Ed White on the first American space-walk, a camera Michael Collins lost near the spacecraft Gemini 10, a wrench and a toothbrush.[2] Sunita Williams of STS-116 also lost a camera during an EVA. Cosmonauts on Russian space stations even disposed of their garbage by ejecting it into space before the problems posed by space debris were realized. Most of those unusual objects re-entered the atmosphere of the Earth within weeks due to the orbits where they were released and their small sizes, so these sort of objects are not major contributors to the space debris environment. 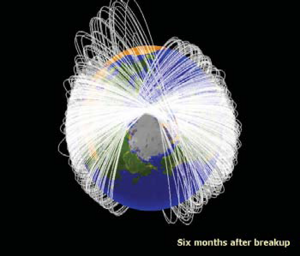 Another unique source of debris was Project West Ford, a series of two tests carried out by Massachusetts Institute of Technology's Lincoln Laboratory on behalf of the United States military. They sought to create a ring of copper dipole antennas (2cm long needles) in orbit which would allow global radio communication. After a failed first attempt in 1961 (the needles did not disperse), the project was eventually successful with the 1963 launch, when the ring carried terrestrial radio transmissions. The needles occupied orbits between 3500 and 3800 km high at 96 and 87 degree inclinations and contributed to Earth's orbital debris.[3] However, the technology was ultimately shelved, partially due to the development of the modern communications satellite and partially due to protests from concerned scientists.[4] As of 2006 several clumps of the needles are still in orbit[5][6], and occasionally reentering.[7]

The largest space debris creation incident was the Chinese anti-satellite weapon test on January 11, 2007.[8] The event created more than 2200 pieces of trackable debris, including 1900 that have been incorporated into the official Space Surveillance Network catalog.[9] There are likely over 35,000 pieces at least 1 cm in diameter. These debris are located in orbits between 200 km and 4000 km in altitude, and will likely remain in space for many years.[10] In June, 2007, NASA's Terra environmental spacecraft was the first to be moved in order to prevent impacts from these debris.[11]

Space debris pose a significant problem to both manned and unmanned spacecraft. Objects in orbit around earth travel at very high speeds, and typically collide at relative velocities around 10 kilometers per second. At these speeds even small objects impact with great energy.

Objects of different sizes set up different challenges for mission planners. Large objects, about 10 cm or larger in diameter, have the greatest potential to cause damage to spacecraft, but are also big enough to be easily tracked and are therefore easier to avoid. Very small objects, less than 1 cm in size, cause the least damage individually, but are also by far the most common particles, as they are virtually omnipresent in low-Earth orbits. The biggest danger they present is in causing erosive damage, somewhat like a sandblaster.

At least three orbital collisions have occurred involving large pieces of debris. In December 1991 the Russian satellite Cosmos 1934 collided with a piece of debris from another Russian craft, Cosmos 926. At least two new large pieces of debris broke off of Cosmos 1934. Later, in January 1996 the French satellite CERISE collided with a fragment of an Ariane 1 rocket that had exploded ten years earlier,[12] severing the satellite's stabilization boom.[13] Finally, in 2004 a fragment of a Chinese CZ-4 launch vehicle impacted a 31 year old U.S. rocket body, producing three more pieces of identifiable debris.[12]

These in-space collisions are particularly worrying in light of the Kessler Syndrome theory. This is a scenario, proposed by NASA consultant Donald J. Kessler, in which the quantity of space debris in orbit is so high that it prevents economic spaceflight in or through low-Earth orbit. Although the current debris field isn't nearly so dense, scientists speculate that a large explosion could trigger an ablation cascade in which large debris continually collide with more large satellites, creating even more debris.[14]

Occasionally space debris can even survive atmospheric reentry and impact the surface. On at least two separate occasions the second stage of a Delta II rocket has broken up and scattered debris on land. The first occurred on January 22, 1997 when a 264 kg stainless steel fuel tank impacted near Georgetown, Texas. It landed a mere 45 meters from a house and 135 meters from a major highway. A titanium pressure sphere from the same rocket landed near Seguin, Texas.[15] On the same day Lottie Williams noticed a light in the sky that she said looked like a meteor while talking a walk in a park in Tulsa, Oklahoma. Minutes later she was struck in the shoulder by a piece of charred metal,[16] likely from the same Delta rocket. She was not injured.[15]. More recently, on April 27, 2000 another Delta II broke up in the atmosphere. It scattered three large components in South Africa, about 20 km from Cape Town and a nuclear power station.[17] 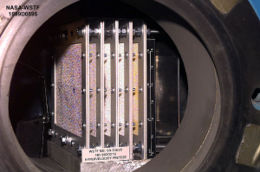 In order to mitigate the generation of additional space debris, a number of measures have been proposed.

Launch vehicles have traditionally carried extra propellant to ensure the payload reaches its destination. However, this practice often leaves upper stages in orbit partially filled with rocket fuel. Sparks from electrical components or impacts from other debris or micrometeroids can ignite this fuel and cause an explosion, fragmenting the stage and creating more debris.[18] To mitigate these risks, some launch vehicles attempt to deplete any residual fuel after launch. Delta rockets now execute a depletion burn after payload deployment.[19] Other rockets, such as Ariane and the H-1 are passivated by venting unused fuel into space.[18]

Taking satellites out of orbit at the end of their operational life would also be an effective mitigation measure. This could be facilitated with a "terminator tether," an electrodynamic tether that is rolled out, and slows down the spacecraft.[20] In cases when a direct (and controlled) de-orbit would require too much fuel the satellite can also be brought to an orbit where atmospheric drag would cause it to de-orbit after some years. Such a maneuver was successfully performed with the French Spot-1 satellite at the end of 2003. It will re-enter in around 2020.[21] And in orbital altitudes where it would not be economically feasible to de-orbit a satellite, such as in the geostationary ring, satellites can be boosted to a graveyard orbit where no operational satellites are present.

Proposals have been made for ways to clean up debris already in orbit, but no technology currently exists that would make this economically viable. The most promising technique appears to be the laser broom, a multimegawatt land-based laser that could be used to target fragments. When the laser light hits a fragment, one side of the fragment would ablate, creating a thrust that would change the eccentricity of the remains of the fragment until it would re-enter harmlessly.[22]

However, most efforts are currently focused on preventing the creation of new debris, and better protecting against the debris that are already in orbit. Some spacecraft, like the International Space Station, have been outfitted with armor to provide limited protection against debris impacts.[23]

Because the most useful satellite orbits are in low-earth orbit and geostationary orbit these regions of space have the greatest concentration of debris.

The U.S. Strategic Command maintains a catalog containing about 10,000 orbital objects in order to avoid false-positives when scanning for missiles. Observation data gathered by a number of ground based radar facilities and telescopes as well as by a space based telescope[24] are used to maintain this catalog. Nevertheless, the vast majority of debris remain unobserved. There are more than 600,000 objects larger than 1 cm in orbit (according to the ESA Meteoroid and Space Debris Terrestrial Environment Reference, the MASTER-2005 model). 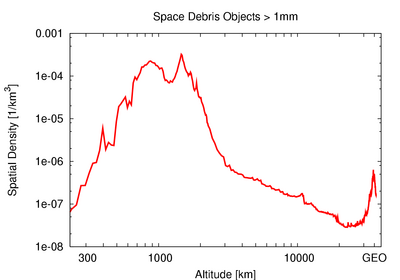 Other sources of knowledge on the actual space debris environment include measurement campaigns by the ESA Space Debris Telescope, TIRA[25], Goldstone radar, Haystack radar,[26] and the Cobra Dane phased array radar.[27] The data gathered during these campaigns is used to validate models of the debris environment like ESA-MASTER. Such models are the only means of assessing the impact risk caused by space debris as only larger objects can be regularly tracked.

Returned space debris hardware is also a valuable source of information on the sub-millimeter space debris environment. The Long Duration Exposure Facility deployed by STS-41-C Challenger and retrieved by STS-32 Columbia spent 68 months in orbit. The close examination of its surfaces allowed the analysis of the directional distribution and the composition of debris flux. The EURECA satellite deployed by STS-46 Atlantis in 1992 and retrieved by STS-57 Endeavour in 1993 could provide additional insight.

The solar arrays of the Hubble Space Telescope returned during missions STS-61 Endeavour and STS-109 Columbia are an important source of information on the debris environment. The impact craters found on the surface were counted and classified by ESA to provide another means for validating debris environment models.