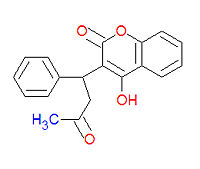 Originally designed to be a rat poison, warfarin works as an anticoagulant by suppressing the enzyme epoxide reductase in the liver, thereby suppressing the formation of the reduced form of vitamin K epoxide, which is needed for the synthesis of many coagulation factors. As a drug, it is often sold as the sodium salt of warfarin.

The dangers of feeding livestock spoiled sweet clover hay were known in the 1920’s[1] and scientists at the University of Wisconsin-Madison were spearheading the problem on multiple fronts. R.A. Brink and W.K. Smith were attempting to breed a new variety of clover that was free of the toxic effect and Karl Paul Link's laboratory was attempting to isolate the killer compound. Farmers were already hurting due to the Great Depression and despite knowing they should not feed their livestock such hay, they could not afford to buy uncontaminated supplies. This disease that was affecting many livestock throughout the US became known as "sweet clover disease".[2]

The urgency of this work was punctuated in the winter of 1933 when Ed Carlson, a farmer from Deer Park, Wisconsin, came to Madison for help carrying a milk can of uncoagulated blood, a dead cow in his truck and a sample of the hay contaminated with the spoiled sweet clover. This spurred Link on and in 1940 he finally published the source of the hemorrhagic factor in sweet clover, 3,3'-methylene-bis[4-hyfroxycoumarin], known as coumarin.[3] The following year Link published the discovery of dicumarol, the oxidised form of coumarin that was present in the spoiled sweet clover; this became widely used as an oral anticoagulants for medical treatment.[4][5]

Given the death of cattle from hemorrhaging, Link began to realise that anticoagulants had potential to be rodenticides.

I had an intuitive feeling that this might be a good thing. A pretty bad thing for rats, but a good thing for humans. But the idea didn't come overnight. It came into my head and the heads of everyone in the lab over a period of years. [6]

Dicumarol turned out to be a poor rodenticide as it acted too slowly[7] but by 1948 Link had patented another coumarin derivative as a rodenticide. Research for both dicumarol and the new rodenticide was funded by the Wisconsin Alumni Research Foundation (WARF) and the brand name for these anticoagulating rat posions was coined 'Warfarin' after WARF. Later, the rodenticide was promoted for clinical applications under the brand name 'Coumadin'.

Warfarin therapy reduces the vitamin K dependent cofactors II, VII, IX, and X and the vitamin K dependent Protein C. The level of factor II is thought to most influence coagulation.[8][9] The levels of factor VII and Protein C fall the fastest after warfarin is started.[9] With the exception of Factor IX, these factors are from either the extrinsic pathway or the final common pathway.

Genetic polymorphisms in the vitamin K epoxide reductase complex 1 (VKORC1) gene explain 30% of the dose variation between patients[16]: particular mutations make VKORC1 less susceptible to suppression by warfarin[17] There are a main haplotypes that explain 25% of variation: low-dose haplotype group (A) and a high-dose haplotype group (B).[18] For the three combinations of the haplotypes, the mean daily maintenance dose of warfarin was:

CYP2C9 is an isoenzyme of cytochrome P-450. Polymorphisms of CYP2C9 explain another 10% of variation in warfarin dosing[16], mainly among Caucasian patients as these variants are rare in African American and most Asian populations.[19] A meta-analysis of mainly Caucasian patients found[19]:

"After 4 to 5 days of concomitant warfarin and heparin therapy, heparin is discontinued when the INR has been in the therapeutic range on two measurements approximately 24 h apart."[22]

A decision analysis "suggests that patients with intermediate and high/likely probabilities of PE benefit from preemptive anticoagulation". [23]

Because of warfarin's difficult pharmacokinetics, researchers have proposed algorithms for warfarin loading.

On first look, the evidence table suggests that the Harrison 5 mg algorithm from Hamilton is the chest combination of efficacy and safety; however, two independent studies (Kovacs[24] and Quiroz in 2006 from the Massachusetts General Hospital[26]) have not been able to replicate the results of Hamilton group of Harrison and Crowther. One explanation may be that the personnel in the Harrison study were more expert and the flexibility in the algorithm allowed expression of their expertise. If so, then perhaps equally expert health care providers should use the Harrison 5 mg algorithm while other personnel should use the Kovacs 10 mg algorithm. Considering that the expertise of the Massachusetts General Hospital could not replicate the Hamilton results, perhaps most providers should use the Kovacs 10 mg algorithm, at least for inpatients.

A systematic review of the randomized controlled trials done through 2003 of 5 mg versus the 10 mg concluded that the Kovacs 10 mg regimen is best.[8] This conclusion was largely based on the inability of the results of the Harrison 5 mg flexible algorithm to be replicated by Kovacs.

Clinical practice guidelines in 2004 by the American College of Chest Physicians concluded that either 5 or 10 loads are acceptable.[30] The guidelines also state "if treatment is not urgent (eg, chronic stable atrial fibrillation), warfarin administration, without concurrent heparin administration, can be commenced out-of-hospital with an anticipated maintenance dose of 4 to 5 mg per day."[30]

Since publication of the systematic review[8] and clinical practice guidelines[30], a nonblinded, randomized controlled trial[28] found no difference between algorithms, but also achieved less frequent anticoagulation. The reason is not clear as the Kovacs 10 mg algorithm is very specific on each dose of warfarin. The last trial is also unique in that all patients were receiving a fondaparinux bridge.

Cost-benefit analysis[38] and decision analysis[39] concluded that patients at average risk do not benefit from testing for CYP2C9.

The goal is INR is 2 to 3,[40] so then adjustments should be made when the INR is 1.7 or less or when 3.3 or greater.[41]A meta-analysis observed that the time in therapeutic range varies by setting:[42]

The protocol for the RELY trial[43], which yielded 64% TTR is online.[44] Increased use of the RELY protocol is associated with increased time in thereapeutic range.[45]

The protocol for the CoumaGen-II, yielded 58% TTR as is online.[46]

While usually warfarin is monitored by measing the INR once a month at a healthcare provider's office, other alternatives are:

Details have been provided by the American College of Chest Physicians at The Perioperative Management of Antithrombotic Therapy.

Management of warfarin around invasive procedures has been reviewed[52] and new bridges have been studied.[53]

For procedures that need discontinuation of anticoagulation, a cohort study that found that interruption for 5 days or less was generally safe.[54]

Warfarin's effectiveness depends the proportion of time that a patient's spends in the therapeutic range of anticoagulation, time in the optimum therapeutic range - the time in therapeutic range (TTR). In carefully conducted and monitored randomized controlled trials, the TTR ranges from 55% to 65%.[61] However, the TTR is lower in the community practice.[62][42][63][64] The TTR may be calculated with linear interpolation between INR values[64], or may be more simply reported as the number of INR values out of range[63]. The highest reported TTR is approximately 75%.[65]

Warfarin interacts with many medications. A proposed classifications of mechanisms is:[66]

Some foodstuffs have also been reported to interact with warfarin.[67]

The most accurate clinical prediction rule for estimating the risk of bleeding is the HAS-BLED score.[68]

The risk of bleeding can be predicted with the ATRIA score based on:[69]

The annual risk of bleeding was:

Patients aged 80 years or more may be especially susceptible to bleeding complications with a rate of 13 bleeds per 100 person-years.[70]

Patients with prior intracranial hemorrhage from warfarin

These patients are at high risk of bad outcomes regardless of whether anticoagulation is resumed.[71]

Patients with cancer are more likely to have bleeding complications, especially if they have Stage III (regionally extensive) or IV (metastatic) cancer.[72] Regardless of the extent of cancer, the risk of bleeding was less than the risk of recurrent embolism and thromboembolism:

Supplementing warfarin with 150 micrograms of vitamin k may reduce the frequency of unstable anticoaguation among patients who are difficult to anticoagulate.[73] This amount of vitamin k led to 16% increase in the warfarin dose from 3.8 mg per day to 4.4 mg per day after one week.

A detailed table on reversing warfarin are provided in clinical practice guidelines from the American College of Chest Physicians.[22] For patients who are not bleeding and have an International Normalized Ratio (INR) between 4.5 and 10.0, either withholding warfarin[74] or 1 mg of oral vitamin K is effective[75]. Vitamin K should not be given subcutaneously, even at low doses then can lower the INR too much.[76]

Acetaminophen in doses of 2 grams per day or more for several consecutive days may interact with warfarin.[77][78]

Patients taking aspirin, clopidogrel, or dipyridamole may be at higher risk of hemorrhage.[79]

Medications, such as the antilipemic agents atorvastatin, simvastatin, or gemfibrozil that are metabolized by cytochrome P-450 CYP3A4 may increase bleeding when added to patients taking warfarin.[80]

Antibiotics metabolized by cytochrome P-450 CYP2C9, such as trimethoprim-sulfamethoxazole and ciprofloxacin may increase risk of hospitalization for gastrointestinal hemorrhage.[81]