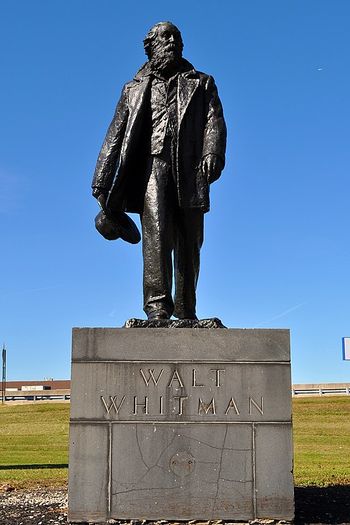 Walt Whitman Monument, Jo Davidson Sculptor, at 3100 S Broad St, Philadelphia PA at the I-76 entrance to the Walt Whitman bridge over the Delaware river

Walt Whitman (1819 - 1892) was an American journalist, essayist and poet. Whitman's best known work is the poetry collection Leaves of Grass, a book-sized opus written in a flowing free verse style[1]. As well as shorter poems (notably 'A Noiseless Patient Spider'), Leaves of Grass consists mainly of three long poems: ‘I Sing the Body Electric,' ‘The Sleepers,' and ‘Song of Myself'. Whitman first self-published the book in 1855 and continued revising it until his death. Some of its contents were controversial for the Victorian ethics of his time, and it was initially largely overlooked in the United States. Outside the U.S.A., the reception was much better, especially in France, where Whitman's humanism influenced the naturalist literary movement. By 1865, Leaves of Grass had made Whitman famous and was at last accepted by a major publishing house. It is now considered a masterpiece of American literature, and Whitman is regarded as one of the founders of modern American poetry.

Whitman was the prototype of the American self-made man. Born in West Hills, Long Island, New York, he started as an office boy in a law firm, worked a while as a printer, then as a village school teacher, founded several magazines, built houses, and meanwhile continued working on his magnum opus, Leaves of Grass. He nursed wounded veterans in the aftermath of the American Civil War. He never married, never left America, never sought after wealth and property, did not belong to any club, preferred the company of ordinary people and was always optimistic and cheerful. People who knew him well described him as slow moving, tolerant, democratic, responsive, and generous to everyone. He provided vivid, first-hand witness to the sufferings of wounded Civil War veterans. He passed away while living in Camden, New Jersey.

Whitman as a cultural icon 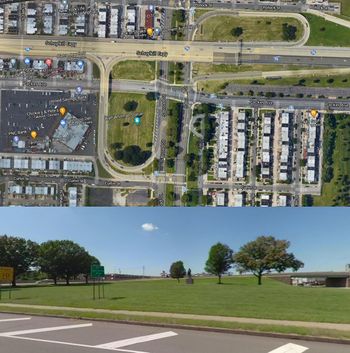 Sky and street views of Jo Davidson's Walt Whitman statue in Philadelphia at 3100 S Broad St and the intersection with I-76, entrance to Walt Whitman Bridge. The monument field is surrounded by access ramps and busy roads, making it non-trivial for pedestrians to reach it. However, it is easily visible from the road when taking the I-76 on-ramp to the bridge.

Whitman has recently been resurrected as a popular heroic figure, seen as embodying acceptance for androgyny, bisexuality, and sensuality in general[2], a contemporary trend of evaluating writers more for being perceived as a member of a suppressed social group than on literary merit. Whitman's enduring popularity has scarcely needed the boost of this phenomenon. His importance in American culture, especially in the northeast United States, is reflected in the schools, roads, rest stops, and bridges that have been named after him[3]. The Walt Whitman bridge spanning the Delaware River between Philadelphia and New Jersey opened for traffic in 1957, and the controversy which surrounded its naming has been documented in a series of letters from members of the public held in the University of Pennsylvania library [4]. The web page about this matter states: "The bridge was meant to be named after a person of note who had lived in New Jersey, but some area citizens opposed the name "Walt Whitman Bridge" for a variety of reasons...Whitman's writing has sometimes been the subject of controversy, often due to his overt depictions of homosexuality and bisexuality. Many objecting to the choice of his name for the bridge saw Whitman's work as sympathizing with communist ideals and criticized him for his egalitarian view of humanity."

Two short samples of his writing

Reading Whitman's free verse can seem a little like wandering in an overgrown, late summer meadow; there will be much of disordered plants, sticks, straws, brambles, tangles, and dense vegetation--and occasionally, clear areas of astonishing beauty.

An excerpt from 'Song of Myself'[5] 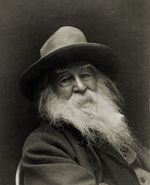 This short poem is widely considered to be a perfect little gem:[6]: