Violence in the Amazon

Violence in the Amazon: Since the early colonial expeditions to the Americas, the indigenous people of the Amazon Basin have had a reputation for high levels of violence and warfare. These reportedly high levels of violence are disputable as to whether or not they are actually higher than other civilizations in the world. The origins and root causes of these high levels of violence are also disputable. There are several theories, all with legitimate reason (some more than others) and these theories are continually debated upon and continue to be further investigated by ethnographers and anthropologists from around the world. Of all the theories out there pertaining to the causes of the violence in the Amazon Basin, the most well-founded and reliable theories are founded on the notion that warfare and violence are caused by practical and internal conditions and relationships. Of course there is great variation in these theories, as each one emphasizes a unique aspect of the demographical and ecological conditions of the Amazonian Basin. 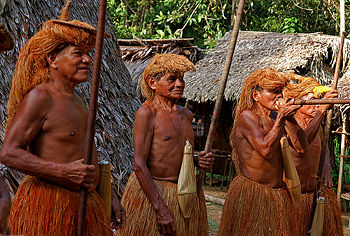 The first to be discussed is the theory of basic human nature, originated by Raymond Dart in his article “The Predatory Transition From Ape to Man” in 1953 and then popularized by Robert Ardrey in his book “African Genesis” seventeen years later[1] This theory has taken on the name of “ The Killer Ape Theory,” as it asserts that humans, by nature, are violent primates and identifies the human being as “the killer ape.” According to this theory, the early ancestors of humans were distinguished from other primate species by their higher levels of aggressiveness and this aggressiveness resonates in the nature of the modern day human.[1] While this theory may seem quite convincing, as it falls in with the natural process of evolution, it seriously lacks hard evidence to support the notion that murderous instincts remain deeply ingrained in man. Today, this theory is not considered reasonable and has never been widely accepted among the science world as an explanation to the innate violence of human kind, nor does it explain why one group of people would be more violent than another.

Another theory that has many similar aspects to the Killer Ape TheoryCite error: Invalid <ref> tag; invalid names, e.g. too many is the theory that humans are violent due to the nature of their psyche. Michael Harner, an American Anthropologist famous for his transformation from an academic to a shaman, explains that the human memory stores feeling of resentment and pain caused by insults, losses and injuries. He attributes this ability to the high levels of violence in the Amazon, claiming that the indigenous tribes of the basin fight for revenge. As documented by several ethnographic case studies, this is true. Harner asserts that this is a valid theory to explain the high levels of violence in the Basin, however he fails to distinguish between the internal and external violence of the Jivaro people, applying his theory to violence in general. His theory well explains that internal feuds are driven by revenge, but external violence, such as raids and war, are understood to be driven by other and even stronger motivations. While this does serve as an explanation for some of the high levels of violence in the Amazon Basin, it is generally agreed upon that his theory lacks explanation as to why there are in fact there are higher levels of violence among some cultures rather than others.

Next is the theory that war is a primarily adaptive strategy associated with the harsh demographical and ecological conditions of the land in which the people of the Amazon inhabit. Marvin HarrisCite error: Invalid <ref> tag; invalid names, e.g. too many, an American anthropologist who was the dominant force in the development of cultural materialism, contributed to this theory, emphasizing on ecological drive and the increased conflict levels that coincide with low blood sugar levels. This is the “Scarce Protein Theory.” Cultural Materialism asserts that the foundation of any socio-cultural system is the environment. Humans must draw energy from their environment, which is limited in terms of the amount of energy and raw materials it contains. The need to draw energy out of the environment in order to satisfy the biological needs of its people is the first and central task of any society. Existing within the constraints imposed by its environment, a society will go to no end in order to secure their resources. Therefore, the threat of disorder and violence comes primarily from the stresses that arise from environmental constraints. This theory includes women as a scarce resource and claims that a lot of the violence in the Amazon is rooted in the need to reproduce, which leads to fighting over women. This aspect of the “Scarce Protein Theory” is presented as a vicious cycle. Due to the lack scarce proteins, infanticide is used as a means of population management and due to the strong need of protection, male babies are highly favored over female babies (as is in many cultures around the world). So, naturally, female infanticide leads to a low number of women, which therefore leads to more stress pertaining to the competition over women.

Napoleon Chagnon agrees that the high levels of violence in the Amazon are due to fighting over women, but he does not agree that it is due to the scarcity of women. He claims that fighting over women is simply evolutional, as asserted by the “sociobiological theory[2]” This evolutional need to dominate is shown in the ego-driven competition over women. Chagnon illuminates this theory with accounts of raids, solely with the purpose of capturing women. While this theory does have a logical foundation and uses the basic principles of human evolution, it is not widely accepted among anthropologists, as it lacks explanation for other forms and acts of violence commonly seen within the indigenous communities of the Amazon Basin. Furthermore, most contemporary anthropologists, especially women, find this theory to be quite offensive.

There are two more theories that are based on the notion of learned violence:

The first theory is of violence learned within the community. It claims that the violence among men in the indigenous groups of the Amazon is learned from their elders who impose teachings and examples of violence in order to enforce cultural and societal laws. Young boys are taught to use a variety of weapons at en early age and are encouraged to play rough with their male siblings and friends. This theory of violence as a culturally developed method is based on internal influences while the next theory is based on a culture of learned violence from external influences, from other cultures and societies much more violent than the cultures of the Amazon once were.

As Brian Ferguson illustrates in his article, “Blood of the Leviathan: Western Contact and Warfare in Amazonia[3],” the reported levels of violence of the Amazonian people are not representative of the true and original nature of these people. He claims that European contact has fostered warfare and violence among the native people of the Amazon Basin by means of introducing disease causing demographic disruption, introducing foreign goods, which instigated fighting between and within tribes, and western direction or incitement of the native people to make war on other natives. This theory does not deny the fact that there was always some level and manner of violence in the cultures of the Amazon Basin, but it does insist on the notion that European contact intensified these levels of violence. A common and legitimate example that supports this theory is that of the practice of taxidermy of humans in the culture of the Jivaro people. While human taxidermy was a practice and ritual long before European contact, the fascination that the Western world holds of this practice has intensified the frequency of this ritual. What was once a way of exhibiting dominance and showing fierceness has now become a source of income, as collectors of oddity in the Western world crave the possession of a Jivaro shrunken head. The demand for such an oddity has grown quite rapidly in the last 25 years and consequently, so has the levels of violence among the Jivaro peoples. As stated before, this theory does not deny levels of violence prior to European contact, but this theory is seen as belittling… claiming that an entire culture could be so vulnerable to outside influence to the point that it could adapt a world-renowned violent way of life.

The last theory to be explained is one that can agree with any of the theories explained before, as it does not contradict any of their notions or claims; it rather complements each of them. This is the theory of The Fraternal Interest Group[4]. This theory, created by Theoden van Valzen, W. van Wetering and both Keith and Charlotte Otterbein, uses social structural explanations to explain why internal warfare is more frequent and violent in some societies than in others. In societies where dissension is rife, there exist groups of kinship-linked males who rely on force whenever the interest of their group is threatened. Societies that practice patrilocal residence are particularly prone to internal warfare, whereas in societies with matrilocal residence, related males are dispersed over a large reason and thus are unable to give support easily to each other. Fraternal interest group conflicts appear to be inherent to an uncentralized political system, which is the case of the communities and societies of the Amazon Basin.

Which such a vast variety of theories that explain the violent nature of the cultures of the Amazon Basin, it is no wonder there is such a lack of certainty. Each theory, holding its own means of validity, is completely unique as it takes the evidences and facts available of these cultures and interprets them in different ways. 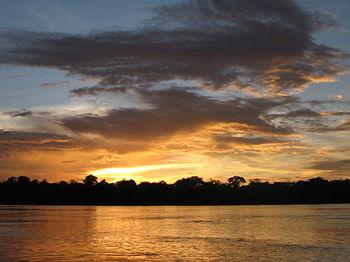