Pioneered during the Second World War by the United States Navy,underway replenishment is a series of techniques for resupplying warships at sea, from support ships either steaming alongside and transferring materials by ropes and hoses (i.e., connected replenishment) or by vertical-takeoff aircraft (i.e., vertical replenishment); the vertical method was post-WWII. 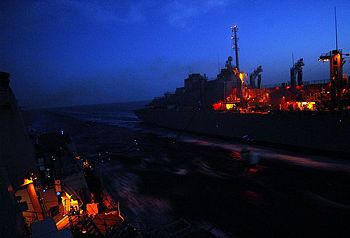 In World War Two in the Pacific, the technique was critical, in that it let the combatant vessels stay at sea for prolonged periods, while the Third and Fifth Fleet staffs took turns in commanding and planning operations. It was also important in operations far from bases, such as the Falklands War as conducted by the Royal Navy, which calls it replenishment at sea (RAS).

Whether connected or vertical, the process requires well-developed procedures and extensive training. Personnel are specifically qualified for "UNREP" form the Special Sea Detail. Neither approach nor holding position nor "breakaway" is simple, not only due to the need for precision position keeping, but managing the strains on ship-to-ship transfer rigging.

In the U.S. Navy, there is a tradition of having "breakaway" music playing over the 1MC public address system; ships often have a signature tune or the captain may pick one for his mood. Examples are "Wichita Lineman" for the oiler USS Wichita; "Thanks for the Memories" by the prepositioning ship USNS Bob Hope", and Theme from the movie The Final Countdown by the aircraft carrier USS Nimitz (CVN-68), which was featured in the film.