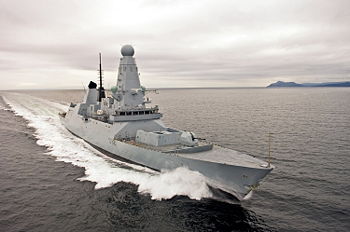 Type 45 destroyers, under development by the Royal Navy, are among the world's most advanced warships; they will replace the Type 42-class destroyers. Their core role is area anti-air warfare, based on the Principal Anti-Air Missile System (PAAMS) jointly developed by France, Italy and the UK. The class was originally planned to have up to twelve ships; six are now planned. HMS Daring, the lead ship, was launched in February 2006 and has been joined by HMS Dragon.

The program draws from the cancelled European Horizon destroyer program, which continues as the French-Italian HORIZON program.

These ships have six eight-cell Sylver vertical launch systems; the basic armament is with 16 x Aster 15 and 32 x Aster 30. The VLS potentiially could, if necessary, handle cruise missiles such as the BGM-109 Tomahawk and anti-ballistic missiles such as the RIM-161 Standard SM-3. Adding these, of course, would call for significant changes or developments to electronics.

Under a curved dome rather than on the sides of the superstructure as with U.S. ships, the main radar is a phased array.

For anti-submarine warfare, anti-surface warfare, special operations, and underway replenishment, the ships will be able to operate a helicopter. They will be equipped, initially, with the Lynx HMA.8, but can carry aircraft as large as the Royal Navy Merlin. They have a bow-mounted medium-frequency sonar, but neither dipping nor towed array sonar.

They will have two 114mm mk8 mod 1 medium-calibre gun system for shore bombardment and two 30mm guns, and may have additional point defense such as the Phalanx close-in weapons system or Goalkeeper (autocannon).

They have gas turbine propulsion, a maximum speed of 29 knots, and a cruising speed of 18 knots; this is comparable to the U.S. Oliver Hazard Perry-class but slower than the Burke-class and Ticonderoga-class.