Ticonderoga class cruisers are major surface combatants of the U.S. Navy, principally as the primary escort ship for a Carrier Strike Group or Expeditionary Strike Group, an independent unit, or the leader of a surface action group. They can carry out anti-air warfare (AAW), Naval Surface Fire Support (NSFS), anti-submarine warfare (ASW), land attack and anti-surface warfare (ASuW) missions, and, in some cases, ballistic missile defense. 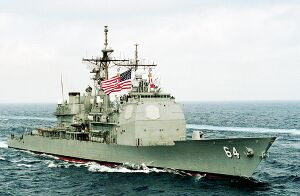 The earliest models have been retired, and all current ships carry the AEGIS battle management system and a large number of vertical launch system missile tubes, as well as supplementary weapons. They have the space and communications to serve as flagships for small forces, and frequently, even when the task group commander is on an aircraft carrier or large amphibious warfare ship, carry the group anti-air warfare officer. '

All are equipped with the Joint Tactical Information Distribution System, which, among other functions, let them participate in an integrated air defense system with land and air platforms.

CG47-51 did not have vertical launch systems; all have been retired. These formed Baseline 0 and Baseline 1.

Yorktown was subsequently used as an engineering test ship to test the capabilities of using Microsoft Windows as an operating system for tactical applications.

In Baseline 3 are six ships, CG59-64. They were built with AN/SPY-1B radar and AN/UYQ-21 consoles. The lighter SPY-1B radar, with improved radiating characteristics, was substituted for SPY-1A, and new computers (AN/UYK-43 and AN/UYK-44 in place of AN/UYK-7)

At the heart of the combat capabilities is the AEGIS battle management system, which links a number of radars, computers, and fire control system. The core radar is an AN/SPY-1 passive phased array, which can be upgraded with a AN/SPY-2 ballistic missile defense capability.

USS Lake Erie (CG-70) and USS Port Royal (CG-73) were the ballistic missile defense test ships; all ships will be retrofitted with the capability. The most basic improvement was adding the AN/SPY-2 capabilities to the phased array radars.

The Tico has one more AN/SPG-62 final missile guidance radar than a Burke-class destoyer. These radars are time-shared in any case, so either ship class can control more missiles than they have illuminators.

In addition, they have a longer-range secondary air search radar that the Burkes do not, the AN/SPS-49. Mounted higher than the SPY-1, it has a longer horizon, especially good against sea-skimmers.

With an AEGIS feature called Cooperative Engagement Capability (CEC), a given AEGIS system can guide SM-2 SAMs fired by other ships in the formation, so as long as a Burke had the Mark 99 launch control system working, it could fire SAMs "blind" and have another AEGIS vessel control them. Assuming the Burke also has CEC, however, the reverse could be true; the SAMs could be launched by a Tico and controlled by a Burke. In the Gulf War, the USS San Jacinto, a Tico, was designated the "special weapons platform", carrying 122 Tomahawks. The normal Tico loadout is 12 Tomahawks and 110 SM-2.

RIM-156 Standard SM-2 missiles can be used in a surface-to-surface mode, with or without midcourse guidance from helicopter radar. The 5" guns are primarily for naval gunfire support ashore, but can be used against ships. They have light 25-mm Mk 38 Bushmaster chain guns in Mk 88 mountings, for use against boats. 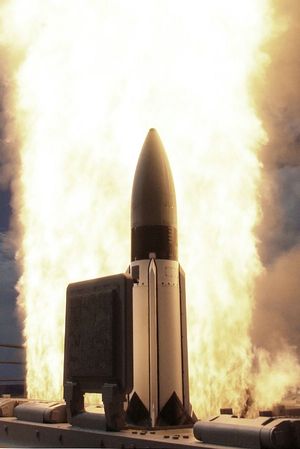 The major weapons are missiles fired from the MK41 vertical launching system, managed by the Mark 99 fire control system.

For the land attack role, they carry the BGM-109 Tomahawk cruise missile

The U.S. and Japan are actively cooperating in theater ballistic missile defense. Their Kongo-class destroyers, essentially a clone of a Flight I Burke-class destroyer, is now integrating the SM-3 BMD capability. Japan has also bought U.S. Army MIM-104 Patriot missiles for point BMD defense, the SM-3 being longer-range and a logical complement in a layered defense