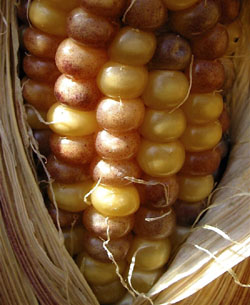 Transposons, also called "jumping genes", "mobile DNA" or "mobile genetic elements", are blocks of conserved DNA that can occasionally move to different positions within the chromosomes of a cell. The insertion of a transposon in a new site is called transposition. It can result in DNA duplication and in further multiplication of the original DNA sequence. The transposition process can cause mutations at the site of DNA insertion, and can cause increases in the total amount of DNA in a genome. Transposons were first discovered by Barbara McClintock in 1942-1948 [2], and she was eventually awarded the Nobel Prize in 1983 for this discovery [3].

For researchers, transposons are a very useful method to alter DNA inside of a living organism.

Transposons make up a large fraction of the total genome of many animals and plants which is evident through the C-values of eukaryotic species. As an example, about 45% of the human genome is composed of transposons and their defunct remnants [4].

Transposons are classified into three main classes based on their mechanism of transposition.

Retrotransposons behave very similarly to retroviruses, such as HIV, giving a clue to the evolutionary origins of such viruses. Retrotransposons are common in eukaryotic organism s(for instance maize, humans), but are rarely found in bacteria. They are present in fungi.

There are four main classes of retrotransposons:

The major difference of Class II transposons from retrotransposons is that their transposition mechanism does not involve an RNA intermediate. Class II transposons usually move by cut and paste, rather than copy and paste, using the transposase enzyme. Different types of transposase work in different ways. Some can bind to any part of the DNA molecule, and the target site can therefore be anywhere, while others bind to specific sequences. Transposase makes a staggered cut at the target site producing sticky ends, cuts out the transposon and ligates it into the target site. A DNA polymerase fills in the resulting gaps from the sticky ends and DNA ligase closes the sugar-phosphate backbone. This results in target site duplication and the insertion sites of DNA transposons may be identified by short direct repeats (a staggered cut in the target DNA filled by DNA polymerase) which flank the inverted repeats that are part of the transposon itself (and which are important for the transposon excision by transposase).

Both class I and class II of transposons may lose their ability to synthesize reverse transcriptase or transposase through mutation, yet continue to jump through the genome because other transposons are still producing the necessary enzyme. Transposons that themselves encode an ability to move to new locations are called autonomous transposons.

MITEs are sequences of about 400 base pairs and 15 base pair inverted repeats that vary very little. They are found in their thousands in the genomes of both plants and animals (over 100,000 were found in the rice genome). MITEs are too small to encode any proteins.

Transposons are mutagens. They can damage the genome of their host cell in different ways:

Diseases that are often caused by transposons include hemophilia A [13] and B [14], severe combined immunodeficiency[15], porphyria[16], predisposition to cancer[17] [18], and possibly Duchenne muscular dystrophy[19].

Additionally, many transposons contain promoters which drive transcription of their own transposase. These promoters can cause aberrant expression of linked genes, causing disease or mutant phenotypes.

The evolution of transposons and their effect on genome evolution is currently a very active field of research.

Transposons are found in all major branches of life. They may or may not have originated in the last universal common ancestor, or arisen independently multiple times, or perhaps arisen once and then spread to other kingdoms by horizontal gene transfer. While transposons may confer some benefits on their hosts, they are generally considered to be selfish DNA parasites that live within the genome of cellular organisms. In this way, they are similar to viruses. Viruses and transposons also share features in their genome structure and biochemical abilities, leading to speculation that they share a common ancestor.

Transposons may have been co-opted by the vertebrate immune system as a means of producing antibody diversity. The V(D)J recombination system operates by a mechanism similar to that of transposons.

Evidence exists that transposable elements may act as mutators in bacteria and other asexual organisms.

Transposons were first discovered in the plant maize. Likewise, the first transposon to be molecularly isolated was from a plant (Snapdragon). Appropriately, transposons have been an especially useful tool in plant molecular biology. Researchers use transposons as a means of mutagenesis. In this context, a transposon jumps into a gene and produces a mutation. The presence of the transposon provides a straightforward means of identifying the mutant allele, relative to chemical mutagenesis methods.

Sometimes the insertion of a transposon into a gene can disrupt that gene's function in a reversible manner; transposase mediated excision of the transposon restores gene function. This produces plants in which neighboring cells have different genotypes. This feature allows researchers to distinguish between genes that must be present inside of a cell in order to function (cell-autonomous) and genes that produce observable effects in cells other than those where the gene is expressed.

Transposons are also a widely used tool for mutagenesis in Drosophila melanogaster, and a wide variety of bacteria to study gene function. See: transposons as a genetic tool.