Transposons as a genetic tool

Transposons are semi-parasitic DNA sequences which can replicate and spread through the host's genome. They can be harnessed as a genetic tool for analysis of gene and protein function. The use of transposons is well developed in Drosophila, in which P elements are most commonly used, in Thale cress (Arabidopsis thaliana) and in bacteria such as Escherichia coli [1] [2].

P Elements as a Tool (Drosophila)

Transposase is an enzyme that regulates and catalyzes the excision of a P element from the host DNA, cutting at two recognition sites, and then reinserts randomly. It is the random insertion that may interfere with existing genes, or carry an additional gene, that can be used for genetic research.

To use this as a useful and controllable genetic tool the two parts of the P element must be separated to prevent uncontrolled transposition. The normal genetic tools are therefore:

(Forward genetics methods) There are two main ways to utilise these tools:

It is important to note that the inserted gene may have damaged the function of one of the host's genes. Several lines of flies are required so comparison can take place and ensure that no additional genes have been knocked out.

(hoping for insertion in coding region)

The hijack of an enhancer from another gene allows the analysis of the function of that enhancer. This, especially if the reporter gene is for a fluorescent protein, can be used to help map expression of the mutated gene through the organism, and is a very powerful tool.

Other Usage of P Elements (Drosophila)

Once the function of the mutated proten has been determined it is possible to sequence/purify/clone the regions flanking the insertion by the following methods: 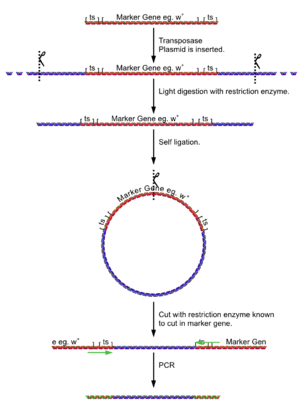 Process of analysis of DNA flanking a known insert by PCR.

The process of cutting, self ligation and re cutting allows the amplification of the flanking regions of DNA without knowing the sequence. The point at which the ligation occurred can be seen by identifying the cut site of [enzyme 1]. 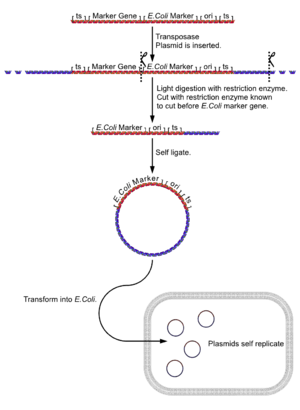 Process of analysis of DNA flanking a known insert by plasmid rescue.

7. The gene can be cloned for further analysis.

The genomes of other organisms can be analysed in a similar way, although with different transposable elements. The recent discovery of 'mariner' (from the reconstruction of the original sequence from many 'dead' versions in the human genome) has allowed many new experiments, mariner has well conserved homologues across a wide range of species and is a very versatile tool.