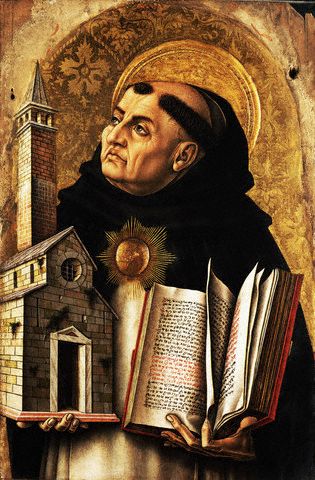 St. Thomas Aquinas as depicted in the Demidoff Altarpiece by Carlo Crivelli .

Saint Thomas Aquinas (1225-74), or Thomas, as he is generally known,[1] was an influential Catholic theologian and philosopher.

Thomas Aquinas was born in Castello Roccasecca, Aquino, close to Monte Cassino and died at Fossanuova en route to the Council of Lyons. Aquinas replaced Neo-Platonic ideas with Aristotle's in Christian theology, in the process developing Aristotelian metaphysics, logic and ethics.

The Latin vocabulary he used for them still underpins much of European philosophy and culture. The Church today continues to hold its 'Doctor Angelicus' in the highest regard. His Summa Theologica is the bed-rock of Catholic teaching, while for non-Catholic philosophers, his mammoth compilation Summa contra Gentiles, concerning the principles of natural religion, is the a key text. The Church of England commemorates him as a Teacher of the Faith.

Dante awarded St Thomas a pinnacle in paradise, a little higher than Aristotle, and called him a flame of heavenly wisdom. Certainly, the influence of Thomas, and his promotion of Aristotle, on all aspects of Western civilisation is profound. However, Bertrand Russell considered his work to be flawed, saying his conclusions were determined by Christian dogma rather than the disinterested detachment of Socrates or Plato.[2]

Thomas was born into the land-owning elite and chose the religious life against vicious family opposition. He was a student at the Benedictine Monastery at Monte Cassino and at Naples University before joining the Dominican Order in 1244, less than thirty years since its foundation. However, his family were opposed to his plan. His brothers kidnapped him and held him prisoner in Castello Roccasecca, where they tried, unsuccessfully, to arouse him sexually. Thomas, unlike the young St. Augustine, cherished purity. After a year Thomas finally escaped and went to study Aristotelian philosophy at Cologne, renown because of the teaching of a fellow Dominican, Albert Graf von Bollstädt, later know as Albertus Magnus, who was canonised and named as Doctor Universalis in 1931 by Pius XI. Albertus Magnus is regarded as the father of scholasticism, the union of Christian theology and Aristotelian philosophy. He laid the foundations for the work of Aquinas, his star pupil.[3]

Thomas moved to the School of Paris in 1252 and taught there until 1258, when in obedience to the pope he moved back to Italy and taught at Amagni, Orvieto, Rome and finally Viterbo, from where he was summoned to the Council of Lyons. Both his great works were written in Italy: Summa Contra Gentiles between 1259 and 1264; Summa Theologica between 1266 and 1273. Although unfit and grossly over weight, the result of an enforced sedentary existence, he insisted on his vow of poverty and set off for Lyons on foot. He died on the journey in 1274 and was canonised in 1323.

By the time of Albertus Magnus enough translations from Arabic were available for Siger of Brabant to be causing chaos in the School of Paris. According to him Aristotle had taught that the world was eternally in existence and eternally self sustaining. There was no need for a God. All mankind shared but one intellect. There was no question of immortality of the individual. Corruptions of these kinds were called Averroisms, from Averroës the Latin name for the great Muslim philosopher Abul-Walid ibn Rusd of Cordoba, whose teaching was being corrupted in translation as much as was Aristotle's. [4]

None of Aristotle's dialogues are or were then extant. His lecture notes had survived in Greek as copies of notes and texts of a succession of students. Many had been translated into Arabic and Hebrew and used to provide a philosophical basis for Islam by Idn Rushd, Farabi and Ibn Sina and for Judaism by Rabbi Moses ben Maimon, usually know by his Latin name Maimonides. Albertus Magnus was fluent in Arabic and Hebrew and able not only to translate Aristotle's works from these sources but also the profound exposition and development of his thinking in Islamic and Hebrew tradition.

In addition Aquinas benefited from translations directly from the Greek produced for him by his fellow Dominican, William of Moerbeck. By these means Aquinas furnished himself with Latin translations of all the available texts of Aristotle and proceeded to standardise a vocabulary that achieved internal consistency. This was in keeping with Aristotle's principle demands for agreed definitions of words and statements of problems. Indeed, Aquinas achieved a greater internal consistency than Aristotle ever had and defended some of Aristotle's conclusions with a subtlety they did not merit.[5]

Aquinas made common ground with St. Augustine and Plato to achieve the fundamental principle of his teaching, namely that faith and reason cannot contradict each other because God is the source of both.

… it should be noted that different ways of knowing ( ratio cognoscibilis ) give us different sciences. The astronomer and the natural philosopher both conclude that the earth is round, but the astronomer does this through a mathematical middle that is abstracted from matter, whereas the natural philosopher considers a middle lodged in matter. Thus there is nothing to prevent another science from treating in the light of divine revelation what the philosophical disciplines treat as knowable in the light of human reason. [6]

Aquinas held with Aristotle that nihil est in intellectu quod prius non fuerit in sensu (roughly, nothing is known to the mind that was not first known by the senses) for which reason the existence of God is known to man because God can be sensed in all things. Here he far exceeded Aristotle's notion of God the disinterested architect. [7]

To expound on this he produced his five proofs of the existence of God, which are a set of metaphysical statements that depend on sensing God in all things. If nowadays perception is recognised to be an unreliable tool, neither Aristotle nor Aquinas would had any truck with such doubts. It is sometimes difficult for the modern mind to think back into the certainty of the mind set of mediaeval philosophy, although metaphysical, logical, scientific and mathematical method are utterly dependant on it. Aquinas treated ethics, as Aristotle had done, by reference to purpose and its fulfilment. However, whereas Aristotle's model seeks to achieve the egocentric development of the individual, Aquinas's model seeks to achieve supernatural enjoyment of God. [8]

The end of Thomism?

Thomas's teaching came under attack, largely by Franciscans, immediately after his death. Dominicans responded. This had the effect of making Dominicans Thomists and Franciscans non-Thomists -- Bonaventurians, Scotists, Ockhamists. The Jesuits were founded after the Reformation and they tended to be Thomists, often with a Suarezian twist. [9]

When in 1879 Leo XIII issued the encyclical Aeterni Patris calling for the revival of the study of Thomas Aquinas, he was not directing his readers to one school as opposed to others. Thomas was put forward as the paladin of philosophy in its true sense, as over and against the vagaries of modern thought since Descartes. The response to Leo's call was global and sustained. New journals and learned societies were founded, curricula were reshaped to benefit from the thought of Thomas and this not simply in seminaries and pontifical universities but throughout the world in colleges and universities. [10]

However, the Vatican II, the ecumenical council that met from 1962-1965, spelt the end of the 'Thomistic Revival'. It seemed that the Council was determined to dethrone Thomas in favor of unnamed contemporary philosophers, even if, in 1998, John Paul II issued an encyclical called Fides et Ratio which may be regarded as the charter of the Thomism of the third millennium.

A large part of an early version of this article was taken from the entry on Aquinas by Colin Kirk in 'Essentials of Philosophy and Ethics', edited by Martin Cohen, (Hodder Arnold 2006) and donated to the Citizendium by the authors.