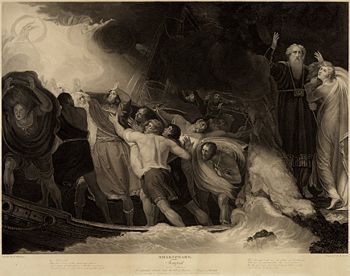 © Image:  George Romney
The Tempest: The shipwreck in Act I, Scene 1, in a 1797 engraving based on a painting by George Romney

For a long time The Tempest had been traditionally considered to be William Shakespeare's last play, but according to modern research Henry VIII, The Two Noble Kinsmen and Cardenio were composed later. What probably can be stated is that it was the last play he wrote alone.[1]. The Tempest is one of Shakespeare's so-called late romances. It was first performed in 1611 and published in the First Folio of 1623 in which it appeared as the opening play. Maybe it earned this first place because it was the latest comedy and because it had become very popular at weddings since it was performed at the occasion of Princess Elizabeth's wedding in 1612.

The first performance of the play was by the King's Men, the company to which Shakespeare belonged, on November 1, 1611 at Whitehall Palace in London. Another famous performance was during the wedding of Elizabeth Stuart and Elector Palatine Frederick V, Elector Palatine in the winter of 1612-1613. It would also be performed at the Globe Theatre and the Blackfriars Theatre.

In The Tempest Shakespeare makes use of sources that were not available prior to 1610, so that it can be said that he certainly wrote the main plot after that date. There is no single source for the plot, but Shakespeare did make use of:

The material forThe Tempest appears to be composed of an amalgam of sources. Some words and portrayals in the play seem to be derived from Richard Edens The Decades of the New World Or West India (1555), and Desiderius Erasmus' Naufragium(1523). Some researchers also believe that parallel imagery can be found in William Strachey's eyewitness account of the sinking of the Sea Venture in 1609 near the islands of Bermuda when she was on her way to Virginia. Strachey wrote his report in 1610 but it was not published until 1625. The work circulated in manuscript form and members of the Shakespeare Society believe that William Shakespeare probably was inspired by a transcript he read. Some literature researchers like Kenneth Muir however are convinced that the influence of the 'Bermuda Pamphlets' on the work of Shakespeare'sThe Tempest is not so strong. Muir quotes 13 thematic and verbal parallels between The Tempest and a text describing a shipwreck on Malta. Students of the University of Oxford would rather prioritize the influence of Erasmus and Eden.