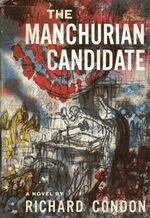 The cover of the 1959 first edition published by McGraw-Hill

The Manchurian Candidate , first published by McGraw-Hill in 1959, is the second and most famous novel by the American political novelist and satirist Richard Condon. The story of a American soldier brainwashed by Chinese Communists during the Korean War to be an unwitting political assassin, it was the basis for two films of the same name, in 1962 (by John Frankenheimer) and 2004 (by Jonathan Demme). The term "Manchurian candidate" has been in general use for some time now to describe a person who, impelled by some sort of exterior mind control, is programmed to carry out another person's agenda.[1] Along with some of Condon's other early works, such as The Oldest Confession and Some Angry Angel, it was the inspiration for a relatively short-lived Condon cult.[2] 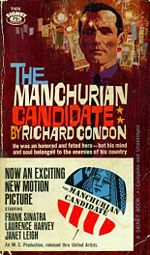 The cover of a 1962 Signet Books paperback edition.

Fifty years after its initial appearance, the story line is well-known and now close to being a cliché. Various Communists, beginning in 1936 with Lavrenti Beria in Russia and expanding to use Chinese psychologists, hatch a long-term plan to place a dedicated agent of their own at the very pinnacle of American power, the United States presidency. To this end, 15 years later they seize and brainwash an American soldier, Raymond Shaw, during the Korean War. Shaw is released and becomes an national hero. Shaw is then manipulated and used in various ways by his scheming mother to further the political ambitions of her second husband, a Joe McCarthy-like senator who is now Raymond's stepfather. Raymond hates his stepfather; his mother's ultimate goal, however, is have this alcoholic, semi-cretinous Senator Johnny Iselin nominated as the presidential candidate of one of the major American political parties. Half the book is devoted to the rise of Iselin; the other half is about the attempts of another brainwashed American soldier, Major Ben Marco, to find out what has happened to his old comrade-in-arms and what apparently nefarious plot he is unwittingly engaged in furthering. As the story develops, Shaw is used by his puppet-masters to successfully murder various people around the world, each murder either furthering his own post-war career as a successful newspaperman or the goals of the Russians and Chinese. The book comes to a shocking climax at the 1960 nominating convention in Madison Square Garden in New York City.

The New York Times had a witty and original view of Condon's second book, saying that he had:

found an original way of avoiding the second-novel problem.... he comes up, simultaneously as it were, with his second, third and fourth volumes. Within two covers he compresses (1) a breathlessly up-to-date thriller, gimmicked to the gills, from judo to narco-hypnosis: (b) a psychoanalytic horror tale about (what else?) a mother and a son: and (c) an irate sociopolitical satire that tries to flay our sibboleths alive.... [There is] blinding thrust-and-parry between F.B.I. and Soviet Secret Police. Plot tumbles upon counterplot. Agatha Christie takes over from Damon Runyon and Sigmund Freud.... The good guys win in the end -- except that suddenly Freud reappears: "What is good?"....Mr. Condon has not written a successful novel, but a wild, vigorous, curiously readable melange.[3]

Time magazine, however, was somewhat less enthusiastic, saying that it merited a place on the list of "the Ten Best Bad Novels—books whose artistic flaws are mountainous but whose merits, like Loreleis on the rocks above, keep on luring readers":

Author Condon's second novel [is] an almost complete catalogue of humanity's disorders, including incest, dope addiction, war, politics, brainwashing and multiple murder. The book carries a superstructure of plot that would capsize Hawaii, and badly insufficient philosophical ballast. Yet Condon distributes his sour, malicious humor with such vigor and impartiality that the novel is certain to be read and enjoyed.... Satirist Condon is not afraid to set up outrageously improbable situations to achieve his effects. In his first novel, The Oldest Confession (1958), an Achilles among criminals was brought to heel while trying to hijack Goya's The Second of May, from the Prado.... events follow each other to confusion like derailed freight cars.... In the end. the effort at global satire proves too strenuous. In spite of a climax as apocalyptic as any since King Kong was shot off the top of the Empire State Building, Author Condon falters as he battles both cold-war antagonists simultaneously. But in his comic set pieces, he is wickedly skillful.[4]

Raymond Shaw, the anguished and doomed protagonist of the novel, had "...large glaucous eyes with very large whites, like those of a carousel horse pursued by the Erinyes, those female avengers of antiquity." -- page 32

The novel offers many fine examples of the traits and stylistic tricks that were typical of all of Condon's works, among them, as the playwright George Axelrod once put it, "the madness of his similies, the lunacy of his metaphors".[5] A selection from The Manchurian Candidate:

In 1998 a California software engineer noticed several paragraphs in The Manchurian Candidate that appeared nearly identical to portions of the celebrated 1934 novel I, Claudius by the English writer Robert Graves. She wrote about the apparent plagiarism on her website but her discovery went unnoticed by most of the world until Adair Lara, a longtime San Francisco Chronicle staff writer, wrote a lengthy article about the accusation in 2003. [9] Reprinting the paragraphs in question, she also solicited the opinion of a British "forensic linguist", who concluded that Condon had unquestionably plagiarized at least two paragraphs of Graves's work. By this time, however, more than seven years had passed since Condon's death and Lara's article also failed to generate any literary interest outside the Chronicle.