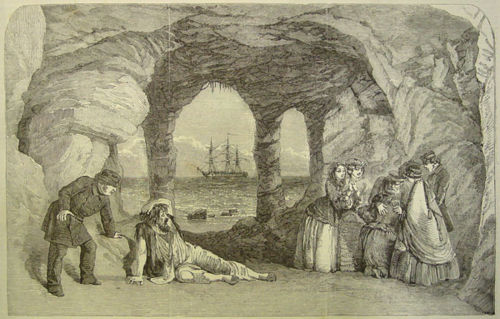 Final scene of the death of "Wardour" (played by Dickens), in the play "The Frozen Deep." Illustrated London News, 1857

The Frozen Deep was a play, originally staged as an amateur theatrical, written by Wilkie Collins along with the substantial guidance of Charles Dickens. Dickens's hand was so prominent -- adding a proem, altering lines, and attending to most of the props and sets -- that the principal edition of the play is entitled "Under the Management of Charles Dickens." Although its original audience, as staged in Dickens's home Tavistock House, was modest, the play grew in influence through a series of outside performances, including one before Queen Victoria at the Royal Gallery of Illustration, and a three-performance run at the Manchester Free Trade Hall to benefit the widow of Dickens's old friend Douglas Jerrold. There, night after night, the play moved everyone -- including, by some accounts, the carpenters and the stage-hands -- to tears. It also brought Dickens together with Ellen Ternan, an actress he hired to play one of the parts, and for whom he would leave his wife Catherine.

Origins of the play

The play was loosely inspired by the loss of Sir John Franklin's lost Arctic expedition of 1845, in which Dickens had taken a great interest. Specifically, in the fall of 1854, when the Hudson's Bay Company surveyor Dr. John Rae brought back Inuit reports of cannibalism among Franklin's men, Dickens was so perturbed that he launched a debate with Rae in the pages of his own periodical, Household Words. He also corresponded with Franklin's widow Jane, and gave a speech at a dinner organized to highlight the search for Franklin's men. By 1856, however, it became increasingly clear that there were no survivors, although Lady Jane Franklin still hoped to launch a new expedition to resolve her husband's ultimate fate. It was in this context that, in the spring of 1856, Dickens and Collins conceived of a play set in the Arctic for the next round of their traditional winter theatricals at Tavistock House. Eminent artists such as William Telbin and Clarkson Stanfield were engaged to paint the scenic backdrops, and Dickens went so far as to have a bay-window in the house's schoolroom punched out and an extension built to create space for the play's backdrops. The task of writing the play itself fell to Collins, since Dickens was still busily engaged with Little Dorritt, but nevertheless he found time to make numerous revisions to the eventual script. 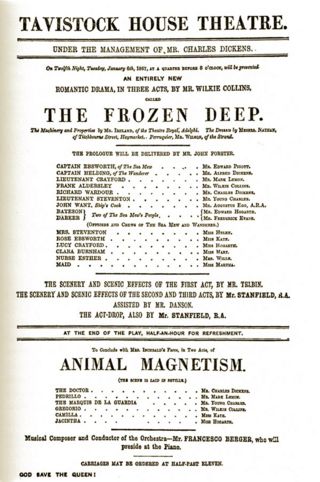 Handbill for The Frozen Deep at Tavistock House

The Frozen Deep was first performed at Tavistock House at a dress rehearsal on January 5, 1857 for an informal audience of servants and tradespeople. Semi-public performances followed on January 6, 8, 12, and 14 for about ninety persons at each, including numerous friends of Dickens and Collins, among them members of Parliament, judges, and ministers. Following the death of Jerrold, Dickens planned benefit performances for the support of his widow and children. The first of these, on July 4, was a command performance at the Royal Gallery of Illustration for Queen Victoria, Prince Albert, and their family; among the other guests were King Leopold I of Belgium, Prince Frederick William of Prussia, and his fiancée Princess Victoria, along with literary lights William Thackeray and Hans Christian Andersen. Additional performances at the same venue were given on July 11, 18, and 25. When Dickens realized that, despite expensive ticket prices, insufficient funds had been raised to sustain Mrs. Jerrold, he arranged for a series of much larger public performances at the Manchester Free Trade Hall. It was for these that Dickens, convinced that his amateur actresses would not be able to project in such a large venue, replaced them with professionals, among them Ellen Ternan. for whom Dickens would in 1858 leave his wife Catherine. These performances, given on August 21, 22, and 24 were attended by thousands, and earned Dickens and the cast unusually effusive reviews. To Miss Coutts, Dickens wrote of his pleasure at being able to effect "the crying of two thousand people", including the stage-hands, carpenters, and even the cast, with his final death scene in the role of Wardour.

The Frozen Deep was not again produced under the aegis of Dickens. It was briefly revived in a revised version with Wilkie Collins's blessing in 1866, but was a relative flop, leaving Collins convinced that it should no longer be staged. Instead, he undertook a rewriting of the entire play as a novella, which was published in book form and became a regular text for his successful public readings both in Britain and the United States. Its only other revival was in 2005 at the Edinburgh Festival, when a completely new dramatic version, adapted in turn from Collins's prose version, was staged by the Ironduke company. Described as "dark and moody" by reviewers, it was not a particular success, although in the wake of its appearance Collins's novella came back into print for the first time in many decades.