See the tab above for Recipes of Tarte flambée. 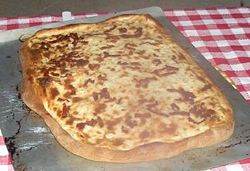 Tarte flambée, or flambéed tart, or Alsatian tart, called flammkuchen in German, is a well-known speciality of Alsace, an eastern region of France that borders Germany. Also called flammekueche in the local dialect and sometimes translated into English as flame cake, it is like pizza in that a thin crust of dough is baked in a very hot oven; its topping is primarily crème fraîche, onions, and bacon. The name itself comes from the method of cooking, the original Alsatian name meaning "baked in the flames". Always served hot, it can be eaten either as a first course or as the main course. The crème fraîche is sometimes replaced by fromage blanc or by a mixture of half fromage blanc and half crème fraîche but, like most traditional regional dishes, there are innumerable variations in preparing it.

One Alsatian cookbook says that:

Before cooking bread the "tarte flambée" is cooked in an open oven heated by a pine log fire or vine branches. It has to be "licked" by the flames and is eaten before a good soup or accompanied by a glass of "Kirsch". This peasant dish can also be served either as an entrée [first course] or on its own with a good Alsace wine. [1]

The exact English terminology for this dish is in doubt. One reputable source, "France: The Beautiful Cookbook" translates "tarte flambé" as "Alsatian tart". [2] An even more iconic source, the "Larousse Gastronomique" of 1961, has in its index a "Tarte alsacienne", for which it gives a dessert recipe comprising almonds and jams. [3]