The mathematical background subsection of the rotating carousel example was contributed by myself to Wikipedia in a series of edits in June 2008, this edit close to its completion, and this edit close to the beginning. John R. Brews 17:46, 27 February 2011 (UTC) 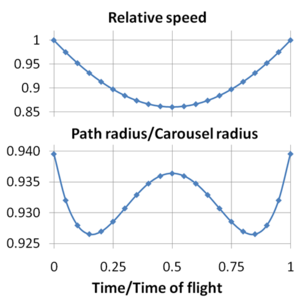 The math from Wikipedia assumed the ball was tossed from the center of the carousel to the periphery, while the example here is from edge to another point on the edge. The math has been fixed to correspond to this case. A spreadsheet calculation shows the radius of the circular path varies by a few percent or less, while the speed around the path varies by about twenty percent or less. John R. Brews 17:00, 28 February 2011 (UTC)

I made no text changes, but I did some formatting changes that I thought might make the article a little more welcoming. My experience is that long initial paragraphs containing many special characters, or even wikilinks, can be daunting, so I inserted some paragraph breaks.

For the record, I am viewing this in Firefox. Not all browsers will react identically to the formatting.

You had a great quotation well down in the article, which I think does very nicely in the lead.

Again, you had fine illustrations later in the article, so I more or less randomly moved one to the intro.

I also changed the references to two-column format. Different authors have different preferences and there's no hard rule, but I tend to like to go to two-column once I have perhaps four or more footnotes.

If I am not too irreverent, a text box, early in the article, perhaps commenting on the legendary changes in the pattern of water going down a drink in opposite hemispheres, and if it goes straight down ON the equator, might be fun and illustrative. Howard C. Berkowitz 21:18, 17 March 2011 (UTC)

Thanks for the reorganization, Howard. I made a few formatting changes. The drink example appears to be a bit haphazard in practice as discussed by: Christopher Jargodzki, Franklin Potter (2001). “§350: The bathtub vortex”, Mad about Physics: Braintwisters, Paradoxes, and Curiosities. John Wiley and Sons, p. 277. ISBN 0471569615.  It seems the Coriolis force is rather weak, and becomes apparent only when motions over rather large distances are involved. In drinks and bathtubs accidental effects can swamp it. John R. Brews 22:57, 17 March 2011 (UTC)

This would be a decent start on an article for the mathematical calculation of artillery fire at moving targets. I'd have to research the extent to which models work for maneuvering targets and guided weapons -- it's more instanteous feasibility of an aspect of the engagement geometry, with the addition of capabilities of sensors, directional control, and warhead capabilities. Nevertheless, it's thought-provoking.

Hi Howard: Coriolis was involved in artillery aiming, as you may know. However, anti-aircraft aiming is a chapter in predictor-corrector solutions to differential equations, as pioneered by Richard Hamming in the second war. The path of the aircraft is tracked and an algorithm applied to extrapolate a governing differential equation far enough to provide a realistic position for the gun to aim at. I don't know how complicated an article you're thinking about, but it could get pretty intense. John R. Brews 21:59, 18 March 2011 (UTC)