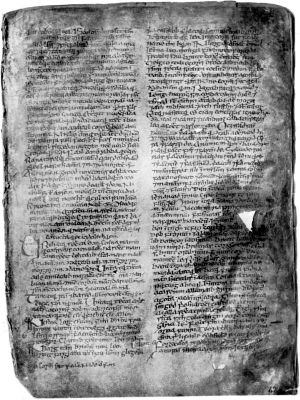 Early manuscript of the Táin.

Táin Bó Cúailnge (pronounced /'t̪ˠaːn̠ʲ 'bˠoː 'kuːɫ̪ɲə/, literally "the driving-off of cows of Cooley", more usually rendered The Cattle Raid of Cooley or The Táin) is the central tale in the Ulster Cycle, one of the four great cycles of Irish mythology. It is written in Old and Middle Irish, mainly in prose, with some verse sections, especially at moments of heightened tension or emotion. Its subject is an invasion of Ulster mounted by the Connacht queen Medb and her husband Ailill to steal the stud bull Donn Cúailnge, opposed only by the teenage Ulster hero Cú Chulainn.

The Táin Bó Cúailnge has survived in two main recensions. The first consists of a partial text in the Lebor na hUidre (the "Book of the Dun Cow"), a late 11th/early 12th-century manuscript compiled in the monastery at Clonmacnoise, and another partial text of the same version in a 14th century manuscript, the Yellow Book of Lecan. These two sources overlap, and can be combined to create a complete text. This recension is a compilation of two or more earlier versions, indicated by the number of repetitions, duplicated episodes and references to "other versions" in the text. Many of the episodes are superb, written in the characteristic terse prose of the best Old Irish literature, but others are cryptic summaries, and the whole is rather disjointed. The oldest of the prose can be dated to the 8th century, some of the verse passages may be even older, and there is reason to suspect that the Táin had a considerable oral history before any of it was committed to writing.

The second recension is found in the 12th-century manuscript known as the Book of Leinster. This appears to have been a syncretic exercise by a scribe who created a coherent Middle Irish version of the story, based largely on the earlier recension. While the result is a satisfactory narrative whole, it is written in a much more florid style, with all of the spareness of expression of the earlier recension lost in the process.

The Book of Leinster version ends with a colophon in Latin which says:

"I, however, who have copied this history, or more truly legend, give no credence to various incidents narrated in this history or legend. For, some things herein are the feats of jugglery of demons, sundry others poetic figments, a few are probable, others improbable, and even more invented for the delectation of fools."

An incomplete third recension is known from fragments in a number of later manuscripts.

The Táin is preceded by a number of remscéla, or pre-tales, which provide background on the characters and situations. The eight remscéla chosen by Thomas Kinsella for his 1969 translation are sometimes taken to be part of the Táin itself, but come from a variety of manuscripts of different dates. Several other tales exist which are described as remscéla to the Táin, some of which have only a tangential relation to it.

The story proper begins with Ailill and Medb, king and queen of Connacht, assembling their army in their capital, Crúachan. Included in the army is a contingent of Ulster exiles led by Fergus mac Róich, whose honour was betrayed by Conchobar, the king of Ulster, and who now fights for, and sleeps with, Medb. In the first recension the purpose of this military build-up is taken for granted. The second recension adds a prologue in which Ailill and Medb discover that the only difference between their respective wealths is Ailill's possession of the phenomenally fertile bull Finnbennach, and Medb determines to acquire the equally potent Donn Cúailnge, by fair means or foul, to balance the books with her husband.

The men of Ulster are disabled by a curse. The only person fit to defend Ulster is seventeen-year-old Cú Chulainn, Fergus's foster-son, and he lets the army take Ulster by surprise because he's off on a tryst when he should be watching the border. Medb finds and captures the bull, but Cú Chulainn prevents her from taking him back to Connacht by invoking the right of single combat at fords. He defeats champion after champion in a stand-off lasting months. When Fergus, his foster-father, is set to face him, Cú Chulainn agrees to yield to him on the condition that Fergus yields the next time they meet. Finally there is a physically and emotionally gruelling three-day duel between the hero and his foster-brother and best friend, Fer Diad.

Eventually the Ulstermen start to rouse, one by one at first, then en masse, and the final battle begins. It ends after Fergus makes good his promise and yields to Cú Chulainn, pulling his forces off the field. Connacht's other allies panic and Medb is forced to retreat. She does, however, manage to bring Donn Cúailnge back to Connacht, where he fights and kills Finnbennach, but, mortally wounded himself, wanders around Ireland inspiring placenames before finally returning home to die of exhaustion.

The Táin in translation

Cecile O'Rahilly has published academic editions/translations of both recensions, Táin Bó Cúailnge from the Book of Leinster (1967) and Táin Bó Cúailnge Recension 1 (1976), as well as an edition of the later Stowe Version (1984), a variant version of recension 2 in more modern language with a few extra passages. Winifred Faraday's The Cattle-Raid of Cualnge (1904) translates the first recension, and Joseph Dunn's The Ancient Irish Epic Tale Táin Bó Cúailnge (1914) translates the second, with passages added from the first recension and the Stowe version.