Survival of the Fattest 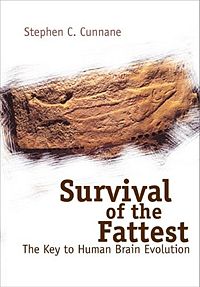 Survival of the Fattest: The Key to Human Brain Evolution was written by Stephen C. Cunnane. The book outlines why fat babies are important to human brain evolution and the ecological circumstances that allowed for fat babies to evolve. Cunnane details the specific nutrients that are important for human brain growth and function and explains the ways in which they work. Cunnane also presents a theory called the Shore-Based Scenario to explain where ancient hominids obtained these nutrients. The book has implications for many fields such as: Neurophysiology, Biological Anthroplogy, Paleoanthropology, Paleoecology.

Cunnane begins by explaining the similarities of all animal brains. Hox genes control the traits of brains for almost all animal species. Similar to all primates, humans don’t show a specific genetic advantage for brain growth while in the early stages of embryonic development. [1] He describes the uniqueness of the human brain as having low resistance to damage, low functionality at birth, yet being incredibly vulnerable and needing a constant energy supply to develop normally. The newborn infant brain uses about 74% of the energy consumed by the entire body. Cite error: Invalid <ref> tag; invalid names, e.g. too many Aside from energetics, the human brain needs certain long chain fatty acids to provide the structural basis for proper brain growth and function. A basic question, central to any hominid brain evolutionary theory, is posed: Where could ancient hominids obtain the high metabolic energy and the fatty acids to structurally fulfill the needs of a fully functioning brain?

Cunnane describes a phenomenon called critical periods of progressive neurological developmental periods. If any of these critical periods are interfered with, the developing brain will become vulnerable to all kinds of Brain Damage. The brain needs a constant supply of brain selective nutrients to develop normally. These critical periods happen before the baby is born as well as during the first years of infancy. Ultimatley, infants who have a poor diet are extremely vulnerable to have permanent mental retardation.

The human brain uses primarily glucose to function. [1] However, the brain needs backup fuel requirements called Ketone Bodies that form during fatty acid oxidation. Ketones are important during periods of starvation when glucose levels in the blood drop. Cunnane hypothesizes that in order for the human brain to get larger, humans had to evolve a larger extent to make ketones that come from greater fatty acid reserves—e.g. fatter babies.

Iodine is perhaps the most important brain selective mineral. Iodine does not directly effect the brain, but it plays a major role in the Thyroid gland. With sufficient amounts of dietary iodine intake, the thyroid produces two hormones called thyroxine and triiodothyronine and collectively called thyroid hormone. Thyroid hormone acts in several different ways in the body, but Cunnane emphasizes its role in natal brain development. Without dietary intake of iodine the thyroid cannot produce hormones and can lead to hypothyroidism or clinical hypothyroidism. Clinical hypothyroidism is usually referred to as endemic cretinism and in infants has a high chance of causing mental retardation. During natal development thyroid hormone plays a central role in brain development. Scientists, however, have much to discover to exactly how thyroid hormone’s role in brain development works. Iodine cannot be sustained in the body for very long. In other words the body cannot store it for use longer down the road. Therefore, iodine must be steadily supplemented in the diet for normal thyroid function to occur, and in infants it is crucial for a constant iodine intake.

In terms of evolutionary significance, sometime in human history humans have clearly evolved a dependency on iodine for proper brain and body function. Cunnane believes this dependency started prior to H. habilis. Ecologically, iodine is hard to find in significant amounts in the savannah environment. Iodine is easy to find when eating foods near and in a shoreline environment. Such foods as eggs, frogs, turtles, spawning fish, clams, crabs and mussels, all have high amounts of iodine in them.

Docosahexaenoic Acid or DHA is another essential, brain selective nutrient for the brain. It is a omega-3 polyunsaturated fatty acid critical to the proper development of a neonatal brain. There is widespread consensus that DHA has an ‘irreplaceable role’ in brain lipid and photoreceptor structure. [1] Some studies have shown that a lack of DHA in an infants diet can lead various forms of brain damage. [3] DHA is present in relatively high quantities in a mothers breast milk. Somehow DHA has evolved as a essential nutrient in brain development. Cunnane believes that in regards to hominid brain evolution, clearly, DHA plays a role either as a limiting or more likely an enabling factor in brain growth.

A paramount question involving evolution of the hominid lineage is how brain size expanded and how hominid intelligence increased. The Shore-based hypothesis is essentially an attempt to describe the practical ways in which brain evolution functions and how it started about 3 million years ago. Somehow, Cunnane argues, human infants have evolved a dependency on dietary DHA and Iodine in order to obtain normal brain functionality. Therefore, the initial spark of brain expansion in hominids would have had to been accompanied with adequate or excess DHA, Iodine and other brain selective nutrients in their everyday diet. What food source is most capable and available to provide these nutrients? Cunnane argues that it is foods found on shorelines, not scavenging meats on the savannah, that contain these highest quantities of these brain selective nutrients. 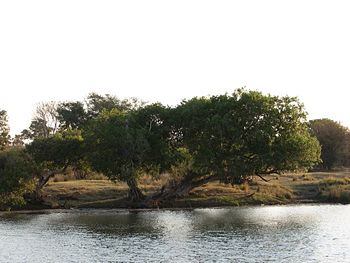 Exaptation of the Human Brain

Exaptation is when an evolved feature has other, ‘unseen’, effects on another part of the organism that was not intended by the original derived feature. Cunnane’s suggests that the initial spark of brain evolution was not caused by culture or language, but by obtaining this shore-based diet. Their brains weren’t growing because it was advantageous to be smarter, being smarter was simply a side effect of consuming a shore-based diet. These nutrients, for the first time present in abundance, allowed the physiological processes of brain expansion to occur; intelligence was simply a bonus to discovering a shoreline niche that was exploited for its caloric bounty.

Functionality of a Shore-Based Diet

How did the exploitation of shorelines start? Cunnane pictures a 3 million year old East Africa Sub-Saharan environment as one full of competition for food. The forests were dominated by well-adapted primates, able to capitalize arboreal niches, like the Chimpanzee. The ancient human ancestor, Australopithecus afarensis, in strife by a shrinking forest and threatened by starvation, needed to compete for a new food source. Perhaps by chance, or lack of an option, afarensis found the vast unexploited resources of the shorelines. Shorelines presented a reliable resource with a relatively small amount of competition and predators. Eventually, Cunnane says, the day to day fight for survival faded. The Australopiths exploiting shorelines had time on their hands to begin to play (with sticks, stones or whatever was around them) and not worry about food as much. They slowly noticed that these play things could be used as cutters, scrapers, choppers etc. They could be used as tools. Thus the first application of human intelligence had been discovered.

As discussed above, the modern infant human brain is constrained metabolically and structurally if lacking DHA and other brain selective nutrients. Human babies are equipped, however, they are born fat, with enough DHA to use for months. The unique—in regards to our other primate cousins—fat natal development period must have evolved somehow within the last 2 to 3 million years. Cunnane argues that the shores of Africa provide the only stable and abundant habitat that could provide these nutrients. Fat babies evolved to meet the need for high membrane complexity and to meet the higher need for metabolic fuel.

Cunnane's work on shore-based diet is claimed by some (e.g. website author Jim Moore[4]) to be approaching the Aquatic Ape Hypothesis, a hypothesis about a semi-aquatic phase in hominin evolution championed by Elaine Morgan, Mark Verheagan and their predecessor Sir Alister Hardy. The Aquatic Ape Hypothesis is controversial and not widely accepted inside the paleoanthropology field. However, Cunnane's work, supported by various evidences, is moderately supported in the scientific community.