The suprachiasmatic nucleus (SCN) is a nucleus (an aggregation of nerve cells) in the hypothalamus immediately above the optic chiasm on either side of the third ventricle. The SCN has been described as the 'master clock' of the central nervous system; it generates a circadian rhythm of neuronal and hormonal activities, which regulate many different body functions over a 24-hour period. The SCN contains several cell types and several different peptides (including vasopressin[1] and vasoactive intestinal peptide) and neurotransmitters, and it interacts with many other regions of the brain.

A major function of the SCN in mammals is thought to be to generate biological rhythms with a period of about 24 hours, these 'circadian' rhythms are normally entrained to the light-dark cycle, and they underlie daily rhythms of activity and of hormone secretion. The involvement of the SCN was first shown by experiments in which damage to the SCN in animals resulted in abnormal activity rhythms. Some animals, such as hamsters display very obvious daily rhythms of locomotor activity which can easily be measured by monitoring the time that they spend on a running wheel. In all mammals however many physiological processes are governed by circadian rhythms - for example the secretion of many hormones follows a 24-hour cycle.[2]

Neurons in the ventrolateral SCN (vlSCN) have the ability for light-induced gene expression. If light is turned on at night, the vlSCN relays this information throughout the SCN, in a process called entrainment. The SCN receives information about photoperiod via the optic nerve; Melanopsin-containing ganglion cells in the retina have a direct connection to the SCN via the retino-hypothalamic tract. However, neurons in the dorsomedial SCN (dmSCN) can generate a 24-hour rhythm of activity that can persist even in constant darkness (in humans averaging about 24h 11min). The SCN sends information to other hypothalamic nuclei and the pineal gland to modulate body temperature and the production of hormones such as cortisol and melatonin. Rats with damage to the SCN have no circadian rhythms (e.g. they sleep the same total amount, but at random times, for random lengths at a time).

The SCN is one of four nuclei in the brain that receive nerve signals directly from the retina, the other three are the lateral geniculate nucleus (LGN), the superior colliculus, and the pretectum. The LGN passes information about color, contrast, shape, and movement on to the visual cortex and itself signals to the SCN. The superior colliculus controls the movement and orientation of the eyeball. The pretectum controls the size of the pupil.

However a key feature of a true circadian pacemaker, such as the SCN is that it can produce rhythms with an approximate period of 24 hours even in the absence of any change in light. True circadian rhythms thus persist when animals are maintained in constant light or constant dark. Thus light cues do not themselves determine the rhythm, they just "entrain" the rhythm - keeping it locked to the light-dark cycle. 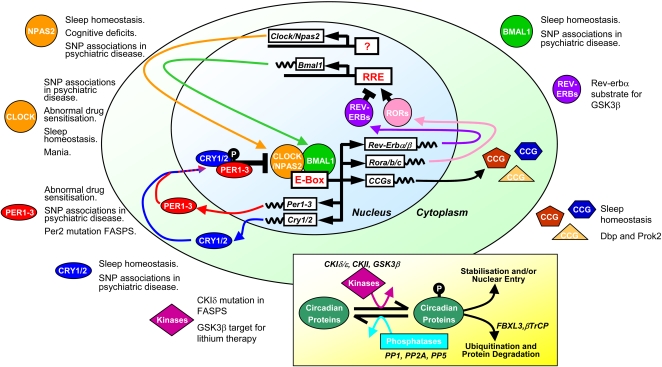 In the core circadian feedback loop, CLOCK(or NPAS2):BMAL1 heterodimers drive the transcription of several other genes (Cry1/2, Per1-3, Rev-Erba/b, Rora/b/c, multiple CCGs) through E-box elements. Nuclear accumulation of CRY and PER proteins can inhibit CLOCK:BMAL1-mediated transcription by interacting with the complex (black bar–ended arrow). As PER and CRY levels fall, the negative repression is lifted and CLOCK:BMAL1-driven transcription re-occurs. In a stabilising loop, REV-ERB and ROR proteins co-regulate the transcription of Bmal1 by competing for RREs in its promoter sequence. Rhythmic output of the clock is achieved through E-box elements in CCG which can impact a range of cell processes. The stability and subcellular localisation of circadian proteins is regulated by kinases and phosphatases (inset box). From Barnard AR, Nolan PM (2008)[3]

The circadian rhythm in the SCN is generated by a gene expression cycle in individual SCN neurons. This cycle has been well conserved through evolution, and is essentially similar in cells from many widely different organisms that show circadian rhythms. The molecular circadian oscillator incorporates many transcriptional and posttranslational elements, and disruptions in many of these in mice can lead to behavioural disturbances that mirror human neurological and psychiatric disorders (see Figure).

These genes encode various transcription factors that regulate the expression of other proteins. The products of clock and cycle, called CLK and CYC, belong to the PAS-containing subfamily of the basic-helix-loop-helix (bHLH) family of transcription factors; these proteins associate to form a heterodimer (CLK-CYC) which in turn initiates the transcription of two other genes, per and tim, whose protein products also dimerize and then inhibit their own expression by disrupting CLK-CYC-mediated transcription. This negative feedback mechanism gives a 24-hour rhythm in the expression of the clock genes. Many genes are suspected to be linked to circadian control by "E-box elements" in their promoters, as CLK-CYC and its homologs bind to these elements.

The 24-hour rhythm could be reset by light via the protein CRYPTOCHROME (CRY), which is involved in the circadian photoreception in Drosophila. CRY associates with TIM in a light-dependent manner that leads to the destruction of TIM. Without the presence of TIM for stabilization, PER is eventually destroyed during the day. As a result, the repression of CLK-CYC is reduced and the whole cycle reinitiates again.

In mammals, circadian clock genes behave in a similar manner. CLOCK (circadian locomotor output cycles kaput) was first cloned in mouse and BMAL-1 (brain and muscle aryl hydrocarbon receptor nuclear translocator (ARNT)-like 1) is the primary homolog of Drosophila CYC. Three homologs of PER (PER1-3) and two CRY homologs (CRY1,2) have been identified . TIM has been identified in mammals, however, its function is still not determined. Recent research suggests that, outside the SCN clock, genes may have other important roles as well, including their influence on the effects of drugs of abuse such as cocaine.[4][5]

To regulate other areas of the brain, the neurons in the SCN must communicate circadian information by sending messages in the form of action potentials in a 24-hour rhythm. Such rhythmic changes in electrical activity have been measures in vivo, and even persist when slices of the SCN are maintained in vitro. At mid-day, the firing rate reaches a maximum, and, during the night, it falls again. However, how the gene expression cycle (the so-called 'molecular clock') connects to the neural firing remains unknown.