Streptococcus pyogenes is also known as Group A streptococci (GAS). It is a Gram-positive, nonmotile, non-sporeforming coccus. [1]. They typically appear in purulent lesions or broth cultures as 0.5 to 1.0µm spherical or ovoid cells in chains of short to medium length (4 to 10 cells) [2]. 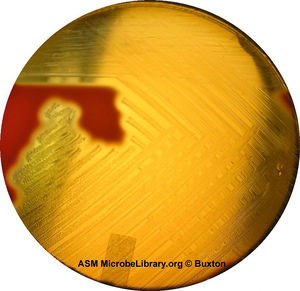 Growth is optimal on blood agar but is inhibited if the medium contains a high concentration of glucose.[2] On blood agar plates colonies are usually compact, small and surrounded by a 2-3 mm zone of beta hemolysis (complete lysis of red cells surrounding the colony) that is easily seen and sharply demarcated. This type of reaction has long been used to classify the streptococci. Group A streptococci is a strict human pathogen, and no other known reservoir or species is affected by diseases unique to this organism [3]

This pathogen is responsible for a vast number of human infections that range from uncomplicated conditions to clinically severe invasive diseases. Some of the diseases are: pharyngitis (most common), tonsillitis (commonly referred to as strep throat), sinusitis, otitis, pneumonia, impetigo, erysipelas, cellulitis, joint or bone infections, necrotizing fasciitis, myositis, meningitis, endocarditis, scarlet fever, rheumatic fever and glomerulonephritis (the last two as post streptococcal sequelae), [1] [2] All of these diseases are most common in settings of poverty. By 2005 it was estimated that there were at least 517 000 deaths each year due to severe GAS diseases. They estimated that there are at least 1.78 million new cases each year and a prevalence of at least 18.1 million cases. Most of which are rheumatic heart disease (at least 15.6 million cases). GAS is an important cause of morbidity and mortality [4]

In 2001 Ferretti et al. published the complete genome of an M1 strain GAS. The genome sequence was determined using whole-genome shotgun approach. The genome is a circular chromosome that consists of 1, 852, 442 bp and contains about 38.5% G+C. One thousand two hundred and eighty two out of 1, 752 ORFs (83%) could be assigned a putative function or have a homolog from another bacterial species. About 615 of these ORfs have an unknown function, 46 are virulence factors, 101 are involved in amino acid transport and metabolism, 109 involved in carbohydrate transport and metabolism, 132 function in translational and ribosomal structure and biogenesis, 79 are stable RNA, 21 function in cell division and chromosome partitioning, 57 in cell envelope biogenesis, outer membrane, 21 in cell motility and secretion, 32 in coenzyme metabolism, 90 in DNA replication, recombination and repair, 58 in energy production and conversion, 172 have a general function prediction only, 48 function in inorganic ion transport and metabolism, 40 in lipid metabolism, 65 in nucleotide transport and metabolism, 38 in posttranslational modification, protein turnover, chaperones, 41 in signal transduction mechanisms, 66 in transcription, 15 are putatively inactive genes. [4]

Group A streptococcus encodes the genes for some stress related proteins, it also has highly conserved genes responsible for osmoregulation. In addition there are genes present that encode proteins associated with “molecular mimicry” (the pathogen can alter its coat so that the host confuses it as its own).[4][6] 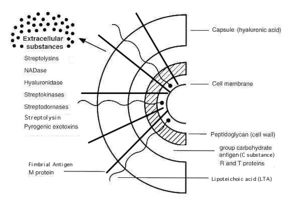 This pathogen is a facultative anaerobe. There are several metabolic pathways including a glycolitic pathway, synthesis of fatty acids, carbohydrate transport and metabolism, and nucleotide synthesis and transport.[3]

Group A streptococcus is strictly a human pathogen. Rodents have been rendered inadequate in the study of the organism because they do not mimic human GAS disease or our response to it. Although there has been success in infecting cynomolgus macaques with acute streptococcal pharyngitis that is not distinguishable from human infection[5]

Streptococcus pyogenes causes a wide range of human infections. This pathogen is considered versatile when it comes to epidemiology because it needs to overcome many conditions encountered in the host. Group A streptococcus needs to colonize the oropharynx successfully, which means that it has to overcome the natural defense found in saliva. It also needs to spread and survive in the blood. Many of its virulence factors aid the pathogen on its interaction with the host [7].

Streptolysin O: same as above but it is immunogenic

Group A streptococci colonize the oropharynx of healthy children and young adults. But about 5-15% of the population are carriers [1]. Highly selective culture techniques are required to detect small numbers of organisms in oropharyngeal secretions. In general GAS disease is caused by recently acquired strains that can establish an infection of the pharynx or skin before specific antibodies are produced.[3]

Not all of these are not always caused by Strep. pyogenes unless described as "streptococcal".

Acute streptococcal pharyngitis is the most common bacterial infection of the throat. If the patient is not treated the organism is present for 1-4 weeks after symptoms have disappeared. Spread is by direct contact with the mucosa or secretions.

Infection takes place through minor trauma (e.g., insect bites). It usually affects children in the 2-5 year old range. First it forms a small vesicle surrounded by an area of erythema. Over a period of days the vesicle enlarges, becomes pustular and later breaks to form a yellow crust.

This type of infection affects the skin and subcutaneous tissues, and usually occurs on the face. It is characterized by a spreading area of erythema and edema with rapidly advancing, well demarcated edges, pain, and systemic manifestations, including fever and lymphadenopathy.

The buccal mucosa, temples, and cheeks are deep red, except for a very characteristic pale area around the mouth and nose. The hard and soft palates are affected by punctuate hemorrhages and the tongue gets covered in a yellow-white secretion. On the second day of illness a diffuse red rash appears, spreading from the upper chest to the trunk and extremities.

This is a syndrome that can be caused by multiple organisms, often given the popular name "flesh eating bacteria."

This disease rarely occurs in children. Infection may arise after a surgical procedure, IM injections, IV infusions and minor insect bites. Compartment syndrome is often a present and predisposing condition, as in Fournier's gangrene. This severe infection leads to necrosis of subcutaneous tissue and the fascia surrounding it. Some symptoms include fever with sunburn rash, shock and lightheadedness, difficulty in breathing and cellulitis.

A condition secondary to an acute steptococcal infection, rheumatic fever is chronic and progressive, and damagesthe heart, especially its valves.

Soluble M1 Protein of Streptococcus pyogenes Triggers Potent T Cell Activation The M1 serotype is associated with many streptococcal infections and development of streptococcal toxic shock syndrome (STSS). Toxic shock syndrome is a very dangerous condition characterized by hypotension, tissue destruction and multiple organ failure. Bacterial superantigens are believed to play an important role in the pathogenesis of STSS. This superantigens induce potent inflammatory responses. In this study they demonstrate that soluble M protein from the M1 serotype is a potent T-lymphocyte activator, inducing remarkable T cell proliferation and induction of the Th1 type of cytokines.

Autophagy Defends Cells Against Invading Group A Streptococcus Autophagy is a catabolic process that involves the degradation of cytoplasmic components and the sequestration of cargo in an autophagosome that degrades upon fusion with the lysosome. What they saw in this study was that autophagy helps the host fight GAS infections. They used and autophagosome-specific marker (LC3) and studied autophagy after infection. They looked at GAS-containing LC3-positive autophagosome like vacules (GcAVs); and saw that about 80% of intracellular GAS were eventually trapped by the compartment. Also, animals that lacked autophagic function failed in trapping the organism in an effective manner.