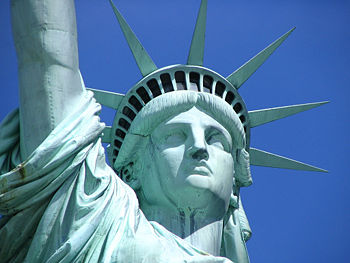 The Statue of Liberty (formal title: Liberty Enlightening the World) is a colossal statue located at Liberty Island, New York City. It was a gift of friendship from the people of France to the people of the United States as a way to symbolize the bond created in the American Revolution and is considered a universal symbol of freedom and democracy. The statue still stands today on Ellis Island, New York.

The man to come up with the original idea was Édouard René Lefèbvre de Laboulaye. French sculptor Frédéric Auguste Bartholdi was commissioned to design the statue, and engineer Gustave Eiffel for the structure. The statue is covered in copper, over the years due to weathering of the original metallic copper it changed to the green color it is now. The Statue of Liberty was dedicated on October 28, 1886.

The statue has a height of 151 feet (46 meters), with a foundation of 305 feet (92 meters). The statue depicts Lady Liberty, holding a flaming torch in the right hand and a plaque in the left hand. The plaque has an inscription, which reads "JULY IV MDCCLXXVI," referring to the date of the signing of the Declaration of Independence. At the foot of the statue are broken shackles representing oppression and tyranny. The crown of Lady Liberty has seven spikes, each one representing a continent.

The Statue of Liberty has been a U.S. National Monument since 1924, and is managed by the National Park Service. It has also been a UNESCO World Heritage Site since 1984.