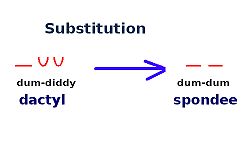 In substitution, poets have some flexibility with the rules; a dactyl can become a "spondee".

A spondee in epic poetry is a metrical foot similar to a dactyl but in which a poet has switched in a pair of two stressed syllables for a dactyl's single long syllable in an allowable substitution known as contraction. As a result of this contraction, a dactyl becomes a spondee. Epic poetry considered the beats and rhythms of words as well as accents and syllables in poems such as the Iliad and Odyssey by Homer and in the Aeneid by Virgil in deciding which words to pick and how to place them strategically in a line of verse for maximum effect. In English, a dactyl would sound like dum ditty while a spondee would sound like dum dum; examples of English terms which are spondaic include childbirth and bread box and shoeshine since in each instance there is practically an equal weight given to both syllables. Generally, given the nature of English, which features different accents on syllables within each word, it is difficult to compose a line consisting of all spondees. A spondee was an allowable convention in hexameter verse since it enabled more possibilities for word choices to fit the rather exacting rules of dactylic hexameter. Every foot in a hexameter verse has the potential to be either a dactyl or a spondee, although there are customs that the fifth foot usually remains a dactyl, and the last foot usually stays as an anceps. The word spondee comes from the Greek word libation.

Idealized hexameter verse, with spondaic contractions. The fifth foot is depicted as a pure dactyl. This is not to say that it may never be a spondee, but that it is rarely spondaic—only when the poet desires (say) some kind of solemn effect.