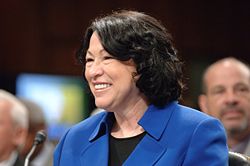 Sonia Maria Sotomayor (born June 25, 1954) is an Associate Justice of the Supreme Court of the United States. She was nominated by President Barack Obama on May 26, 2009 to replace David Souter. Sotomayor is the Supreme Court's third female and first Hispanic justice. Prior to this appointment, she was a judge on the U.S. District Court for the Southern District of New York (1992 – 1998) and the U.S. Court of Appeals for the Second Circuit (1998 – 2009).

In 1976, she married Kevin Edward Noonan and used the married name Sonia Sotomayor de Noonan. They divorced amicably in 1983. They had no children.[4]

After being admitted to the New York bar in 1980, she was hired as assistant district attorney in New York County.[5] Working in the trial division at a time when New York was going through a crime wave, she was given heavy caseloads and prosecuted a wide variety of cases. In 1983, she participated in the successful prosecution of Richard Maddicks in the high-profile Tarzan Murderer case.[6]

In 1984, she entered private practice, joining Pavia & Harcourt, specializing in intellectual property litigation and international law. She became a partner in the firm in 1988. She left in 1992, when she became a district judge. She also served on the board of the State of New York Mortgage Agency, [7], the New York City Campaign Finance Board,[8] and the Maternity Center Association.[9]

On November 27, 1991, she was nominated to the U.S. District Court for the Southern District of New York by President George H.W. Bush after recommendation by both New York Senators, Daniel Patrick Moynihan (D) and Al D'Amato (R)[10]. Confirmation hearings were held by the U.S. Senate Judiciary Committee in June 1992 which was led by a Democratic majority. The committee approved her unanimously. A vote on her confirmation was held up as the result of a Senate stand-off over another court nominee, but she was finally confirmed by a unanimous Senate on August 11, 1992.

Her most notable ruling was in the case Silverman v. Major League Baseball Player Relations Committee, Inc. [11] She issued an injunction against Major League Baseball, stopping the organization from unilaterally implementing a new collective bargaining agreement. Her ruling ended the 1994 baseball strike. The Court of Appeals upheld her ruling. The case won her the gratitude of many baseball fans and raised her profile.

On June 25, 1997, Sotomayor was nominated by President Bill Clinton to the Second Circuit, U.S. Court of Appeals. There was considerable delay in the scheduling of her confirmation hearings due to Republican opposition to her candidacy.

Judge Sotomayor was nominated to the court May 26, 2009 by President Barack Obama to replace retiring Justice David Souter. She was confirmed by the Senate August 6, 2009.

Confirmation hearings in the Senate Judiciary Committee began July 13, 2009. She was unanimously rated as "well qualified" by the American Bar Association.[12] The non-partisan Congressional Research Service concluded in a summary:

Perhaps the most consistent characteristic of Judge Sotomayor’s approach as an appellate judge has been an adherence to the doctrine of stare decisis, i.e., the upholding of past judicial precedents. Other characteristics appear to include what many would describe as a careful application of particular facts at issue in a case and a dislike for situations in which the court might be seen as overstepping its judicial role.[13]

Questioning during the hearings focused largely on three aspects of her record.

The first was a statement she had made on a number of occasions in speeches, and once in a publication (the spring 2002 issue of the Berkeley La Raza Law Journal), that led some of her critics to conclude she believed minority judges were better suited to their office than white judges:

I would hope that a wise Latina woman with the richness of her experiences would more often than not reach a better conclusion than a white male who hasn't lived that life.[14]

During the hearings, senators focused on the question whether the view expressed in this statement reflected President Obama's stated opinion that a judge requires empathy in order to function well. Sotomayor stated that she did not share the president's view and that her statement was an unsuccessful rhetorical flourish.[15]

The second matter that was raised was a remark she had made in 2005 at Duke University that the "court of appeals is where policy is made."[16] Conservative commentators and some Republican politicians balked at the statement, arguing that it amounts to an admission of judicial activism.[17] Both Sotomayor herself, in response to questions she received during the hearings, and many legal scholars and commentators, countered that the statement, especially when placed in the context of her entire address, merely reflects the natural consequences of the work of an Appeals Court judge, which is that any ruling has binding power on all citizens in the relevant circuit and thereby "creates" new "policy."[18] She explicitly rejected the notion that she thinks judges make the same type of policy as legislators.[19]

The third matter in the spotlight during the hearings was primarily raised because of its coincidental topicality: Sotomayor's involvement as Appeals Court Judge in the case Ricci v. DeStefano, which had been overturned by the Supreme Court two weeks before the hearings commenced. In this case, a number of white firefighters had sued the city of New Haven, Connecticut for racial discrimination by refusing to certify test results and thereby blocking their promotion, because no black firefighters had passed the same test. The city had cited fears of a Title VII law suit by the unsuccessful black candidates for disparate impact as reason for dismissing the test altogether. The district court had ruled in favor of the city and the U.S. Court of Appeals for the Second Circuit, with Sotomayor on the panel of judges deciding the case, had affirmed this ruling. The panel had first issued a summary order and then, after one of the court's judges objected and requested an en banc hearing, withdrew the order and instead produced a brief per curiam opinion[20] in which the panel adopted the district court's opinion without consideration of the constitutional claims of the appellants. The Supreme Court ruled on June 29, 2009 in a 5-4 decision in favor of the white firefighters that the Title VII claim was in fact a form of intentional and unconstitutional racial discrimination because the city of New Haven could not "demonstrate a strong basis in evidence that, had it not taken the action, it would have been liable under the disparate-impact statute."[21]

The case goes to the heart of arguments about racial identity politics in contemporary American society. Opponents of Judge Sotomayor's nomination stressed the fact that though only five justices disagreed with the district court's ruling, all nine of the justices disapproved of the method by which the Second Circuit panel had dealt with the case.[22] The Supreme Court criticized the Second Circuit panel for applying the wrong standard of review, something Republican senators alleged proved that Sotomayor was beholden to special rights for minorities rather than equal treatment under the law. Democratic Senator Charles Schumer (New York) accused Republicans of having a double standard:

In these cases [Ricci v. DeStefano and gun rights cases], she avoided making policy. (...) We're getting awfully close to a double standard here. [23]

White House spokesman Robert Gibbs criticized the Supreme Court for inventing a new interpretation to long-standing precedent on Title VII law and impeding opportunities for minorities in the workplace.[24]

During the Senate debate on Sotomayor's nomination, most Republicans opposed her nomination, claiming they were unconvinced by Sotomayor's responses to senators' worries about her views of judicial activism and also saying they remained concerned about gun rights and religious freedom if she were appointed to the court. Democratic Senator Patrick Leahy (Vermont), Chairman of the Senate Judiciary Committee, rejected these criticisms as baseless, citing her long record of equity.[25] Senator Max Baucus (D-Montana) commented:

Judge Sotomayor voted with the majority 98% of the time. Hardly a left-wing activist. In the rare cases where she held government action unconstitutional the decision was so clear that it was unanimous.[26]