See the tab above for Recipes of Shortbread. 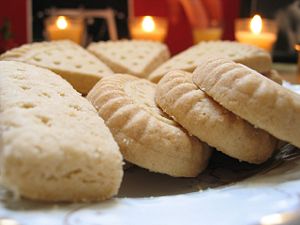 Shortbread is a butter cookie[1] made with a mixture of flour, sugar, and butter. It is generally thought to be of Scottish origin and hence is often referred to as Scottish shortbread, though it is also a favorite delicacy in many other countries as well. It is often associated with holidays such as Christmas and New Years.

Some variations, within limits, of the basic ingredients are often employed. For example, some rice flour can be used to make up the flour bulk, or brown sugar can be used instead of white. But in all cases, butter should be used for the shortening. There is no known diet version of shortbread.