A semiconductor is a substance with electrical conductivity intermediate between metals and insulators. Most commonly these materials are solids.

In liquid and solid materials where atoms are in close proximity to one another, the energy levels available to electrons fall into bands separated by energy gaps. The density of energy levels per unit energy as a function of energy might look as in the figure. The occupancy of this density of states by electrons relates to a semiconducting behavior for this material as follows: 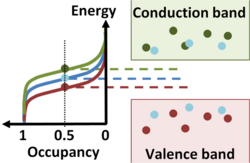 In the case where the impurity substitutes for a host atom in the semiconductor lattice, the explanation as to why impurities behave as donors or as acceptors is based upon the valence of the substituting atom. The idea is that the substitute must try to emulate a host atom in the lattice by approximating its electron distribution. Thus, acceptor impurities have fewer valence electrons than the host atoms and must "borrow" an electron from the host for this masquerade, becoming negatively charged, while donor impurities have "extra" valence electrons, and must yield an electron to the host and become positively charged.

For example, if a column III impurity like B, Al, Ga or In, is added to silicon, these trivalent atoms grab an electron because they have only three electrons to bond with neighboring atoms, while a silicon atom has four. Similarly, addition of column V atoms, like P, As, Sb, to silicon, which have five electrons in their outer orbitals require only four for bonding, and donate the fifth electron.

This picture is complicated in a compound semiconductor like GaAs (a III-V semiconductor) that has more than one type of atom in the lattice. So, for example, a column VI atom like S, Se and Te can act as a donor if it occupies the site of the column V As host atom, and column II atoms like Be, Mg and Zn can act as acceptors if they replace Ga host atoms. On the other hand, a column IV atom like Si can act as either a donor or an acceptor depending upon whether Si replaces Ga or As.

In a metal the electron density that responds to applied fields is so large that an external electric field can penetrate only a very short distance into the material. However, in a semiconductor the lower density of electrons (and possibly holes) that can respond to an applied field is sufficiently small that the field can penetrate quite far into the material. This field penetration alters the conductivity of the semiconductor near its surface, and is called the field effect. The field effect underlies the operation of the Schottky diode and of field effect transistors, notably the MOSFET the JFET and the MESFET.[1]

The change is surface conductance is caused because the applied field alters the energy levels available to electrons to considerable depths from the surface, and that in turn changes the occupancy of the energy levels in the surface region. A typical treatment of such effects is based upon a band bending diagram showing the positions in energy of the band edges as a function of depth into the material.

An example band-bending diagram is shown in the figure for a two-layer structure consisting of an insulator as left-hand layer and a semiconductor as right-hand layer. An example of such a structure is the MOS capacitor, a two terminal structure made up of a metal gate contact, a semiconductor body (such as silicon) with a body contact, and an intervening insulating layer (such as silicon dioxide, hence the designation O). The left panels show the lowest energy level of the conduction band and the highest energy level of the valence band. These levels are "bent" by the application of a positive voltage V. By convention, the energy of electrons is shown, so a positive voltage penetrating the surface lowers the conduction edge. A dashed line depicts the occupancy situation: below this Fermi level the states are occupied and above it they are empty, assuming zero temperature. At operating temperatures, however, some electrons populate the conduction band, and some vacancies (holes) populate the valence band.

The example in the figure shows the Fermi occupancy level in the bulk material beyond the range of the applied field as lying close to the valence band edge. This position for the occupancy level is arranged by introducing impurities into the semiconductor. In this case the impurities are so-called acceptors which soak up electrons from the valence band becoming negatively charged, immobile ions embedded in the semiconductor material. The removed electrons are drawn from the valence band levels, leaving vacancies or holes in the valence band. Charge neutrality prevails in the field-free region because a negative acceptor ion creates a positive deficiency in the host material: a hole is the absence of an electron, it behaves like a positive charge. Where no field is present, neutrality is achieved because the negative acceptor ions exactly balance the positive holes.

Next the band bending is described. A positive charge is placed on the left face of the insulator (for example using a metal "gate" electrode). In the insulator there are no charges so the electric field is constant, leading to a linear change of voltage in this material. As a result, the insulator conduction and valence bands are therefore straight lines in the figure, separated by the large insulator energy gap.

In the semiconductor at the smaller voltage shown in the top panel, the positive charge placed on the left face of the insulator lowers the energy of the valence band edge. Consequently, these states are fully occupied out to a so-called depletion depth where the bulk occupancy reestablishes itself because the field cannot penetrate further. Because the valence band levels near the surface are fully occupied due to the lowering of these levels, only the immobile negative acceptor-ion charges are present near the surface, which becomes an electrically insulating region without holes (the depletion layer). Thus, field penetration is arrested when the exposed negative acceptor ion charge balances the positive charge placed on the insulator surface: the depletion layer adjusts its depth enough to make the net negative acceptor ion charge balance the positive charge on the gate.

The conduction band edge also is lowered, increasing electron occupancy of these states, but at low voltages this increase is not significant. At larger applied voltages, however, as in the bottom panel, the conduction band edge is lowered sufficiently to cause significant population of these levels in a narrow surface layer, called an inversion layer because the electrons are opposite in polarity to the holes originally populating the semiconductor. This onset of electron charge in the inversion layer becomes very significant at an applied threshold voltage, and once the applied voltage exceeds this value charge neutrality is achieved almost entirely by addition of electrons to the inversion layer rather than by an increase in acceptor ion charge by expansion of the depletion layer. Further field penetration into the semiconductor is arrested at this point, as the electron density increases exponentially with band-bending beyond the threshold voltage, effectively pinning the depletion layer depth at its value at threshold voltage.