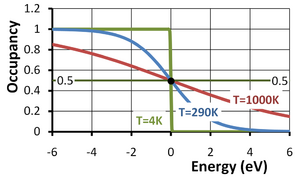 The Fermi function or, more completely, the Fermi-Dirac distribution function describes the occupancy of a electronic energy level in a system of electrons at thermal equilibrium. The occupancy f(E) of an energy level of energy E at an absolute temperature T in kelvins is given by:

Notice that for an energy level with E = EF and a degeneracy factor g = 1 (see below for a discussion of g), the occupancy is 1/2 regardless of temperature. The Fermi level EF thus can be referred to as the half-occupancy level.

On this basis the relative population of an energy E1 compared to one of energy E2 is:

which is the form derived using Maxwell-Boltzmann statistics, a classical approach based upon a gas of point particles exchanging energy by collisions to achieve thermal equilibrium.

Some impurities (or crystal defects) introduce "deep levels" closer to the middle of the gap and these can be charge-ambivalent: they can have either sign of charge or be neutral. Such mid-gap energy levels may serve as recombination-generation centers, assisting in generation or recombination of holes and electrons. They often are called Shockley-Reed-Hall centers.[1]

Suppose energies are measured from the valence band edge in a semiconductor, so the impurity energy level becomes Ea,d = E−EV and EF is replaced by EF − EV. Then the occupancy of the impurity level is given by:

where g is the so-called degeneracy factor. The origin of the degeneracy factor goes back to the underlying derivation of the Fermi function, which is fundamentally a determination of the most probable way n-electrons can be distributed among N energy levels while constrained by a fixed energy for the ensemble.[2] In this counting of permutations, the contribution of the impurities is included by making some basic assumptions about the impurity behavior that are essentially empirical in nature. For example, one may postulate that the impurity atoms divide into two populations, one with ni electrons and the other with ni+1 electrons. Moreover, we suppose that the electrons on any one atom in the first population may fall into any of g0 possible equivalent levels, while for those in the second population there are g1 possible levels. Then the degeneracy factor in the Fermi occupancy function is found to be g0/g1.[3] [4]

where the degeneracy factor of 4 stems from the possibility of either a spin-up or a spin-down electron occupying the level Ea, and the existence of two sources for holes of energy Ea, one from the "heavy" hole band and one from the "light" hole band.

In contrast to acceptors, donors become positively charged and tend to give up an electron. The number of positive donors compared to the total number of donors is then:

where now the degeneracy factor is 2 (because of the spin-up or spin-down possibilities for occupancy) and there is typically only one conduction band associated with the energy level Ed.[5]

For a system of independent electrons, this energy is the Fermi energy. Based upon the interpretation as the work necessary to add a particle to an ensemble of particles, the Fermi level in a system at thermal equilibrium must be the same at every point in the system. If that were not so, the system would change its overall energy by moving a particle from one location to another, contradicting the assumption of equilibrium.

If a material has a density of states D(E) that determines how many energy levels lie in the infinitesimal interval dE centered at energy E, then the number of electrons N in the system is given by:

which determines the position of the Fermi level EF in terms of the number of electrons N.

The approximate Boltzmann form of the Fermi function is introduced. The energy integral is usually called the "effective density of states" of the conduction band and denoted as NC. Then:

The density of states is considerably larger than the density of impurities, so the logarithm is negative, placing the Fermi level below the conduction band edge.

Assume the density of states in this integral can be approximated by a simple parabolic energy-wavevector relation in MC equivalent valleys. (The wavevector denoted k is related to the momentum of the particle p by p = ℏk, which is in turn related to the de Broglie wavelength of the particle.) For instance, the figure shows constant energy surfaces for the six equivalent valleys at low energies in the silicon conduction band, each ellipsoid of which is represented near the band edge by a parabolic energy wavevector relationship:

Here the density of states mass m is:

Combining the MC = 6 ellipsoids, the density of states D(E) at energy E becomes:

and the effective density of states is:

In a similar fashion, the Fermi level in a semiconductor containing negative acceptors is determined to lie just above the valence band edge.

As a consequence of the Fermi level representing the work done in addition of an electron, built-in potentials or contact potentials arise in joining inhomogeneous materials, for example, in pn-junctions. In this case, the Fermi level on the p-type side is positioned in energy near the valence band edge, reducing the electron occupancy of the valence band and thereby increasing the hole density, as expected for p-type material. On the n-type side, it is positioned near the conduction band edge, which makes the electron density high, as appropriate to n-type material. If these two materials are joined and electrons are allowed to flow freely between the two sides, equilibrium results when the work done in placing an electron on the p-side is the same as that done placing an electron on the n-side; that is, equilibrium requires the Fermi levels on the two sides must be the same. If that were not so, a current would flow in a wire joining the two sides, contradicting the notion of equilibrium.

As the figure shows, the flat Fermi level implies the band edges on the p-type side are shifted in energy compared to the n-type side. The potential energy difference is the difference in energy (expressed in eV) on the two sides between (say) the valence band edge and the Fermi level on each side. From an electrostatic point of view, this potential difference is correlated with a so-called double layer of charged ions, negative acceptor ions on the p-side and positive donor ions on the n-side. According to the Poisson equation, this charge leads to a potential. The amount of charge of each type is the same, because the widths of the negative ion region and the positive ion region adjust to make this true, so the bulk semiconductor on either side exhibits zero field and the potential is constant in the bulk materials. 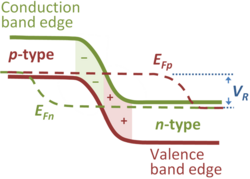 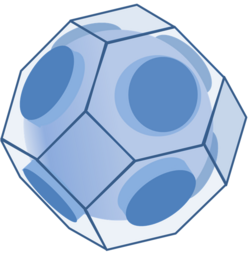 At zero temperature, the energy levels up to the Fermi energy are full, and those below are empty. For an assembly of particles occupying these energy levels, the equation E = EF defines a surface in the space of parameters determining the energy, such as the particle momentum. This surface, separating the filled from the empty energy levels, is called the Fermi surface.

For example, for an ideal "gas" of independent electrons, the energy of an electron in the gas is given by:

The energy of an electron in a solid is a more complicated function of the wavevector k. The figure shows a possible Fermi surface in a face-centered cubic lattice, as contained inside the Brillouin zone for this lattice, a volume in k-space that bounds the values of k corresponding to distinct energies.[9] As may be seen, far from being spherical, in a crystal the Fermi surface can be complex indeed.