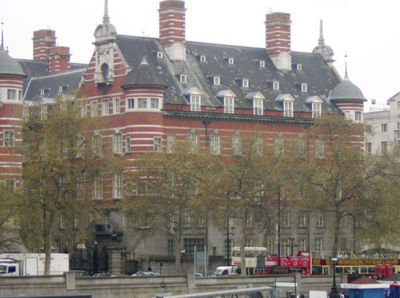 Scotland Yard is the traditional name of the headquarters of the London Metropolitan Police. The name derives from a small, enclosed field in the Whitehall district of London, which was adjacent to the force's original headquarters. The name has remained through subsequent moves, first in 1890 to "New" Scotland Yard, an ornate brick building in the Italian Revival style designed by Norman Shaw on the Victoria Embankment, and then in 1967 to the present New Scotland Yard on Victoria Street in Westminster. Because the original Detective Division of the Metropolitan Police had its offices in the rear of Whitehall Place in the first of these buildings, which were reached by crossing Scotland Yard, the name has been especially associated with the department's detective branch, known since 1878 as the Criminal Investigation Department or CID, but the phrase "Scotland Yard" has also been applied to the Metropolitan Police as a whole (as it is used here). 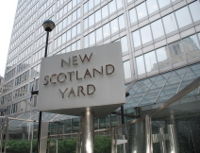 Scotland Yard was founded as the headquarters of the Metropolitan Police when the force was first established by Sir Robert Peel's Police Act of 1829. It opened on 29 September 1829, housing the two commissioners and their administrative staffs. It was not (and has never been) a police station in the usual sense, since each division of the police operates its own local stations, but over time has come to house other centralized units, such as the CID and the Special Branch, which function with a degree of independence in their specialized areas. Its first offices were at No. 4 Whitehall Place, and over the years expanded to encompass Nos. 3, 4, 5, 21, and 22 Whitehall Place, as well as Nos. 8 and 9 Great Scotland Yard, and Nos. 1, 2, and 3 Palace Place. The 1890 move to the Norman Shaw Buildings was necessitated by the lack of room at the original location for the force's growing administrative functions and numbers.

The new quarters at the Norman Shaw Buildings, originally planned for an opera house, were spacious but not entirely suited to office space. The Criminal Records Office was housed on the basement level, with its files on large shelves lining the tall central corridor. Some facilities, such as the Office of the Receiver, and the Forensic Laboratory (established in 1935), were housed off the premises, as was the Hendon Police College (later the Peel Center), which were responsible for training new officers. In 1967, the central offices moved from the Norman Shaw buildings to a new 20-story headquarters No. 10 Broadway at the corner of Victoria Street. 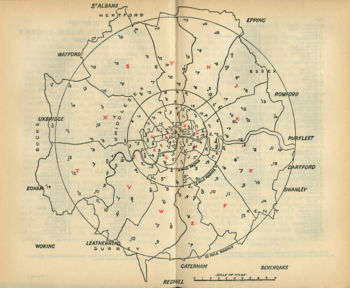 PD Image
Police Divisions as of 1929

It is not widely realized outside of Britain, but the one area that the Metropolitan Police District has always excluded is the City of London, which has its own entirely separate police force. The original district was divided further into seventeen divisions, each represented by a letter of the alphabet, as follows: A - Westminster; B - Chelsea; C - Mayfair and Soho; D - Marylebone; E - Holborn; F - Kensington; G - Kings Cross; H - Stepney; K - West Ham; L - Lambeth; M - Southwark; N - Islington; P - Peckham; R - Greenwich; S - Hampstead; T - Hammersmith and V - Wandsworth. Three new divisions were added in 1865: W - Clapham; X - Willesden and Y - Holloway, and lastly J Division (Bethnal Green) was created in 1886, for a total of twenty-one divisions until Z Division (Croydon) was added in 1921. The Thames River Police had no divisional letter, but the entirety of the Thames was its "beat". The diagram at right indicates all the divisional boundaries as they stood in 1929, with numbered indications for each Police Station.

This system of lettered divisions was maintained until 1985, when the Newman Restructuring Plan replaced them with a system of 67 divisions and subdivisions, which was further refined to 62 divisions in 1995. The entire divisional system, however, was abandoned in 1999 when it was replaced by the Borough Policing model. 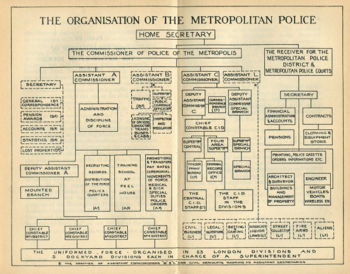 From their inception, the Metropolitan Police have been under the authority of the Home Secretary, a cabinet-level ministry of the British Government. Reporting to the Secretary was the Commissioner of Police for the Metropolis, a position originally shared by two men, but since the mid-nineteenth century held by one. At a parallel level of authority, the Receiver for the Metropolitan Police Districts had charge of all actuarial business and accounts for the police, as well as the management of all buildings and property. Under the Commissioner, a variety of Assistant Commissioners with differing duties and levels of responsibility have come into, and out of, existence. The longest-lasting arrangement was one with three Assistant Commissioners, known as A, B, and C, with A having charge of administration and discipline, B in charge of traffic and public carriage, and C in charge of criminal matters. It is this last position, commonly referred to within the force as the "ACC," which had the most serious and wide-ranging duties; under this position were the superintendents of the Criminal Investigation Division (known until 1946 as the Chief constable), the Special Branch, and the Area Superintendents, who oversaw CID officers in the various divisions. The rest of the (uniformed) force was placed under a Deputy to Assistant Commisioner "A". The chart at right shows the organization structure in this classic era, as it stood in 1929.

In addition to its regular, uniformed force, Scotland Yard has, over the years, added a number of specialized units, which themselves have undergone a good deal of change. The original Detective Department was established in 1842; after a scandal involving several of its senior detectives, it was reorganized as the Criminal Investigation Department or "CID" in 1878 by Howard Vincent. The next new unit was the "Special Irish Branch," formed in 1883 in response to attacks by the Fenians in the London area; as its mission broadened, it became known simply as "Special Branch", or SO12. Its functions were later merged with SO13, the Anti-Terrorist Branch, which itself was absorbed in 2005 into a new Counter-Terrorism Command. Other specialist branches included, at various times:

As this list demonstrates, there has been considerable re-organization of these police activities since they were first established, and while the general trend has been toward consolidation, there remains a certain degree of overlap between functions.