STS-118 successfully lifted off on August 8, 2007 from launch pad 39A at Kennedy Space Center (KSC), Florida and landed at the Shuttle Landing Facility at KSC on August 21, 2007.

It was the first flight of Endeavour since the STS-113 mission in November 2002, which was the last successful Space Shuttle flight before the loss of Space Shuttle Columbia on STS-107. STS-118 pilot Charles Hobaugh had been the entry team CAPCOM for STS-107. The mission added 2 more components to the International Space Station as well as bringing supplies for its crew. The completion of the mission left twelve flights remaining in the Space Shuttle program until its end in 2010, excluding two as-yet-unconfirmed Contingency Logistic Flights.

The mission marked the first flight of an Educator Mission Specialist. The program is the successor to NASA's Teacher in Space Project, which ended when the Space Shuttle Challenger broke apart 73 seconds after lift-off during STS-51-L in 1986. [1] Four educator mission specialists have been selected: Barbara Morgan in 1998 and three more educators in the astronaut class of 2004. [2]

During and after the mission, the media focused heavily on a small puncture in the heat shield, created by a piece of insulation foam that had come off the external tank of Endeavour during liftoff. Foam impact was the cause of the destruction of Space Shuttle Columbia, but this was a very small damage in comparison and in a much less critical area of the shuttle. KSC Launch Director Mike Leinbach mentioned in the post-flight press conference, that upon initial inspection on the ground "Endeavour appears to be the 'cleanest' post-flight orbiter since Return to Flight".

Number in parentheses indicates number of space flights by each individual prior to, and including, this mission.

Astronaut Clayton Anderson originally was slated to be launched to the ISS on this mission, but was moved to STS-117. His replacement was Al Drew.[3]

Prior to the Columbia disaster, the initial crew manifest for STS-118 was:

The STS-118 mission delivered and assembled the starboard S5 truss segment of the International Space Station, as well as External Stowage Platform 3, and a replacement Control Moment Gyroscope (CMG). The mission was also the final flight to include the Spacehab (Logistics Single Module). 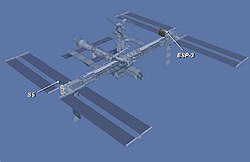 The Spacehab, a pressurized aluminium habitat that is carried inside the payload bay, has a capacity of 6,000 lb (2,722 kg), and carried a variety of cargo and research projects, including supply materials for the ISS. It returned with approximately 3,000 lb (1,361 kg) of cargo, including the MISSE PEC, a Department of Defense payload that had been installed on the ISS. Launched in July 2006, the MISSE PEC contains over 850 materials specimens that will be studied after their long-term exposure to the environment of space. 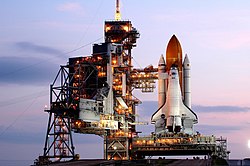 The mission was originally scheduled to be flown by Columbia; STS-118 would have marked that orbiter's 29th flight and its first visit to the International Space Station. However, the Columbia Space Shuttle Disaster altered the planned flight schedules, and the mission was rescheduled for Endeavour. STS-118 served as Endeavour's return to flight after a planned orbiter re-fit and maintenance period.

As a result of Endeavour's planned refit, STS-118 marked the debut of an upgraded power-distribution module, the Station-Shuttle Power Transfer System (SSPTS). SSPTS allows Endeavour to operate from ISS power supply, converting up to eight kilowatts (8 kW) of electrical power from 120-volts direct-current (120VDC) ISS main voltage to the 28VDC system used by the Shuttle Orbiter. SSPTS was outfitted to the ISS Pressurized Mating Adapter-2 (PMA2) during STS-116. These upgrades will allow orbiters to remain docked at the station for an additional three to four days during each of the remaining Shuttle missions.[6] [7][8]

Endeavour (OV-105) was moved from the Orbiter Processing Facility, bay OPF-2 to the Vehicle Assembly Building on July 2.[9] On July 10, Endeavour moved from the Vehicle Assembly Building to Launch Pad 39A. Moving at less than one mile per hour (1.6 km/h) atop the crawler-transporter, the move began at 8:10 p.m. EDT, and was "hard down" (secured in place at the pad) at 3:02 a.m. EDT, July 11.

The crew completed the Terminal Countdown Demonstration Test on July 19, and the Flight Readiness Review meetings were held on July 25 and 26, after which NASA managers declared STS-118 a "go" for launch.[10] The launch was delayed one day to repair a valve in the shuttle's crew cabin pressurization system.[11]

Commander Kelly and the crew arrived at Kennedy Space Center on Friday, August 3, for final launch preparations. The countdown clock began at 8:00 p.m. EDT Sunday, August 5, for the launch at 6:36 p.m. EDT August 8. 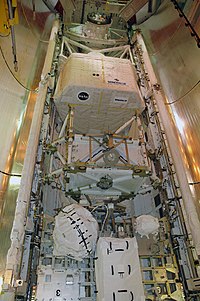 STS-118 included mission specialist Barbara Morgan, the first Mission Specialist Educator. Morgan trained as the backup to Christa McAuliffe, NASA's Teacher in Space candidate from 1985 to 1986. McAuliffe was killed in the space shuttle Challenger accident on January 28, 1986. While McAuliffe and Morgan were classified as spaceflight participants and not as mission specialists in 1986, after the Teacher in Space Project was cancelled, Morgan assumed the duties of Teacher in Space Designee, and continued to work with NASA’s Education Division until her selection as NASA's first Mission Specialist Educator in 1998. Morgan completed two years of training and evaluation, and began official duties in 2000.[12] The educator astronaut is a fully trained astronaut who performs all the same duties that an astronaut does.[13] Morgan became the first Mission Specialist Educator in space on STS-118, and will share what she learned from the experience with students during and after her flight.