The Royal Meteorological Society (RMetS) is the United Kingdom's professional society whose mission is "to advance the understanding of weather and climate, the science and its applications, for the benefit of all".[1] The RMetS plays an important role in the work of the United Kingdom's government, providing authoritative and objective advice for policy makers on issues such as climate change, global warming and weather forecasting.

The headquarters office of the RMetS is located in Reading, Berkshire.

The Society's affairs are run by a Council of Trustees and its Committees. The Council consists of 17 officers and ordinary members elected at the annual general meeting. The officers include a President, elected for a two-year term, who is supported by a Vice-President for Scotland and three other Vice-Presidents, the Treasurer, General Secretary, four main Committee Chairmen and ordinary members of Council.

The Council of Trustees meet four times a year to manage the governance of the Society, guided by the Society's Royal Charter, By-Laws and Standing Orders. The Council also sets the strategic plan of the Society and reviews the delivery of that plan.

The organizational diagram of the Council is presented below: 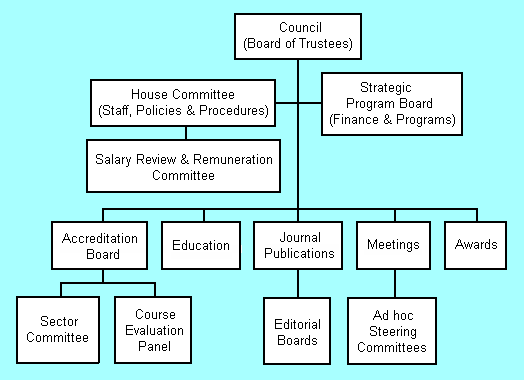 (CC) Diagram: Milton Beychok
The organizational diagram of the Council.[5]

The primary goals of the Society's strategic plan for the period of 2009 – 2011 are encapsulated in these seven themes:[6]

The RMetS has six types of members:

Th Society has ten Local Centers spread across England, Scotland and Wales to facilitate participation by members who cannot often travel to the Society's headquarters in Reading. The formation of additional Local Centers is encouraged.

Journals and other regular publications

The RMetS has a number of journals and other regular publications: