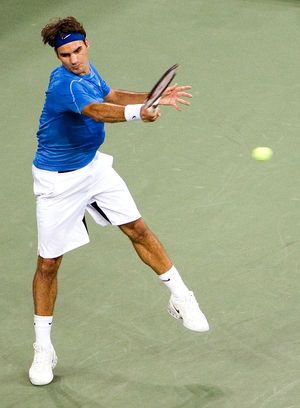 Roger Federer playing James Blake in the quarterfinals of the 2006 U.S. Open.

Roger Federer (August 8, 1981) is a Swiss professional tennis player who is currently ranked #2 in the world. Many have described Federer as one of the most dominant players in history, perhaps even the greatest of all time.[1]

The son of a Swiss father and South African mother, Roger Federer was born in Basel, Switzerland, and began playing tennis at the age of eight, but had a strong interest in association football (soccer) as well. At the age of 12 he began to focus fully on tennis and won the Wimbledon junior singles title in 1998 and was the top-ranked junior player in the world by the end of year at the age of 14. He turned professional in 1999 when he played for the Swiss Davis Cup Team. He won the bronze medal in tennis at the 2000 Olympic Games in Sydney and finished the year ranked at 29. In 2001 he beat former World No. 1 and seven-times Wimbledon champion Pete Sampras at Wimbledon and lost to British player Tim Henman in the quarterfinals. Yet he finished number six in the world in 2002.

Federer won his first Grand Slam title in 2003 at Wimbledon and was ranked number two in the world and in 2004 won the Australian Open, becoming the top-ranked player in the world. In 2005 Federer won his third consecutive Wimbledon title and won his second U.S. Open title. In 2006 he won the Australian again yet lost the French Open to the second-ranked player Rafael Nadal, who soon became Federer's main rival. But he was able to beat the Spanish clay court master on grass at Wimbledon. In the U.S. Open Federer beat American player Andy Roddick in the finals. In 2007 he won yet another Australian Open and lost again to Nadal in the French Open finals. At Wimbledon the same year Federer gained his fifth consecutive Wimbledon title, beating Nadal once again in a close 7-6, 4-6, 7-6, 2-6, 6-2 victory. [2] He has also twice been named Laureus World Sportsman of the Year in 2005 and 2006.