All radioisotopes are unstable isotopes of elements—undergo nuclear decay and emit some form of radiation. The radiation emitted can be one of three types, called alpha, beta, or gamma radiation.

(alpha) radiation - the emission of an alpha particle, which contains two protons and two neutrons, from an atomic nucleus. When this occurs, the atom’s atomic mass decreases by 4 units and atomic number decreases by 2.

(beta) radiation - the transmutation of a neutron into an electron and a proton. After this happens, the electron is emitted from the nucleus into the electron cloud.

(gamma) radiation - the emission of electromagnetic energy (such as X-rays) from the nucleus of an atom. This usually occurs during alpha or beta radioactive decay.

These three types of radiation can distinguished by their difference in penetrating power.

By neutron irradiation of objects it is possible to induce radioactivity, and this activation of stable isotopes to create radioisotopes is the basis of neutron activation analysis. One of the most interesting objects which has been studied in this way is the hair of Napoleon's head, which have been examined for their arsenic content.[1]

In this diagram the matrix atoms are shown in black, the element of interest is in blue while the interfering element is shown in green. The radioisotopes formed by the element of interest and the interfering element are shown in magenta and red respectively. In the first picture a sample containing black (matrix), green and blue atoms is obtained, the sample is processed to extract only the blue and the green atoms, then the atoms are irradiated with neutrons to render the atoms radioactive. After allowing the radioactivity due to the short lived isotopes to decay (magenta) the red radioisotope is counted

The effects of a series of different cooling times can be seen if a hypothetical sample which contains sodium, uranium and cobalt in a 100:10:1 ratio is subjected to a very short pulse of thermal neutrons. In the following bar chart the radioactivity due to each of these three elements is shown, note that the uranium-239 decays very quickly to neptunium 239Np, which decays with a halflife of 2.36 days. 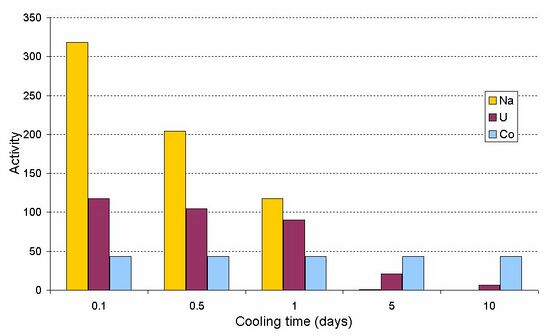 In this diagram the sodium activity (sodium-24) is on the left, the neptunium-239 activity in the centre and the cobalt-60 activity is on the right

One biological application is the study of DNA using radioactive phosphorus (32P). In these experiments, stable phosphorus is replaced by the chemical identical radioactive P-32, and the resulting radioactivity is used in analysis of the molecules and their behaviour.

Another example is the work done on the methylation of elements such as sulfur, selenium, tellurium and polonium by living organisms. Bacteria can convert these elements into volatile compounds,[2] it is thought that methylcobalamin (vitamin B12 alkylates these elements to create the dimethyls. A combination of Cobaloxime and inorganic polonium in sterile water forms a volatile polonium compound, while a control experiment which did not contain the cobalt compound did not form the volatile polonium compound.[3]. For the sulfur work the isotope 35S was used, while for polonium 207Po was used. In some related work by the addition of 57Co to the bacterial culture, followed by isolation of the cobalamin from the bacteria (and the measurement of the radioactivity of the isolated cobalamin) it was shown that the bacteria convert available cobalt into methylcobalamin.

Radiochemistry also includes the study of the behaviour of radioisotopes in the environment; for instance, a forest or grass fire can make radioisotopes become mobile again.[4] In these experiments, fires were started in the exclusion zone around Chernobyl and the radioactivity in the air downwind was measured.

It is important to note that a vast number of processes can release radioactivity into the environment, for example the action of cosmic rays on the air is responsible for the formation of radioisotopes (such as 14C and 32P), the decay of 226Ra forms 222Rn which is a gas which can diffuse through rocks before entering buildings[5][6][7] and dissolve in water and thus enter drinking water[8] in addition human activities such as bomb tests, accidents(for example [9]) and normal releases from industry have resulted in the release of radioactivity.

Chemical form of the actinides

The environmental chemistry of some radioactive elements such as plutonium is complicated by the fact that solutions of this element can undergo disproportionation[10] and as a result many different oxidation states can coexist at once. Some work has been done on the identification of the oxidation state and coordination number of plutonium and the other actinides under different conditions has been done.[4] This includes work on both solutions of relatively simple complexes[11] and work on colloids [12] Two of the key matrices are soil/rocks and concrete, in these systems the chemical properties of plutonium have been studied using methods such as EXAFS and XANES.[13][5][6]

The thermodynamics of the actinides controls much of their environmental chemistry, a series of reviews on uranium and the other actinides has been published by the NEA. [14]

While binding of a metal to the surfaces of the soil particles can prevent its movement through a layer of soil, it is possible for the particles of soil which bear the radioactive metal can migrate as colloidal particles through soil. This has been shown to occur using soil particles labelled with 134Cs, these have been shown to be able to move through cracks in the soil.[15]

The action of microorganisms can fix uranium; it is interesting to note that Thermoanaerobacter can used chromium(VI), iron(III), cobalt(III), manganese(IV) and uranium(VI) as electron acceptors while acetate, glucose, hydrogen, lactate, pyruvate, succinate, and xylose can act as electron donors for the metabolism of the bacteria. In this way the metals can be reduced to form magnetite (Fe3O4), siderite (FeCO3), rhodochrosite (MnCO3), and uraninite (UO2).[17] Other researchers have also worked on the fixing of uranium using bacteria[7][8][9], Livens FR et. al. (Working at Manchester) have suggested that the reason why Geobacter sulfurreducens can reduce UO22+ carions to uranium dioxide is that the bacteria reduce the uranyl cations to UO2+ which then undergoes disproportionation to form UO22+ and UO2. This reasoning was based (at least in part) on the observation that NpO2+ is not converted to an insoluble neptunium oxide by the bacteria.[18]