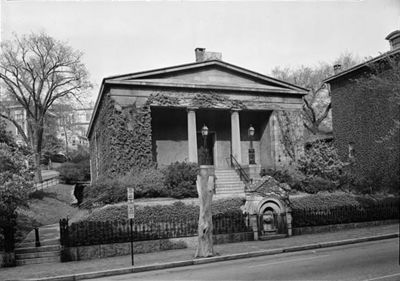 The Providence Athenaeum was founded in 1753 in Providence, Rhode Island, as the Providence Library Company, a member-supported library; it is the fourth-oldest library in the United States. Famous for its associations with Edgar Allan Poe and H.P. Lovecraft, it continues to serve as a library and meeting place for its members and the public at large. Its present building, a Greek-revival style building on Providence's historic Benefit Street, was built in 1838.

The Athenaeum ran into financial difficulties in the late 1990's, and by the start of the 2000's its situation was increasingly dire. After considerable controversy, the directors decided to part with the library's massive double-elephant-folio edition of John James Audubon's bird prints, which was sold at auction at Christie's in December of 2005 for five million dollars. Today, the Athenaeum is one of only 19 private membership libraries remaining in the United States.