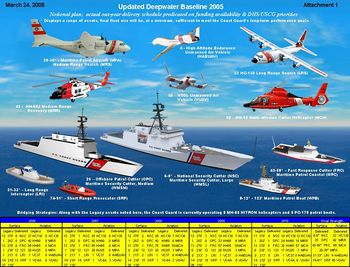 (PD) Image: USCG
Poster of Project Deepwater's projects approximately a year prior to management being returned to the Coast Guard.

Project Deepwater was an ambitious plan to upgrade the capabilities of the United States Coast Guard following al-Qaeda's attacks in the Continental USA on September 11th, 2001.[1][2][3][4][5] A consortium of Aerospace companies Lockheed Martin and Northrop Grumman were originally the "lead systems integrator". The consortium of the two companies originally enjoyed a controversial amount of authority overseeing subcontractors. Several of the subprojects the consortium oversaw went overbudget, were delayed, or were total failures. In 2007 Thad Allen, then the Commandant of the Coast Guard, announced that the Coast Guard would take over direct management of all the projects.

The USCG Island class cutters were required a mid-life refit. The refit was to add capabilities, as a stop-gap, until more modern vessels like the Fast Response Cutter was ready. Eight of the 57 vessels of the class were extended, to add a stern launching ramp. Their refit went over-budget, was delayed, and, when the extended vessels were relaunched, they were found to be fundamentally unsafe.

The replacement for the Island class cutters was to be the Fast Response cutter, which was to be built incorporating novel materials, like a composite hull. In 2007 Allen announced that the original design would be abandoned, and an alternate design, Fast Response Cutter -- version B, would be built instead. The alternate design would focus on proven, "off the shelf" technology. The alternate design had a steel hull, and aluminium superstructure. Its design was a modification of a proven design licensed from the Dutch shipbuilding consortium the Damen Group.