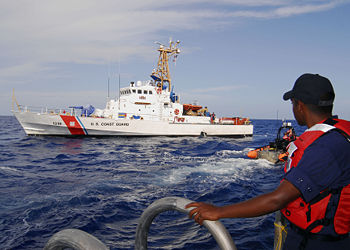 Its stated mission is to protect the public, the environment, and the United States economic and security interests in any maritime region in which those interests may be at risk, including international waters and America's coasts, ports, and inland waterways.[1]

The Coast Guard's official motto is Semper Paratus, meaning "Always Ready". Its unofficial motto, from its Lifesaving Service ancestry, is "You have to go out. You don't have to come back.:

Coast Guard functions began with the Revenue Cutter Service, which was founded on August 4, 1790 as part of the Department of the Treasury. In 1915, the United States Coast Guard was formed from a merger of the Revenue Cutter Service and the Life-Saving Service. In 1939, it also assumed the responsibilities of the Lighthouse Service, and, in the Bureau of Marine Inspection and Navigation to the Coast Guard.

The Coast Guard has an exceptionally wide range of safety, law enforcement, and national security functions, which fall under the broad categories of:

Coast Guard SAR communications have been based on a now-outmoded VHF communications ssytem called NDRS. This has no direction finding capabilities, gaps in geographic coverage, and was based on single channels that allowed neither broadcasts nor multiple simultaneous calls.

Rescue 21 encompasses a number of new technologies, many based on GPS. While there is a capability, in the new satellite-based Emergency position indicating radio beacon (EPIRB) program, to do direction-finding based on time-of-arrival of signals at multiple satellites, this is not needed if the beacon determines its own position with GPS, and includes that information in its signal.

Digital selective calling and other digital technologies increase system capacity which is being strained by increases in recreational boating and maritime trade. These increases involve the somewhat different requirements of inland, coastal, and deep-water navigation and communications.

Rescue 21 also addresses new homeland security requirements. Cargo ships greater than 300 tons, and all passenger vessels, are required to install the automatic identification system (AIS), which is a continuously operating transponder system much as used in air traffic control. AIS, like another aviation system, also allows vessels to detect potential collisions without intervention by the control system.

A vessel that showed up on radar or other sensors, but was not sending verifiable AIS signals, would be immediate cause for investigation.

Due to its early roots in the United States Revenue Cutter Service all the Coast Guard's larger vessels are called cutters. The smallest cutters are those in the 87 foot Marine Protector class, staffed by a complement of just ten sailors. The largest cutters displace thousands of tons, are staffed by complements of hundreds, and are capable of missions lasting longer than a month.

The Coast Guard has a history of sending cutters and smaller patrol boats on extraterritorial missions.[2]

The Coast Guard currently possesses just three large icebreakers that are used for polar research, the USCGC Polar Star, USCGC Polar Sea, and the newer USCGC Healy. The Polar Star and Polar Sea are approaching the end of their useful life, and their have been debates as to whether to scrap them, and replace them with newer vessels, at a cost of close to a bilion dollars each, or to spend hundreds of millions to refurbish them.

The Coast Guard launched the USCGC Mackinaw in 2008. The Mackinaw is the second icebreaker of this name, and it replaced its predecessor on the Great Lakes. The Mackinaw uses a new propulsion and icebreaking technique, that both increase its comfort level of its crew, in open water, and increases its ability to break ice. Unlike traditional icebreakers, the vessel has a conventional bow.

The Coast Guard's Polar class icebreakers and the largest cutters have a rear landing deck, and a hangar for operating light utility helicopters. The Coast Guard operates several classes of shore based helicopters.