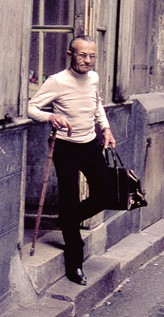 He was the son of a house painter and decorator specializing in marble and wood imitation; his mother a dressmaker, and his aunt an ironer. Molinier's school years were spent with the Brothers of the Agen "Ecoles chrétiennes", although he pretended he had been educated by the Jesuits. At the age of 13, he began working with his father as an apprentice painter and took evening courses at the Agen Municipal School of Drawing. Having been in love with his younger sister for a long time, in 1918, he took a photograph of her on her deathbed : later he said that, on that occasion, he caressed her legs and ejaculated on the First Communion dress she was wearing. Fantasm, pure fabrication or reality ? Anyway, it was the starting point of his quest for an androgynous identity, which would be a recurring theme throughout his life and work.

Around that date, he settled down in Bordeaux, place de la Bourse, in the Saint-Pierre Quarter. The following year, he set up his own business, as a house painter. He did his military service from 1920 to 1922, then stayed in Paris where he visited museums frequently. In 1923, he moved to 5 rue du Parlement-Saint-Pierre, still in the Bordeaux Old Quarter.

The first exhibition of his paintings took place in 1927. Every year until 1951, he showed several paintings (figurative or fauve landscapes and portraits) in the Bordeaux "Salons". In 1928, he exhibited a painting in Paris, at the famous "Société Nationale des Beaux-Arts", and founded the "Société des Artistes indépendants bordelais" together with several other painters. During 1931, he moved to the apartment where he would stay for good and would have his artist studio ("L'Atelier du Grenier Saint-Pierre"), 7 rue des Faussets, in the Bordeaux Old Quarter.

In 1940, Molinier was mobilized as a male nurse, then taken prisoner by the Germans; after being demobilized, he took refuge in the Bordeaux countryside with his family. Four years later, his father committed suicide by overdosing on medicine.

The following year, tired of his infidelities and provocative behaviour, his wife left their marital home. In 1950, he built a farcical "Premature tomb" topped with an engraved black cross:

"Here lies
Pierre MOLINIER
Born on 13 April 1900 died around 1950
He was a man without morals
He was proud of it and gloried in it
No need to pray for him."


He took photographs of himself, posing in his studio as crucified and having committed suicide, as well as on his deathbed in his apartment.

1951 was the major turning point in Molinier's artistic career: he broke off from the "Artistes indépendants bordelais", following a scandal at the Fall Salon caused by his veiled painting Le grand combat, which represents an entanglement of bodies engaged in a love joust. In 1952, he got in touch with the French novelist and art collector André Malraux in order to exhibit his paintings in Paris. Also, his daughter Françoise, with whom he had been in love for a long time, left the family apartment. He wrote to André Breton, the leading figure of the Surrealism movement, in 1955, and sent him a portfolio containing photographs of his paintings. Breton fell in love with "those magical works" and sent him a series of enthusiastic letters praising his work: "You are today a master in vertigo", he wrote in one of them.

In 1957, he bought a shady bar near Bordeaux called the "Texas-Bar" for his so-called "natural daughter" Monique, who was a notorious prostitute. Three years later, he was involved in a domestic dispute with his separated wife in their summer home where she returned from time to time, slapping her violently and firing a gun above the head of his cousin: for both acts, he spent a month in prison. He gave up his house painting business, in order to devote the rest of his life to his art. The following year he was convicted with fines and damages for his assaults; his wife was granted a divorce.

In Summer 1962, Raymond Borde came to Bordeaux to shoot the film Molinier, an homage to the painter's world (private screenings of an uncut version were held in 1964, and a public screening of the censored version in 1966).

His plans for publishing an album of photomontages on Le chaman et ses créatures began to take shape in 1966, and Roland Villeneuve, a specialist of the Devil, was approached to write the preface. Many publishers gave up printing the album, and it was eventually published in 1995.

In a particularly pivotal exchange of correspondence with the Austrian art historian Peter Gorsen, in December 1967 he met Hanel Koeck, a German sadomasochist and fetishist of legs and shoes. During his childhood, he was surrounded by women, and often wore their shoes and stockings, and so this meeting began a lengthy and impassioned correspondence with her, who paid him several visits. She became the model of many of his paintings and photomontages. Within this same period, a young friend and model, Jean-Pierre Bouyxou, shot Satan bouche un coin, a film where Molinier appears in his fetishist apparel.

In 1969, according to him, he ordered the exhumation of his father's corpse and kept his bones inside a wooden box in the shape of a small coffin, rue des Faussets. The same year, an album (Molinier) of his paintings was published by Jean-Jacques Pauvert.

In 1970, Molinier had a painful gall-bladder removed that had caused him constant suffering. Two years later, Peter Gorsen published in Munich an album of photographs and photomontages (Pierre Molinier, lui-même), with an important essay in German.

In March 1975, Molinier took a series of photographs of the young Swiss painter, Luciano Castelli, dressed as a transvestite, and another series with Thierry Agullo, an iconoclastic Bordeaux artist, on the theme of Indecency. At the end of the month, Peter Gorsen paid him a visit (for the first and only time) accompanied by Hanel Koeck.

The last of his family troubles occurred in September of this year, when his son Jacques died in an accident while handling explosives. As a consequence, he resumed his contacts with his daughter, Françoise.

At the end of February 1976, he took a series of photographs of Thierry Agullo, dressed in women's attire, continuing on the theme of Androgyny that had played a major part in his life.

On March 3rd, 1976, Molinier committed suicide by shooting himself in the mouth, something he had foreshadowed, time and again. His body was transferred to the Bordeaux morgue, then to the Faculty of Medicine, as he had bequeathed his body to the establishment in 1970. After being dissected, his remains were buried in a Bordeaux cemetery.

Pierre Molinier began his career by painting landscapes in the Impressionist and Fauve styles, with a brief attempt at Abstraction ; he was also known in the Bordeaux art circles as a talented portraitist. After the Second World War, he turned towards esoterism and then fetishistic eroticism, which had been underlying his personal life since adolescence. The feeling that he was fundamentally androgynous would soon be reflected in his erotic paintings (he adored and identified himself with his elder sister, his daughter and a few emblematic women - Emmanuelle Arsan or Hanel Koeck, for instance). Each painting from this period (approximately 70 of them) is the stunning result of a painstaking technical and ideological achievement : the work on the body forms, the transparent superposition of colours, especially in the green and reddish tones ("glacis" made of pigments symbolically mixed with his own sperm), the esoteric significance of the subjects always contribute to a unique and rare visual experience.

He developed an interesting correspondence with André Breton, the Pope of Surrealism, and sent him photographs of his paintings. Later, Breton, who wrote enthusiastic pages about them, integrated him into the Surrealist group and organized a solo exhibition of his works in Paris, in January-February 1956. But the extravagant behaviour of Molinier in sexual matters and his blasphemous tendencies in some of his paintings - for instance, Oh !... Marie, mère de Dieu (1965), where a crucified Christ is sucked and sodomized by two women - probably frightened Breton. As a result, Molinier did not participate in the 1965 International Surrealist Exhibition.

Essentially a leg fetishist, but also considering himself as a shaman, facetious and provocative, anti-bourgeois and anti-religious, Molinier enjoyed transgressing gender identification : his outstanding photographs greatly influenced the European and North American Body Art (Art corporel) in the early 1970s and continue to fascinate artists, critics and collectors today.

As of March 2016, 352 Molinier exhibitions have been recorded : 71 personal and 281 collective. Below are listed the main personal exhibitions (except for the major Bordeaux collective one in 2005).