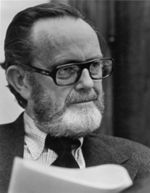 Philip Aloysius Hart (1912-1976) was an American politician who was a Democratic senator from Michigan from 1959 until his death in 1976. Hart was well known for his liberal political views and advocacy of progressive legislation; he was sometimes called the "Conscience of the Senate."

Hart was born in Bryn Mawr, Pennsylvania. He graduated from Georgetown University in 1934, then he studied law at University of Michigan Law School, graduating in 1937. In 1938 he began practicing law in Detroit. He served in the American army during the World War II, and was wounded in the Normandy D-Day offensive. After returning home he served in a variety of posts in the Michigan state government, and, as a U.S. Attorney from 1952 to 1953. He was the lieutenant governor of Michigan from 1955 to 1958, until his election to the Senate.

Hart was elected to the U.S. Senate in 1958. During his senatorial career, he was an outspoken liberal who served as the floor manager for landmark legislations on racial equality, such as Voting Rights Act of 1965 and the Civil Rights Act of 1968. He sponsored many bills on consumer protection, such as Truth in Packaging Act of 1965 and the Truth in Lending Act of 1966, and advocated for vigorous enforcement of antitrust laws. He was recruited by Keith Stroup to serve on the Board of Directors of NORML to decriminalize the use of marijuana. He was also an advocate of environmental protection measures against pollution.

In 1976, he died shortly before his retirement from the Senate.

The third U.S. Senate office building, the Senate Hart Office Building, was named after Philip Hart in 1987. The Philip A. Hart Memorial Lectureship was founded at Georgetown University Law Center.