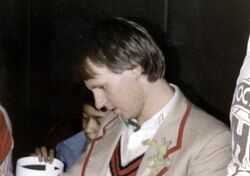 (CC) Photo: Tim Schnack
Peter Davison was the youngest actor to play the lead character in the original 1963-1989 series of Doctor Who, taking on the role from 1981 to 1984. Wearing his cricket-inspired outfit, here he meets fans at a 1983 convention.

Peter Davison (born 13th April, 1951) is an English actor, best known as the fifth to take on the lead role in the British science fiction series Doctor Who, from 1981 to 1984 - the youngest actor to do so until Matt Smith was cast for the 2010 series. Davison is also well-known on television for his portrayal of Tristan Farnon in the drama series All Creatures Great and Small (1978-1990). He continues to appear in film, theatre and television, including an appearance in the Spamalot production in the West End of London.